Pasture Pals? When to Be Wary of Multi-species Pasturing

Can you keep a donkey and a llama in the same pasture? 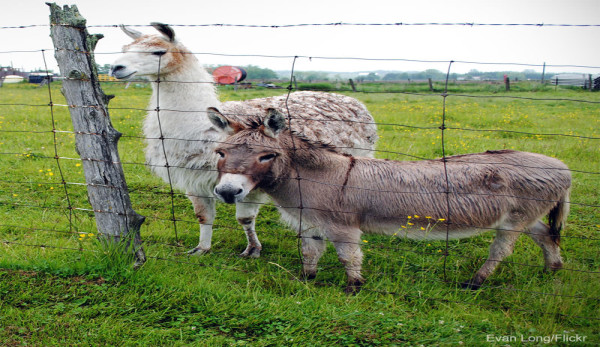 Can you keep aÂ donkey and aÂ llama in the same pasture? â€”Grace

Grace, the short answer to this question is probably. But animals, like humans, have distinct personalities. Some individuals get along with individuals of other species, and some donâ€™t. Itâ€™s complicated.

TakeÂ sheep and goats. Ours mingle during the daylight hours but have separate quarters at night. Thatâ€™s partially because weâ€™re fed different mineral supplements, but also because, for the most part, we goats tend to dominate sheep. A few of the goats, like Katy, my cranky but loveableÂ Alpine wife, andÂ Jimmy, the bratty LaMancha, bash sheep just for fun. The sheep donâ€™t seem to mind too much, but they deserve a peaceful place to sleep. They go in the sheep fold at night and each group of us goats has its own overnight pen and shelter.

There can be exceptions, though. My boy, Hutch, likes to jump the fence between the area where he lives with ourÂ Boer goats and the old ramsâ€™ paddock. Then he eats though old ramsâ€™ feed. Though goats usually dominate sheep, one of the rams got mad and head-rammed one of Hutchâ€™s front legs, hard. Now Hutch has a permanently bent knee.

When deciding whether to house your animals together, nutritional needs factor into the equation, too.Â  For instance, we goats requireÂ copper in our diets, but excess copper is a poisonous to sheep. Otherwise our vitamin-mineral needs are much alike, so Mom and Dad keep sheep mineral tubs in our shared commons, but only put goat mineral tubs in us goatsâ€™ nighttime quarters. They could do like many folks who keep sheep and goats together: Put sheep minerals in holders close to the ground and goat minerals atop a platform that goats that have to climb up on to reach it (most sheep are crummy climbers).

Copper can be a bad thing about keepingÂ pigs orÂ chickens and sheep together, too, because pig and chicken feed is high in copper. In fact, sheep can be poisoned by grazing on pasture that has been fertilized using pig or chicken manure.

Something else to remember when keeping pigs with other species is that adult hogs occasionally kill and eat newborn kids and lambs. Yikes!

Sex can make a difference too. Female llamas and castrated male llamas (geldings) makeÂ wonderful guardians for sheep and goats, but un-castrated males usually donâ€™t. Thatâ€™s becauseÂ male llamas breed females while the female is “kushedâ€ť (that means lying on her tummy with her legs tucked under her body). Some males get confused and think if a sheep or goat is lying down itâ€™s because the sheep or goat wants the llama to help her make a baby. So the llama plops down on her and she gets smothered or crushed.

Uncastrated male donkeys, called jacks, tend to make poor guardian animals, too. While female donkeys (jennies) and geldings usually bond with their charges, jacks have been known to attack, stomp and kill sheep and goats.

EvenÂ horses andÂ cattle arenâ€™t a sure thing. Our horses, miniature horses, donkey, steer andÂ water buffalo live together in perfect harmony, but some horses chase cattle and some cattle with horns harass other species, like goats, sheep and horses!

The barnyard is not always a peaceful kingdom. Also keep in mind that llamas and donkeys greatly prefer companions of their own kind. You might be happier with a pair of llamas or a set of donkeys than keeping one of each.