By selecting the correct grasses, legumes and forbs for your agricultural or grazing needs, you are on your way to having a healthy and efficient pasture. 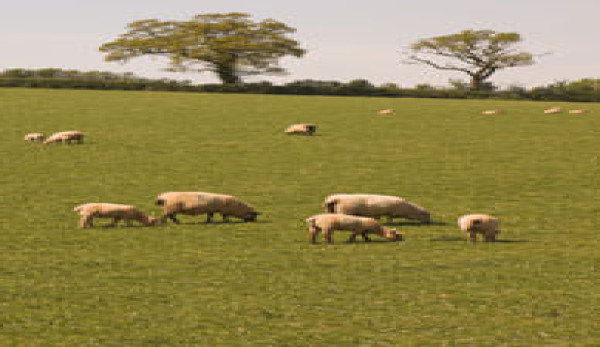 Of all the plants, the grasses are the most important to man. Grasslands‚ÄĒfrom improved pastures to natural rangelands‚ÄĒcover more than half of U.S. land area, not only providing forage for livestock and wildlife but also helping to stabilize soils and to reduce erosion.

Within pastures and rangeland, there are three major plant groups:

These plants are¬†critical for most small farms, yet they‚Äôre often overlooked, underappreciated and undervalued by farmers. When you look at the pastures on your farm, you might think of them strictly as grass, but they are so much more. Pastures are complex environments that typically support many species of plants and creatures great and small, ranging from your¬†livestock to microbes, insects,¬†birds and wild animals.

Pasture Grasses
As the curator of the grass collection at the Smithsonian Institution‚Äôs National Museum of Natural History, Paul Peterson, PhD, is one of the world‚Äôs leading experts on the taxonomy of grasses. For more than 30 years he has studied the plants that make up the grass, or¬†Poaceae, family. With more than 11,000 species worldwide and more than 2,000 species in North America, grasses can be used on the farm for both agricultural and aesthetic purposes.

“Wheat, corn and rice are some of the most valuable agricultural grasses,‚ÄĚ Peterson says. “As for forage, there aren‚Äôt any grasses that livestock can‚Äôt eat. Some are a little better as far as nutrient levels than others, but livestock can eat any grass and they can survive off of any grass that grows in North America.‚ÄĚ

In the horticultural realm, though, more and more people are looking to grasses for their appealing look.

“Thirty years ago, the only horticultural interest in grass was for use in lawns, but now a lot of¬†native grasses are being brought into cultivation because they look nice and people want them in their gardens.¬† They are appreciated just for their beauty.‚ÄĚ

Some grasses are annuals, which complete their life cycle in a single growing season; others are perennial plants, which can grow for years. Some are considered cool-season species, which dominate the northern tier of the country; others are warm-season species that can stand up to the heat of summer, particularly in the southern half of the country.

In all but a few extreme southern areas of the country‚ÄĒsuch as South Florida, the Gulf Coast and parts of Texas, New Mexico and Arizona‚ÄĒfarmers are learning to extend their growing seasons by planting both¬†cool-season and warm-season grasses.

True grasses start life as a monocot, or single-leafed seedling. As they grow, grass plants have a main stem, which is solid at each joint (or node) of the plant, and a leaf extending off the stem above each node. The leaves consist of two parts: a sheath, which fits around the stem, and a flat or narrow blade, which extends out from sheath and has parallel veins running vertically from the sheath. Grass plants have very fibrous root systems.

As wind-pollinated plants, grasses‚Äô minute flowers are not brightly colored nor sweet smelling because they do not need to attract birds or insects. Most grasses produce flowers and seed each year on little spikelets. Some perennial grasses can also vegetatively reproduce from horizontal stems, called rhizomes or stolons.¬†

Pasture Legumes
Plants of the Leguminosae family include a number of common perennial pasture and hay plants, such as alfalfa, birdsfoot trefoil,¬†clovers and vetches. Other members of the family include all types of¬†beans and peas; peanuts; and some species of herbs, shrubs and trees.

Legumes‚Äô seed-bearing pods characterize the 18,000 species of this family worldwide. Most legume species also have an association with root-borne bacteria (called rhizobia) that are capable of fixing nitrogen from the atmosphere and capturing it in the soil.

There are several significant differences between legumes and grasses:

Ken Hoffman, who runs Havenwood Farm and Stables with his wife Nancy in Newton, N.J., particularly likes including legumes‚ÄĒespecially “grazing alfalfas‚ÄĚ‚ÄĒin his pastures and the ones he renovates for others in his Farmette Services business. The Hoffman‚Äôs 84-acre farm includes about 32 acres of pasture that supports a dozen horses and more than 100 laying hens that are part of his commercial pasture-poultry operation. When improving pastures with legumes, he generally uses a no-till drill to interseed the legumes into the existing stand.

“I include legumes in every pasture because they are a great nitrogen source,‚ÄĚ he says, “and also because they have long tap roots, so they can really get down and help breakup any hardpan that might develop. Thanks to their taproots, they bring other nutrients up that are buried really deep in the soil.‚ÄĚ

Pasture Forbs
From a botanist‚Äôs point of view, forbs are all the only herbaceous (or non-woody) flowering plants other than grasses. Although this group includes the legumes, it also includes many other families.

For practical purposes, I think of forbs as all the miscellaneous flowering plants that grow in pastures, including a number of weedy species. Dandelions, for example, are a forb.

Forbs are dicots, many have a taproot, and all have colorful and fragrant flowers that attract insects. They often make good grazing plants, and sheep and goats do particularly well in pastures that have an abundance of forbs.Farmers often plant annual forbs, like kale, rape or turnips, as pasture crops to extend their grazing season because many of these plants can be grazed well into the fall and winter. Although most of the time forbs are planted as an annual forage crop in a field by themselves, Hoffman has¬†experimented with interseeding chicory, a perennial forb, into his pastures with his no-till drill and liked the results.

“Like the legumes, the chicory has a long taproot, which brings up nutrients, and the horses seem to enjoy it,‚ÄĚ he says. “Chicory is supposed to have medicinal value. Thomas Jefferson was big into growing chicory for forage and wrote extensively about it.‚ÄĚ

How to Improve Your Pasture
Growing up on a farm in Nebraska, Keith Johnson, PhD, professor of agronomy at Purdue University, developed a keen interest in forage crops for pasture and¬†hay that has stuck with him throughout his career.

“My masters‚Äô project was related to getting legumes into tall fescue to improve animal nutrition, and my PhD was looking at fertility influences on tall fescue in hay pastures.‚ÄĚ Today, Johnson‚Äôs research looks at how paddock numbers and forage types within a farm influence profitability for¬†cow and calf producers.

Based on his experience, Johnson has a great deal of advice about pasture improvement.

“It comes down to looking at your farm as a whole system. You have to decide what you want to do. If you want to have lactating goats, then keep in my mind there probably ought to be a legume component in your pastures; whereas, if you are going to have under-exercised geldings, they will get along nicely with a predominantly grass pasture with a minimal amount of legumes.‚ÄĚ

Although grasses, legumes and forbs have a wide range of areas in which they grow successfully, from mountain peaks to desert valleys to coastal areas, Johnson explains that not all species grow well in all areas of the country, nor in all soil conditions. Some require high moisture, others do well in drier areas; some thrive on sandy soils, others perform best on heavier soils.¬† Selecting the right forage species for your area is one of the keys to establishing and to maintaining healthy pastures.

“One of the frustrations I find today is that I get emails from all over the country asking me for advice, but I‚Äôm not the best person to advise someone in Colorado, or Georgia, or Oregon,‚ÄĚ he says, “I think everybody needs to have a list of professionals within their region that they can count on for solid advice. In the area of livestock and pastures, I‚Äôd say a veterinarian, an agronomist, an¬†extension agent and a financial advisor would be on the short list of professionals.‚ÄĚ

Hoffman agrees that you need to find people and resources that will help you understand your local circumstances.
¬†
“I learned a lot by doing research on the Internet and reading. I subscribe to Hobby Farms, Stockman Grassfarmer and Acres USA, and I‚Äôve accumulated about 50 books on soil fertility, plant management,¬†grazing management and similar topics. I also think you need to talk to people who are actually doing it in your area in addition to the extension office. You can spend a lot of money on seed yet have poor results because there are times of the year to plant and times not to plant; there are soil conditions you need to understand before selecting seed. It‚Äôs more involved than just throwing out seed if you want to have a good-quality pasture, so do your homework first.‚ÄĚ

Both Johnson and Hoffman agree on the first step: Establish a baseline of what you have now. They recommend having¬†soil tests done and reviewing soil maps (usually available from the Natural Resources Conservation Service). Also, for existing pastures, you need to inventory what is already there.

“It could be that you have some very desirable forages that are just waiting to explode with some tender loving care,‚ÄĚ Johnson says.

“Get your soil test done and then decide on what route you are going to go‚ÄĒorganic or synthetic‚ÄĒfor restoring fertility,‚ÄĚ Hoffman says. “If you opt to apply a synthetic fertilizer, you will have to give the field rest and keep your animals off it for a while, as synthetic fertilizers can be toxic immediately after application.‚ÄĚ

Hoffman also points out that you should select seed that is labeled as a forage variety.

“I can get Kentucky bluegrass or rye in commercial mixes, but I always look for varieties that are labeled for forage,‚ÄĚ he says. “The forage varieties may grow taller, stand up better to grazing pressure or be safer for livestock. For example, fescue grasses can have endophytes in them, which can cause toxic reactions in livestock; varieties labeled for forage are endophyte-free, whereas commercial varieties might not be.‚ÄĚ

Here are a few more points to consider in planning your perfect pasture:

Subdividing your pasture and using managed grazing techniques may be the best¬†fertilizer money can buy. By managing livestock through grazing with multiple paddocks, you have better control of what and when your animals eat; thereby improving forage quantity and quality.

About the Author: Carol Ekarius is a contributing editor to HF and hobby ranches in Colorado. She is the author of Hobby Farm: Living Your Rural Dream for Pleasure and Profit (Hobby Farm Press, 2005).