Follow the journey of constructing a crazy quilt to honor the memory of a loved one. 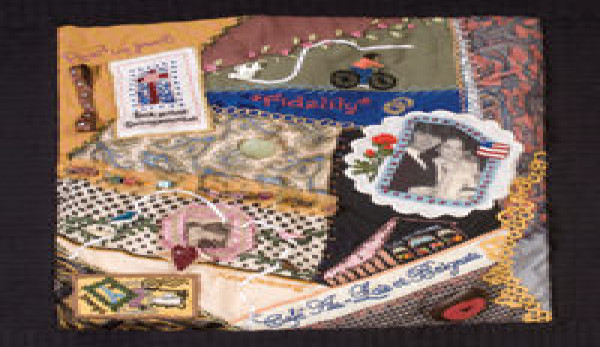 In November of 1990, when I was living on the Front Range of Colorado, I received a 24-page letter from my mother in Virginia. In it, she wrote:

ŌĆ£IŌĆÖm still enjoying the goodies from your last box. When I saw the pictures of the dark quilts, I thought, ŌĆśHey, thatŌĆÖs something Erin and I could do together even though weŌĆÖre geographically far apart!ŌĆÖ IŌĆÖve been thinking ŌĆśsomeoneŌĆÖ should make a quilt like the one that hung on the railing at DadŌĆÖs for years and years. It was made of silks, satins, taffetas, et cetera, and had bright flowers embroidered on the dark pieces. Also, colorful stitching (different kinds) between pieces. … What do you think? Do you want to play? If you do, we could agree on 12- or 18-inch squares and then each of us make them and take turns embroidering after machine sewing the pieces together. … I guess this will have to be a winter project as the next two months will probably be pretty busy.ŌĆØ

Sounds sweet, doesnŌĆÖt it? But I have a confession to make: I didnŌĆÖt really want to play. For one thing, I was working full-time and dealing with a difficult commute. For another, I didnŌĆÖt know diddly about quiltingŌĆöhad not sewn a thing since taking home economics in junior high. Granted, IŌĆÖd done some counted cross stitch, needlepoint, hooked rugs, candle-wicking, and even a couple of knitted and crocheted afghans, yet the thought of embarking on a full-sized quilt was overwhelming. And Mom was 2,000 miles awayŌĆötoo distant to show me how. Moreover, what she had in mind was a crazy quilt, the kind that was wildly popular in the late 1800s, created in part to show off oneŌĆÖs embroidery skillsŌĆöof which I had none! My response most likely lacked the enthusiasm she had hoped to generate.

As luck would have it, I happened to be in northern Virginia the following spring for a friendŌĆÖs wedding, and I traveled to Richmond to spend the next dayŌĆöMotherŌĆÖs DayŌĆöwith Mom. She and I sat at her dining-room table and chose fabrics, cut them into little pieces per the patterns she had made, and pinned enough together to form a square, more or less. It had been a late Saturday night, and I distinctly remember fighting the urge to take a nap face down on the table. We basted the pieces together but didnŌĆÖt get any further.

Mom passed away eight months later. Her sewing machine went to her daughter-in-law; the scraps of material, drawings and diagrams Mom had collected for the quilt went to her sister. My father asked me to empty MomŌĆÖs closets, and because she and I could wear the same size, I kept the clothes I especially liked and gave the rest away. Although I adjusted to the loss of my very best friend, I missed her terribly.

ItŌĆÖs funny how ideas take root in the firmament of the mind, even when neglected. As time passed, I kept thinking about MomŌĆÖs crazy quilt. It felt like unfinished business that deserved my best effort, like the tree she had wanted us to plant near her grave some day. I didnŌĆÖt really feel inspired, though, until it suddenly dawned on me that I could make the quilt all about Mom. Everything on it could depict her favorite things, places, people and experiences. I could use some of her clothes and DadŌĆÖs old ties. I retrieved MomŌĆÖs sewing machine from my brotherŌĆÖs attic, found a user manual for it, cleaned and oiled it, and replaced the broken light bulb. My aunt returned MomŌĆÖs bags of material and several photographs of the old crazy quilt that had ŌĆ£hung on the railing at DadŌĆÖs for years and years.ŌĆØ My excitement grew, and it no longer mattered that I didnŌĆÖt know how to actually construct the quilt.

The QuiltŌĆÖs Rebirth
I decided to visit a friend who had a machine-quilting business in Asheville, N.C. Rachel Reese had never made a crazy quilt but offered the use of her sewing room and gave me a crash course in quiltingŌĆödemonstrating, for example, how to use a rotary cutter and the importance of ironing as you go. Unfortunately, as I added to the original square Mom and I had created, it became an unmanageable amoeba! For one thing, the curved pieces didnŌĆÖt lay down right. For another, as it grew outward in every direction, I kept ending up with problematic ŌĆ£inside angles.ŌĆØ We concluded that crazy quilting is so named because one goes crazy doing it. Rachel tried to make sense of my amoeba but finally threw up her hands. She did, however, send me home with a list of books about crazy quilting and a bit of Stitch Witchery, an iron-on adhesive, in a little plastic baggie.