Pawpaw Is The Hot, New Fruit With A Very Old History

A tropical fruit that doesn't grow in the tropics (it loves the Midwest), pawpaw is a tasty, custard-like fruit with distinct advantages for small farmers. 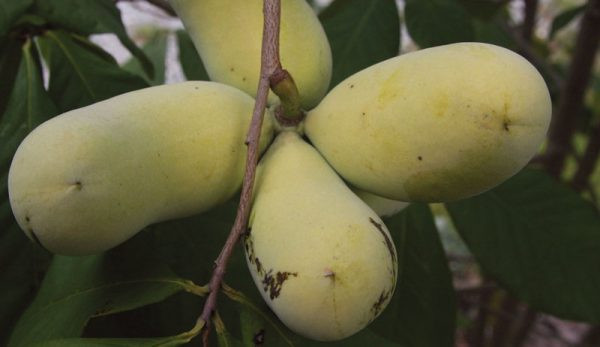 As edible plants go, the pawpaw is a rather odd duck. It‚Äôs a tropical plant that won‚Äôt grow in the tropics.

Andrew Moore, author of Pawpaw: In Search of America‚Äôs Forgotten Fruit, told the folks at the radio show The Splendid Table: ‚ÄúThe best thing you can do with a ripe, fresh pawpaw is just to eat it out of hand. Cut it in half, scoop it out and eat it like a custard in a cup, which is essentially what it is.‚Äù

Small farmers can do well with fruits such as pawpaw that you simply can‚Äôt get at the grocery store. They are too soft to travel.

The ripe, fist-size fruit tastes like a cross between a mango and a banana. Harvest season is through the height of summer when the pulp of these custard-like fruits can be frozen or turned into a memorable ice cream for value-added sales that can extend the season.

Pawpaws (Asimina triloba) are the largest native fruits in the United States, but you won‚Äôt find them easily unless you forage them on a river bank, know someone at your farmers market who‚Äôs growing them or grow them yourself.

And you may well want to grow them yourself. Both the fruit and young trees fetch a good price on the retail market.

The Price of a Pawpaw

Retail prices for fresh pawpaws at farmers markets and upscale grocery stores can range from $3 to $8 a pound‚Äîeven higher when bought online. Frozen pawpaw pulp can sell for $6 a pound or more.

If you enjoy plant propagation, there is demand for young trees from other farmers as well as homeowners. Across the country, at least 40 commercial nurseries sell pawpaw trees.

A 2-year old grafted apple tree may sell for $3 to $4. But seedling and grafted pawpaw trees in the retail trade sell for as much as $18 and $26 apiece. Trees started from seed will produce fruit in five to eight years. Grafted cuttings can produce fruit in as little as three to four years.

Pawpaws are also great for butterfly gardens. They attract the zebra swallowtail (Eurytides marcellus) for which they are the only host plant.

Read about a pawpaw seed germination experiment and how it turned out.

These native trees are hardy to zone 5. You’ll find pawpaws in 26 eastern states from Louisiana to Ontario and from the Atlantic to the Mississippi valley and beyond into Oklahoma.

But they can be grown anywhere in the continental U.S. with at least 160 frost-free days, 400 hours of annual chill units and 30 inches of rain or irrigation.

Pawpaws evolved on creek banks, so they can take deep shade and wet feet. In full shade, they‚Äôll rarely flower but will instead reproduce from root suckers that help hold those creek banks.

Surprisingly, they grow and fruit prolifically on sunny, dry sites. However, it‚Äôs best to shelter the saplings with shade cloth for the first couple years to help them get established.

As an understory tree, pawpaws can‚Äôt handle full sun when they are young. So set temporary posts that allow you to install shade cloth over the trees for the first couple of years or until they are at least 18 inches tall.

After their second year, they have enough of a root system to handle full sun. Water them up to three times a week in hot summers the first two years.

Pawpaws can grow from 15 to 25 feet tall depending on variety and conditions. The preferred spacing is 10 to 15 feet apart.

Unlike the modest leaves of peaches, apples and other fruiting trees, pawpaw leaves have a long, languid tropical look. They remind me of deciduous magnolias.

Despite leaves that evoke the Amazon, pawpaws can stand the cold winters of the Midwest, where they are surprisingly more common than in many counties in the subtropical southeast. Their nicknames‚Äî‚ÄúIndiana banana‚Äù and ‚ÄúMichigan banana‚Äù‚Äîmay tell you something.

Unlike many fruiting plants, pawpaws bear no kinship to the rose family, so the flowers are unusual, too. Flowers emerge before leaves in mid-spring and occur exclusively on previous year‚Äôs wood.

The small, silky, flared petals wear a lovely, deep-maroon color with bright stamens. The flowers‚Äîsmaller than a half-dollar‚Äîhang straight down and ironically have a disgusting, evil smell that attracts flies as pollinators rather than bees.

Perhaps fruit set can be boosted with a nearby soldier fly larvae station (for chicken feed). Soldier flies would likely be attracted to the flowers in large numbers.

You‚Äôll get the best flavor‚Äîand better production‚Äîif you have at least two cultivated varieties to cross-pollinate.

The late Chuck Marsh, founder of Useful Plant Nursery in North Carolina, used to say that the pawpaw ‚Äúmust be cross-pollinated with a seedling or another variety. It‚Äôs often helpful to pretend to be an insect and hand-pollinate for highest yields.‚Äù

Some say Shenandoah and Susquehanna are the biggest and best flavored with the fewest seeds. Others like the flavor of a variety called Mango.

Those who want to extend the lateness of the season should also choose Sunflower. An earlier crop comes from Rappahannock. I‚Äôve tasted over a dozen varieties at pawpaw festivals and don‚Äôt have a clear favorite. They all taste good enough to grow at home and sell at market.

A mild disease known as flyspeck grows on pawpaw. However, the fungus only grows on the surface of the fruit and doesn‚Äôt prevent it from being edible.

Critters such as foxes, opossums, squirrels and raccoons eat the fruit and may need to be deterred with flashing ribbon, inflatable snakes or other means. Fortunately, deer don‚Äôt like the leaves, twigs or fruit.

Moore says that one rarely gets to eat that first pawpaw on a young tree. (Raccoons often get the early fruit.) But your patience will be rewarded.

Pawpaws have more vitamins, minerals and amino acids than apples, peaches or grapes. Fruits may weigh from half a pound to a pound. The fruit of some cultivars may weigh up to 3 pounds.

A tree-ripened fruits‚Äô shelf life at room temperature may be three to five days. In the fridge, fruit can be held up to three weeks.

As with a few other fruits, pawpaws can be emetic when under ripe, so don‚Äôt rush a good thing.

‚ÄúDesserts like ice cream and pudding are great for pawpaws,‚Äù Moore says. ‚ÄúBasically, anything you can do with persimmons, you can do with pawpaws.‚Äù Pawpaw bread is another popular way to eat the fruit. I‚Äôve even heard of ‚Äúpawp¬≠cicles‚Äù made from pawpaw fruit.

Apparently, fermented pawpaws‚Äîin the forms of beer, cider, mead and brandy‚Äîwere favored by our founding fathers. It was the favorite dessert of George Washington, and Thomas Jefferson planted pawpaw trees at his home in Virginia. Lewis and Clarke even¬Ý relied on pawpaws on their journey of exploration.

Given that pedigree, I can‚Äôt think of any reason a small farm would want to forgo the joyjoy of the pawpaw.

This article originally appeared in the January/February 2020 issue of¬ÝHobby Farms¬Ýmagazine.