Make this traditional dessert recipe with gingerbread for a confection that appeals to more mature palates. 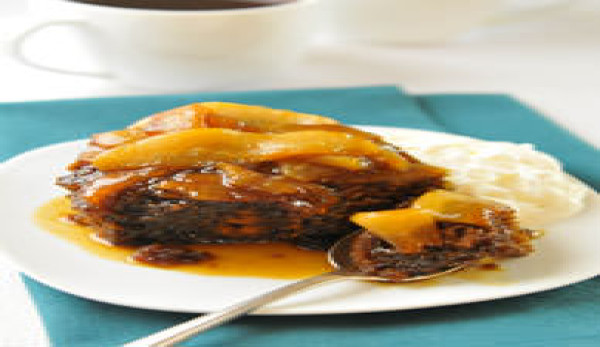 For best results, make this cake in a 10Â˝-inch cast-iron skillet.

In cast-iron skillet over medium heat, melt butter until foaming subsides. Reduce heat to low, then sprinkle brown sugar evenly over skillet bottom and cook, undisturbed, for 3 minutes. (Not all sugar will be melted.)

Arrange pears in circular design over melted sugar in skillet and cook, undisturbed, for 2 minutes. Remove from heat.

In large bowl, beat butter, brown sugar and egg with an electric mixer until creamy. Alternately add flour mixture and molasses mixture, 1/2 cup each at a time, beating at low speed after each addition until smooth.

Pour batter over topping in skillet, spreading evenly and taking care not to disturb pears. Bake on middle rack 40 to 50 minutes, until toothpick inserted in middle comes out clean.

Cool cake in skillet on rack for about 5 minutes. Run knife around edge of skillet. Invert large plate over skillet. (Choose a plate with circumference greater than the skilletâ€™s.) Using potholders to hold skillet and plate tightly together, carefully invert cake onto plate. Serve warm or at room temperature, topped with ice cream or whipped cream.