Mainly used as heavy draft work horses on farms, Percherons also can be ridden and shown; the breed was first developed in Medieval France to carry knights into battle. 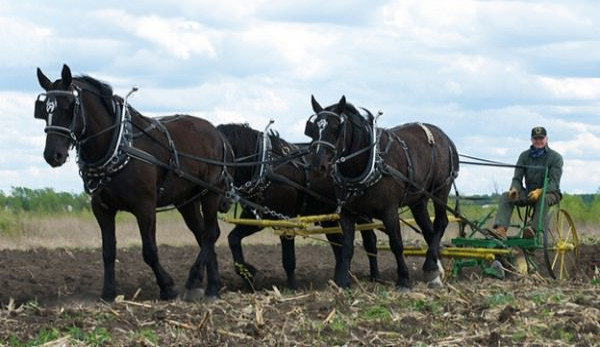 Use: Percherons in America still do heavy draft work on farms, especially those owned by the Amish. They also haul logs in forest work, pull wagons for hayrides and appear in parades. Some people whose who own this breed enjoy showing them at hundreds of draft horse shows throughout the United States and Canada. Percherons can also be ridden, and some have been known to make fine jumpers.

History: The Percheronâ€™s history goes back to Medieval France, when the breed was first developed to carry knights into battle. Much confusion exists about the actual breeds that went into making this horse, but some historians believe the Percheron is closely related to the horse used in the Roman invasion of Brittany. By the time of the Crusades, the Percheron was well established. During peacetime in Europe, the strong body and gentle personality of the Percheron made this horse a good choice for use on farms and in cities. The breed was used to pull the light coaches of French kings, and also called on to haul heavy stagecoaches. In the mid- to late-1800s, Americans needing good work horses for farming and to pull heavy carriages began using the Percheron. In the 1880s, nearly 8,000 draft horses were imported from France to the United States. When farmers in the United States and Europe began using tractors on their farms the early 1900s, draft horse populations began to get smaller. Some farmers still held onto a small number of Percherons out of sentiment, and the breed remained in the United States in small numbers. During the 1980s, the breedâ€™s population began to grow as draft horse breeds came into favor. Today, the breed is managed by the Percheron Horse Association of America. The American Livestock Breed Conservancy has listed the breed as recovering.

Conformation: Percherons are heavily muscled horses as well as powerful. They have a fairly long, level croup with a large, round hip. Good examples of the breed have a large and full prominent eye, a broad and full forehead, and a straight face. Percherons stand anywhere from 15 to 19 hands in height. Most are between 16.2 and 17.3 hands. They weigh in at around 1,500 to 1,800 pounds. They are usually black or grey, although sorrels, bays and roans are not uncommon.