A study at Washington State University shows common pesticides cause sublethal effects that could be contributing to colony collapse disorder. 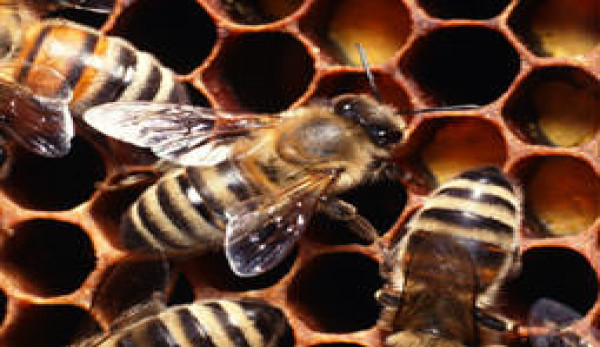 New research is the first to demonstrate the sublethal effects of pesticide-residue exposure on an insect largely responsible for a third of the human diet.

Judy Wu, a former entomology graduate student at Washington State University and current PhD student at the University of Minnesota, found that low levels ofĀ pesticides build up in Honey bee brood comb wax and cause serious consequences for developing worker bees and adult worker beesā lifespans. The brood comb is the breeding quarters of a hive and the place where food is stored.

Bees are economically critical because of their pollination services, so colony health is a high priority in entomological research. While honey is also valuable, it doesnāt compare to the contribution bees make as pollinators.

The pesticides involved in Wuās study include those used by beekeepers, growers and homeowners, including miticides, insecticides, fungicides and herbicides. The accumulation occurs because beekeepers reuse their combs to save on the expense of replacement.

Wu surmises that the pesticide residue contamination in the brood comb and its effects may be a potential contributing factor to losses associated with colony collapse disorder, a term coined in 2007 to describe the mysterious phenomenon that results in the disappearance of worker bees from hives. In recent years, the number of hives that beekeepers think should be healthy but are not has significantly increased.

Steve Sheppard, chair of the Department of Entomology at WSU and a widely respected authority on bees, says that CCD has a lot of possible causes. However, heās confident that while sublethal pesticide effects alone do not explain the disorder, Wuās research shows that low levels of pesticide accumulation cause abnormal Honey-bee development.

Some of the consequences to Honey bees that Wu found were delayed larval development and a shortened adult lifespan, which can indirectly result in premature shifts in hive roles and foraging activity.

If a beeās life span is shortened, it dramatically changes the dynamic of a hive. According to Sheppard, foragers are the bees that provide pollination and bring food back to a hive.

āA beeās life span as a forager is on average only the last eight days of its life,ā he says. āThis research shows that if raised with pesticide residues in the brood comb, an individualās foraging life span is shortened by four days, a 50-percent cut.ā

If thereās not a sufficient number of foragers in the colony, the colony makes up the deficit by using younger bees that are not physiologically ready. The result is a negative cascade effect on the entire hive all the way down to the larval bees because individual nurse bees must prematurely move toward foraging behavior and stop feeding larvae, Sheppard says.

In addition, according to Wuās study, longer development time for bees may provide a reproductive advantage for Varroa destructor mites.Ā Varroa mites are parasites that live in hives and prey on Honey bees. The extended bee developmental period enables these mites to produce more offspring that devastate hives.