The Phoenix is typically kept as an ornamental chicken breed. Hens are not reliable as layers, but they will become broody and make good mothers. 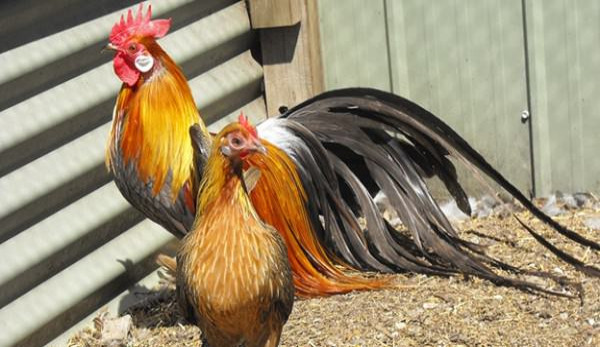 Use: The Phoenix is typically kept as an ornamental chicken breed. Hens are not reliable as layers, but they will become broody and make good mothers.

History: Hugo du Roi, the first president of the National German Poultry Association, created the Phoenix chicken breed by crossing the delicate Onagadori chicken with Leghorns and hardier game breeds. What resulted was a slightly more self-reliant chicken with an impressive tail length. The 1934 Worldâ€™s Fair is responsible for bringing the Onagadori chicken breed to America, where it was obtained by poultryman John Kriner, Sr. Kriner then passed the stock onto breeders who were able to use the Onagadoris to maintain the Phoenix breed. It was admitted into the American Poultry Associationâ€™s Standard of Perfection in 1965.

Conformation: Although itâ€™s sometimes referred to as an Onagadori, the Phoenix is distinctly different from its ancient Japanese ancestor when it comes to lifespan and tail length. The APA recognizes two color varieties: Silver and Golden. Both have standard plumage and a single, five-point red comb that is medium-sized in males and small in females. The Phoenixâ€™s small body sits atop light- to dark-leaden blue shanks. Wattles are red and earlobes are white. Standard Phoenix cocks weigh 5Â˝ pounds and hens weigh 4 pounds; bantam cocks weigh 26 ounces and bantam hens weigh 24 ounces.

Special Considerations/Notes: The Phoenix chicken breed requires a lot of attention and a patient handler. Itâ€™s necessary to house this breed in large dry coops with high perches so that its lengthy tail feathers have room to extend. It benefits from a high-protein diet to compensate for the extra plumage. The breed also does best when it has plenty of room to roam freely. While not known to be particularly friendly, the Phoenix chicken breed is docile, which helps breeders give it the necessary attention. The breed is listed in the Threatened category of the American Livestock Breeds Conservancyâ€™s Conservation Priority List.