Photo by Judith Hausman Raspberries are the “queen of berries” in my opinion, and I get mine from Amawalk Farm in New York. I’ve always loved the view from the berry patch at The Hickories. The gentle hills fold down from the ridge (just over the Connecticut line from me in Ridgefield) and over the […] 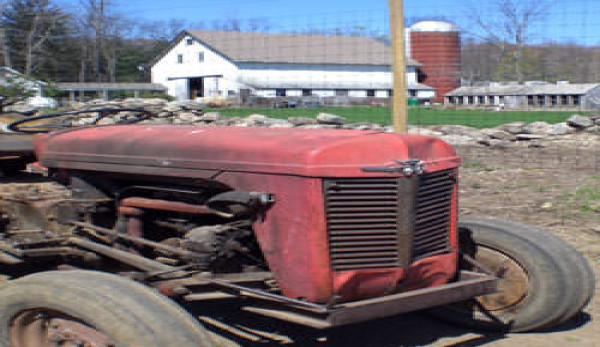 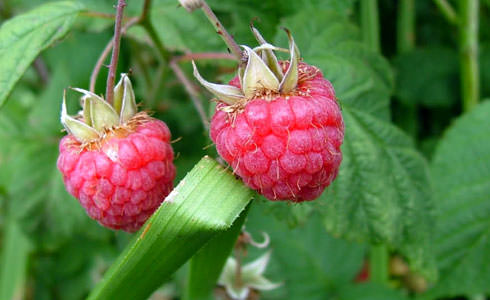 Raspberries are the “queen of berries” in my opinion, and I get mine from Amawalk Farm in New York.

I’ve always loved the view from the berry patch at The Hickories. The gentle hills fold down from the ridge (just over the Connecticut line from me in Ridgefield) and over the treetops. First, I go to pick deep scarlet strawberries for shortcake, later for easy-to-reach blueberries for pancakes. Big hickory trees line the stone walls, a peach orchard graces the next field over and there’s an apple and quince orchard too across the road. Dina lets me pick the knotty yellow quince late in the season to cook down to a deep-red jam, which is especially good served with cheese. 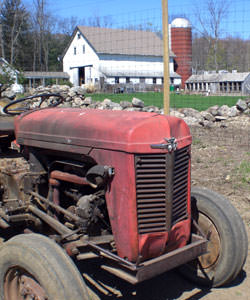 A view of The Hickories and grandma’s red tractor

Dina Brewster is the long-legged young farmer here. Her dad, uncle, grandma and grandpa were weekend farmers. After an Ivy League education, a stint in the Philippines with the Peace Corps and six years of teaching high school English in the Bronx, the tug of the farm on her was finally too strong to ignore. Because of her family, The Hickories has miraculously survived the suburbanization of the rest of the town. The Farmingville School up the road reminds you what the neighborhood used to be like, starting probably from when Governor Lounsbury built the white farmhouse on the property in 1764.

Dina also strives to rebuild a nearly-gone farming support infrastructure here. She uncovered a mechanic that could fix her grandmother’s 1959 Massey Ferguson tractor and the one butcher in the area that can kill her livestock. Her CSA has grown quickly, and she supports her local economy by adding local bread and cheese shares and running a pig, turkey and beef lottery in the fall. All this is in a community that also hosts an oil exploration R&D facility and a pharmaceutical company headquarters, along with many young family homes, strong schools and small businesses.

Other than the jam, I usually don’t cook the precious raspberries. They are better enjoyed un-messed-with. But I can recommend putting up raspberry cordial from 1 quart of berries, 2 cups of sugar and 1 pint of vodka. Just combine these in a clean jar and leave it all alone in the dark for two to four weeks; then strain out the spent berries. The alcohol steals and preserves The True Berry for you to enjoy long after the berry canes are picked over and emptied.

For early-bearing raspberries, the queen of berries in my opinion, I’ll head over to Amawalk Farm in Katonah, N.Y., in July. This is another suburban farm with a great story and located hard by the commuter train line. Marian has a PhD and Larry has an MPH and a day job. Who would have thought an Emmy-award winning TV producer from New York and a health care specialist from Maine would end up married and farming together? The Crosses decided to put the land that surrounds Marian’s former weekend retreat to work.

The antique 1825 farmhouse is tucked into a hollow surrounded by public lands and the sloped field that holds the wide raspberry patches looks out on forested hills. To prepare the meadow for raspberries, Larry cleared 150 trees, innumerable buckets of rocks and tangles of barberry, and then planted 1,500 plants in the spring of 2006 and 500 more in 2009. The former dairy barn is hung with 700 pounds of garlic, their second crop, and a vegetable prepping area is housed in the former calving barn. Larry puzzled it out for their squash, salad greens, hot peppers, flowers and other crops, which they sell to a few local stores and direct to U-pick customers.

Working romantically together in this second “career,” Larry and Marian have created a food-producing, organic oasis, filled with bees too busy to bother you, and a heavenly setting to pick the tender, tart berries. Kids from area schools and daycare visit regularly too, gardening carefully and learning where good nutrition comes from.

Of course, there are setbacks: Last year the tomato plague wiped out that sought-after crop for everyone around here and then after a gangbuster start, a raspberry fungus shut down Amawalk picking about five weeks early. I was lucky; I picked enough for a luxurious batch of jam that brings back the smell and the heat of the day that I picked the berries just perfectly.