Pigs need less predator protection than other livestock, but they need to avoid the sun. This shelter system provides important shade when the sun is high and hot. 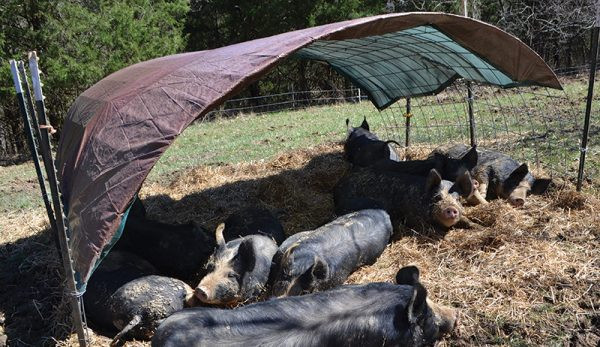 Pigs provide incredibly fun interaction on a daily basis. Theyâ€™re good for the soil when effectively managed. And, ultimately, they do a great job of filling a freezer with protein.

But another reason hogs have persisted as livestock animals since the earliest days of agriculture is that theyâ€™re pretty easy to raise. Sure, a pig-farming operation faces some distinct challengesâ€”and industrial farming techniques introduce their own problems, as evidenced by recent news that overbred sows are dying in record numbersâ€”but, on the whole, raising a drift of piglets to market weight isnâ€™t hard at all.

Take, for instance, the topic of shelters.

Raising egg-laying chickens requires a farmer to provide a coop thatâ€™s secure against the threat of predators. It also calls for someone to be home every night at nightfall to close and lock said coop.

(Meat birds, whose size and disposition preclude the most basic of evasive capabilities, require shelters that rival Fort Knox in security.)

While thereâ€™s some disagreement about whether sheep truly need to be under a roof, the prolific spread of coyotes makes a secure overnight shelter a good idea, regardless of your place on the map.

Pigs, however, donâ€™t need much protection. Iâ€™m sure more than a few predators would enjoy a meal of a baby piglet, but a good sow will quickly put to rest any notions of peacefully grabbing a quick bite.

(Of course, if you live in areas with a lot of mountain lions or grizzly bears, a cavalier attitude toward raising any livestock is a bad idea.)

Far greater is the challenge of keeping pigs in an area than keeping predators out.

That said, some basic shelter is good when raising pigs. Breeding pairs require a bit of protection against snow and arctic temperatures. (Itâ€™s not advised to raise feeder pigs during winter months, yet some doâ€”we have.)

Ultimately, though, the best argument for some basic pig shelters is to prevent sunburn.

Sunburn? Yep, pigs can get sunburned. Or, rather, I should say some pigs can be sunburnedâ€”pigs with light coats and nonpigmented skin (think big, pink Yorkshires) are especially prone to sunburn. But no pig, being descended from forest-dwelling wild hogs, is overly suited to spending the day under an open, sunny sky.

The results of sunburned skin can be pretty problematic, including pain, melanoma and, in sows, rejection of a boar or loss of pregnancy.

A wallow is an easy solution to sunburn as well as overheatingâ€”mud protects and cools the skin. But if you have a significant-size herd, you probably wonâ€™t have enough mud to go around.

Luckily, providing adequate shade is neither labor- nor cost-intensive for the small farmer.

On our farm, we converted an old cattle barn into a farrowing shed for when our sow gives birth. And weâ€™ve constructed a few permanent three-walled sheds, made from salvaged wood, in select pastures.

But when our pigs are in a far-flung pasture or the woods, our favorite shelter model is a quick-and-dirty tarp-topped hoop.

These pig hoop shelters are really easy to buildâ€”all you need is a few cattle panels, some t-posts, a few tarps (we pick them up on the cheap at places such as Big Lots and Harbor Freight) and cable ties.

Pound two t-posts into the ground spaced the height of one cattle panel, walk 4 or 5 feet, then position two more perpendicular to the first pair.

Repeat this for as many panels as youâ€™re using, then bend the panels so that they each create a hoop between the sets of t-posts. Use cable ties to secure the bottom of the panels to the t-posts, then work upward, pulling the panels to your t-posts with cable ties.

After youâ€™ve built your structure, throw tarps over your hoop and secure to the frame with cable ties threaded through grommets. One caveat hereâ€”pigs chew on tarps if they can reach them, so itâ€™s best to avoid bringing your “wall” all the way to the ground.

If the weather is turning cold and youâ€™re concerned about the chilly northern wind, you can stack some hay bales over the north-facing aperture. Yes, the pigs will eat it, but hay is good for them.

These makeshift pig shelters can be easily removed and reinstalled in the next pasture when itâ€™s time to rotate your pigs off of spent land, too.