Pigs Will Eat Nearly Anything, But Feed Them Scraps Carefully

Pigs eating kitchen scraps can help you with waste disposal and feed costs, but carefully consider what you give them. Here's why. 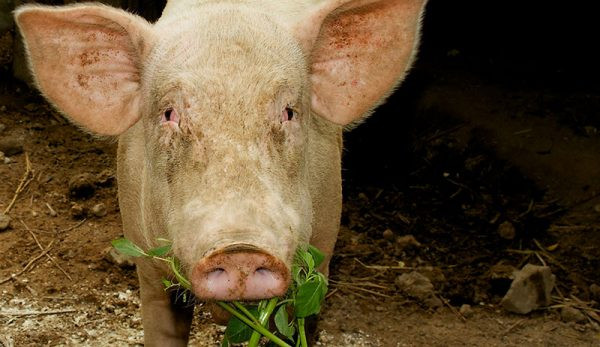 Pigs bring plenty of good things to a farm. One is meat, of course. Yet if pastured properly, pigs also contribute to soil health, and their engaging demeanor can be a source of joy for the attentive farmer.

Hogs have another huge benefit, and that’s waste disposal. True to their reputation, pigs will eat just about anything. Feeding them scraps and other kitchen waste reduces your garbage-bin load (minus compostables, of course) as well as your feed bill. But before you load up a bucket with all the spoiled contents of the refrigerator, here are some tips and even a handful of laws that you should follow.

A pig’s anatomy is eerily similar to our own—moreso than I prefer to dwell on, to be honest. Pigs have the same muscles as humans, and many of their organs are nearly identical to ours. In terms of digestion, this means they process feed in ways pretty similar to how we convert food to fuel.

What am I getting at? Basically, don’t feed your pigs what you wouldn’t eat yourself. This includes random yard waste containing unidentified weeds that might be toxic. It includes inedible items such as paper and wood. And don’t feed pigs anything moldy, slimy or otherwise suspect. We might be inclined to consider pigs steel-bellied garbage disposals, but if something might make you sick, it can take down a hog, too.

Know that certain laws are designed to shape your slop-feeding habits. Forty-eight states in the U.S. regulate the feeding of scraps to livestock, so where you live could determine what you can and can’t toss into the pigpen. Alabama, for example, prohibits feeding any food waste to swine, with a few exceptions. So get to know local laws before tossing your leftovers to the pigs. Your cooperative extension service can either provide answers or point you toward someone who will.

Aside from state laws, some statutes apply to pig keepers across whole nations. In Australia, for example, it’s illegal to feed pigs meat, meat byproducts or anything that has come into contact with meat. U.S. laws are a bit more permissive, but the Federal Swine Health Protection Act provides some guidelines for how and what pigs can receive from humans. It generally prescribes that animal products need to be heated to boiling and held there for 30 minutes by someone holding a garbage-treatment permit. Exemptions include bakery items, candy, eggs, domestic dairy products and fish caught in certain geographical areas. The law doesn’t cover food products grown on farm, including meat products, so you can theoretically feed your pigs leftover chicken if you raised the birds on your property, though many old-timers warn against feeding any meat to pigs as it can give them “a taste for flesh” (including yours).

Even if it’s legal in your state to feed pork products to pigs, I suggest you carefully contemplate it before offering the meat of one animal to members of the same species. Though it’s somewhat standard practice among some hog farmers to feed dead piglets to adult pigs—it’s called “feedback” and is believed to provide protection against rotavirus and E. coli—consider some issues before you drop pork chops into the feeding tray.

First, whether it’s a sow eating her own piglets or a pig gobbling up bacon, it’s important to recognize what this is: cannibalism. While we can (and should) recoil at the societal implications of the term, there are other problems with the practice. Kuru is a terrible human disease tied directly to cannibalism amongst tribes in Papua New Guinea. Feeding cow remains back to cattle, meanwhile, spread bovine spongiform encephalitis, commonly called mad cow disease. Both of these diseases are zoonotic, meaning they can be transmitted between different species, including humans. (More than 150 people have died from mad cow disease to date.) There might not be a swine-bred variant of these diseases now, but that doesn’t mean it’s impossible.

I, personally, don’t take the risk.