Pigs & Their Wild Cousins: How Livestock Has Adapted for Winter

In this second of four parts, we learn about a bison-size, prehistoric "terrible pig" and how observing feral pigs can inform care of domesticated ones. 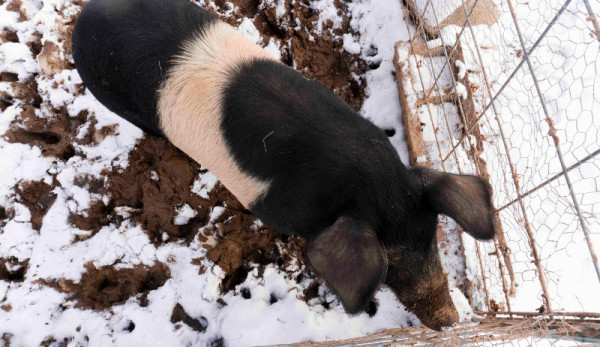 Imagine your favorite pig the size of a full-grown bison. Six feet tall at the shoulder, 11 feet long and tusked. That would be Dinohyus hollandi, or â€śterrible pig,” the oldest known pig-like animal that roamed North America around 40 million years ago. Itâ€™s quite a leap from this enormous animal to the farmed pigs that appear to have been domesticated by more than seven civilizations about 10,000 years ago around the world. North America was not one of those areas; no wild pigs are native here. Our domestic pigs descended from the Suidae, a related but separate family from the giant, terrible pigs that went extinct.

On our continent, the mixture of wild and domesticated pigs and their origins is muddled. Immigrants brought East Asian breeds that mixed with Spanish, and British with Scandinavian, just to name a few. Each successive generation became more resilient and adapted to their surroundings in the New World, and the mixtures evolved into landraces well suited to their parts of the country.

Peccaries and javelinas, some of which are native to North America, are easily mistaken for pigs but are in a different family, distantly related to the similar-looking domesticated or feral pigs. Feral pigs are imported domestic animals that were turned loose or escaped and exist in the wild, foraging wherever they please.

Observing the behavior of feral pigs in winter conditions provides clues to proper care for domesticated pigs. In the autumn and winter, mast production (the dropping of nuts and seeds from trees) is natureâ€™s buffet. It provides feral pigs a supply of protein-rich nutrition and supplies much-needed calories for winter rooting and an extra layer of fat. The pigs migrate short distances to make the most of forests’ seasonal offerings. Year-round, feral pigs stay fairly close to water sources, but they can make themselves at home in a wide variety of environments, from sea level to up to 13,000 feet, and from prairies to swamps. The only places they tend to avoid are higher altitudes with heavy snowfall and open farmland without shade. The roaming nature of feral pigs is a good indication that confinement is not a healthy lifestyle for the domestic pig, nor should grains comprise the majority of the diet for these active omnivores.

Pigs might have a reputation for being lazy, but they merely reserve their energy for the hard work of earth-moving by wallowing, nesting and rooting. Lacking sweat glands, pigs make wallows to escape summer heat and continue to use them year-round, sometimes breaking ice to use them in the winter. Wallows also provide a territorial function in the pig social structure, especially during breeding times. It is possible that pig biology evolved with minimal sweat glands as a result of the availability of mud baths and their natural evaporative cooling. Wallowing also does the practical job of reducing parasites, much like a dust-bath for poultry. It also just feels good for the pig and is a critical part of raising domestic pigs in a holistic manner.

Rooting is another behavior that comes with the territory of keeping pigs. Traditionally, it was as normal to keep a pig or two as it was to keep chickens in backyards, and equally common in the big cities as rural homesteads. The chickens and pigs had jobs to do, and were put to work in clearing fields of insects and plant residue. The similarity doesnâ€™t end there, as sows will build nests before giving birth. In feral pigs, the main function of the sow-made structure is to protect her newborn young from inclement weather.

The climate of the countries of origin and the geographic locations where different types of pigs developed shaped the qualities that distinguish the breeds. Rare heritage breeds such as the Choctaw, the Guinea, the Red Wattle, and the Gloucestershire Old Spots vary in their cold-hardiness. In theory, all domestic pigs can fare well in all seasons if provided protection from cold wind in the winter, ample shade in the summer, and water and wallowing space all year round. To translate the ancestral history into practical help for deciding what breed to raise, read this Hobby Farms story comparing lard pigs with those raised for meat as well as the Livestock Conservancyâ€™s Quick Reference Guide to Heritage Pigs.