How to Tell Whether Your Pig Is at Top Hog Weight

If you're new to raising pigs, it's not always obvious when they're at slaughter weight. This tape-measure trick can give you an idea of a pig's weight. 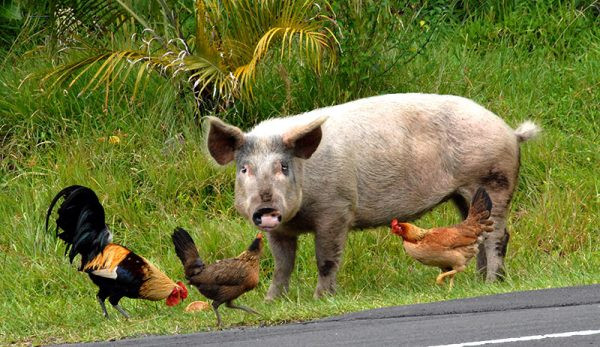 Some folks would have you think that raising hogs is easy. And the truth is, it isn‚Äôt too terribly difficult once you‚Äôve been at it for a while.

But when you first bring porcine livestock onto the farm, whether it‚Äôs a pair of feeder hogs or a litter of little weaners, you‚Äôll face more than a few questions.

In information age, sometimes asking a question leads to a tsunami of answers (many of which might contradict each other). That can be enough to put you off the idea of getting pigs. At the very least, it can give you pause.

So to that end, let me say that, yes, new pig owners have to figure a lot out, much of it on the fly. Sometimes they get it wrong, and sometimes the right way presents itself with unimaginable ease.

It can be frustrating as much as it is hilarious (pigs are the farmstead‚Äôs court jesters). But the adventure of trying something as crazy as raising pigs to market weight is, in my opinion, worth pursuing.

Let’s start with “market weight.” What is that exactly? (Here‚Äôs where I add one more answer to the bottomless pool of digital information.)

A pig reaches ideal market weight when its metabolism changes and no longer puts on meat muscle at the rapid rate seen during the growing months.¬†

See, a pig converts feed to meat at a pretty consistent rate until hitting a point where rations are no longer efficiently converted to muscle. The return on the investment of bags of feed drops dramatically when the feed conversion ratio bottoms out.

For large-scale farmers, this ratio is serious business. But even small-scale and hobby farmers shouldn‚Äôt grow a pig too far past this point. There‚Äôs no sense in unnecessarily spending money at the feed store when you‚Äôve done the growing and are ready to visit the processor.

When we started raising Berkshires, my wife and I didn‚Äôt have the eye we eventually developed for knowing which pigs were ready when (at which point, we took great pride in getting live weights back from the processor and seeing how consistently we got it right).

We asked our county extension agent for advice. He, a man with a thorough understanding of cows but limited experience with pigs, offered to bring a cattle scale out to us.

In the end, we just set a date with the processor when our pair of pigs would be 6 months old and hoped for the best. We delivered some underweight pigs that day, the result of a few different reasons (our feed wasn‚Äôt formulated right, winter pigs grow slower, and so on).

But even those smaller pigs filled the freezer with outstanding, home-raised pork protein.

Eventually, we found a mentor who told us the main answer we needed to know: That ‚Äútop hog‚ÄĚ weight is anywhere from 250-300 pounds, depending on the breed. (‚ÄúI think 270 is the magic number,‚ÄĚ he said.)

He told us it often takes seven months to reach top hog, sometimes more for heritage breeds. And he shared the following method for predicting a pig‚Äôs weight, which works pretty well when you‚Äôre still developing “the eye.”

You need a fabric measuring tape‚ÄĒyou can buy something called ‚Äúhog weight tape‚ÄĚ at the farm supply store, but the former works just as well. You measure your pig in inches, and it goes without saying that you‚Äôll be very close to your pig, so I hope you‚Äôve put in the time to get your pigs accustomed to your touch (but still be careful‚ÄĒpigs like to bite).


The number you have at the end of all this should be close to your pig‚Äôs weight in pounds.

Is it exact? Probably not, but if you‚Äôre around 200 pounds and aiming for 270, you know you have a few more weeks of feeding ahead of you. And if your number is top hog‚ÄĒwell, it‚Äôs time to call the processor.