A medium-class, sex-linked breed, the Pilgrim has distinct coloration and produces fine meat. 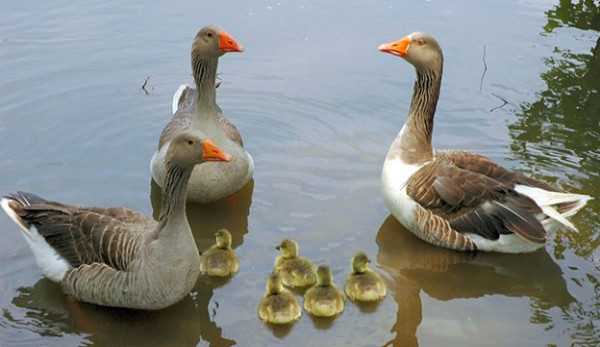 Use: The Pilgrim is in the Medium Class of geese. Though not as large as geese from the Heavy Class, they still produce an excellent roasting carcass and are good mothers. Pilgrims have the distinction of being a sex-linked breed, meaning their sex can be determined by sight using the color of the down or feathers. This is an important economic quality.

History: Contrary to legend, Pilgrim geese were not brought to the United States by early settlers. Oscar Grow, noted waterfowl expert from the early 1900â€™s developed this breed from one or more of the auto-sexing European breeds such as the West of England goose or the French Normandy goose. Their name was supposedly assigned by Mrs. Grow to commemorate her familyâ€™s personal pilgrimage to Missouri during the Great Depression. They were admitted to the American Poultry Association Standard of Perfection in 1939.

Conformation: Pilgrim geese are medium in size; they have no knobs nor a dewlap. They are similar in shape to an Embden, but smaller. The males should be nearly all white with bluish gray eyes and traces of gray in the plumage-typically on the back near the tail and in the wings. The female is a combination of varying shades of gray with white around the bill and eyes, the white patches increasing with age. Color of eyes in females should be hazel brown. Bill, shanks and feet of both sexes should be orange. Newly hatched male goslings are yellowish or silver with light colored bills. Newly hatched females are greenish-gray with darker bills. Standard weights: Old Gander: 14 lbs., Young Gander: 12 lbs., Old Goose: 13 lbs., Young Goose: 10 lbs.

Special Considerations/Notes: Be aware of the distinct coloration of the Pilgrim. Crossbred geese can be passed off as Pilgrims, but will not pass the auto-sexing characteristic of the breed to their offspring.