Rely on your thermometer, not your eye, says the USDA in its updated recommendation for proper pork doneness. 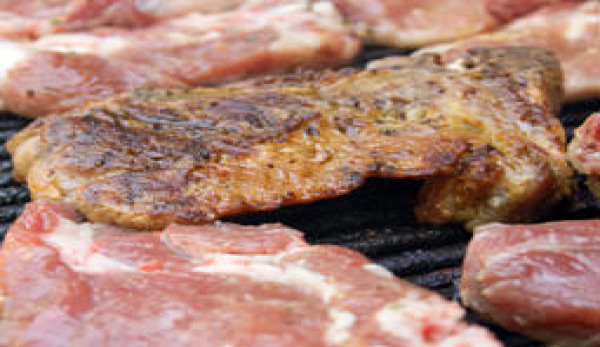 As you fire up theÂ grill this Memorial Day weekend, perhaps for the first cookout of the year, make sure your meat hits the mark for proper doneness. If pork is on the menu, donâ€™t perspire over a little pinkâ€”according to a new USDA recommendation, some pink can be OK.

The USDA recently updated its guidelines for safely cooking pork, steaks, roasts and chops. The whole cuts of meat should be cooked to 145 degrees F, as measured with a food thermometer at the thickest part of the meat, then allowed to rest for three minutes before digging in. The most dramatic change seen as a result of the updated recommendation applies to pork, which the USDA originally recommended be cooked to 160 degrees F without the three-minute rest time.

Pretty (Pork) in Pink
Long-held perceptions about cooking pork are that pink means the meat needs a little more grill time. However, the appearance of meat is not a reliable indicator of food safety or risk, according to the USDA.

The pink color in pork can be due to the cooking method, added ingredients or other factors, according to the USDA. For example, cured pork, such as cured ham and cured pork chops, will remain pink after cooking. Only by using a food thermometer can consumers determine if meat has reached a sufficient temperature to destroy pathogens of public health concern.

3-Minute Rule
Cooking pork to 145 degrees F with a three-minute rest period is just as safe as cooking it to the previously recommended 160 degrees F, according to the USDAâ€™s Food Safety and Inspection Service. During the three minutes after meat is removed from the heat sources, its temperature remains constant or continues to rise, which destroys pathogens.