Sweetie, our new pygmy goat who has pinkeye, is doing better. She can see out of one eye! 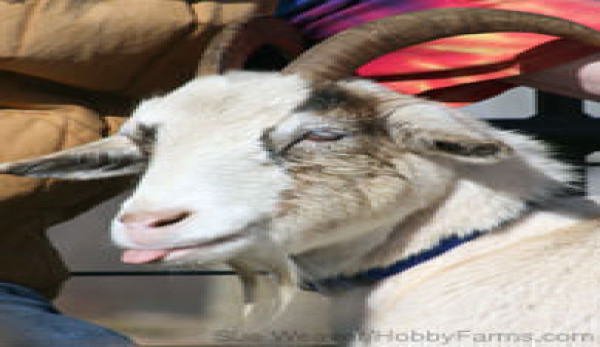 Sweetie, our new pygmy goat who has pinkeye, is doing better. She can see out of one eye!

At first, when Sweetie was totally blind, she had to stay in a stall so she could find feed and water. Now she gets to go outdoors with our other miniature goats, Spike and Modo. (Mom changed Moragâ€™s name to Modo because we told her Morag is a dumb name for a boy).

Mom and Dad put stuff in Sweetieâ€™s eyes two times a day. At first the vet said three or four times was better. Sweetie was blind and she didnâ€™t know anyone here, so sometimes she cried when Dad caught her. That was sad. Then Dad started feeding her animal crackers, and she quickly decided he is OK. Now she calls to Mom and Dad when she sees them coming. Yay, Sweetie!

Pinkeye is also called conjunctivitis. You should know about it if you keep livestock on your farm. Horses,Â dogs andÂ cats can get it, too. Different microorganisms cause infectious pinkeye in different species, though all species get simple pinkeye from dust and injuries. Symptoms, however, are much the same.

The first thing youâ€™ll notice in an animal infected with pinkeye is excess blinking, then the animalâ€™s infected eye or eyes begin to tear so the area around its eyes get wet. Eye membranes become red and inflamed. Light hurts the animalâ€™s eyes, so it tries to stay in the shade or hide its face in a dark corner. Then a cloudy, opaque film gradually covers the eye. Sometimes the eyes ulcerateâ€”get open sources. That happened with Sweetieâ€™s eyes. Then the animal is blind, and if she canâ€™t find water and food, she gets skinny. If sheâ€™s nursing she canâ€™t make enough milk to feed her babies.

In some cases, infectious pinkeye heals without treatment in 10 to 14 days. But severe cases sometimes take weeks to heal, and if untreated, the eyeball can rupture and the animal stays blind forever. So itâ€™s best to ask your veterinarian to take scrapings of or swab an infected eye and have tests made to determine whatâ€™s afoot. In the meantime, affected animals should be quarantined in dark, contained quarters, where they can find food and water and bright light doesnâ€™t hurt their eyes.

Cattle get infectious bovine keratoconjunctivitis from bacteria called Moraxella bovis. According to a 1993 study, American cattle farmers lose about $150 million a year due to pinkeye. It’s spread mostly by flies. Other farm animals canâ€™t catch pinkeye from cattle.

We goats and sheep get pinkeye from several different microorganisms but usually from Chlamydia psittaci ovis and Mycoplasma conjunctivae. Flies spread it from animal to animal and back again. We can also get it by rubbing our faces on a sick animal or something that has infectious eye guck on it.

If your animal has pinkeye, your vet will want you to put medicine in its eyes. Mom and Dad are using Terramycin ointment for Sweetie, but other treatments include sprays or drops. Hereâ€™s a guide toÂ medicating horsesâ€™ eyes that applies to doctoring other species, too.

Itâ€™s scary and discouraging when your animal friend is blind from pinkeye, but donâ€™t give up! If your veterinarian diagnoses the problem right away and you treating its eyes according to directions, like Sweetie, in time it should be able to see again, too.