4 Reasons the Pitchfork Is a Classic Farm Tool

The pitchfork might seem like a farming stereotype, but only because it has earned its place as a hand tool that every farmer should own. Here are a few common uses for pitchforks. 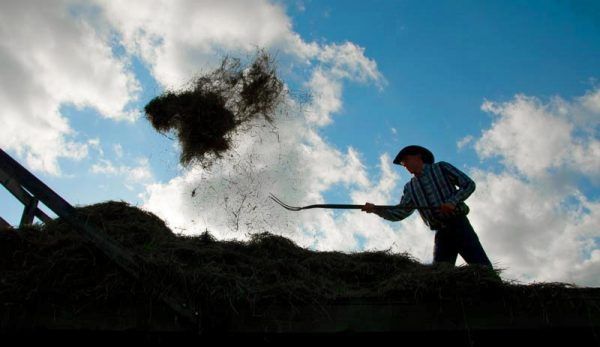 Ask most anyone to name the most stereotypical hand tool used by farmers, and chances are youâ€™ll hear about the pitchfork. Along with tractors and silos, the pitchforkâ€”a long-handled tool with a varying number of curved tines at the endâ€”is among the most instantly recognizable elements of farming. (Think of the classic Grant Wood painting American Gothic, featuring a grim-faced farmer holding a three-pronged pitchfork.)

The pitchfork might be a farming stereotype, but thatâ€™s because it has earned its place as a trusted tool that every farmer should own. Let me assure you, I have several and use them frequently for a wide variety of tasks, because theyâ€™re versatile and easy to use. Letâ€™s look at some of the ways that pitchforks can be put to use.

This might be the most classic use for pitchforks. Thereâ€™s no easier way that I can think of to quickly move large amounts of loose hay, straw or similar materialsâ€”you simply scoop up a load with the tines (and despite their small size, the tines can carry surprisingly large amounts) and place the load wherever you want, whether itâ€™s another haystack or pile, a cart, a wagon or some other location.

Part of what makes the pitchfork so ideal for moving loose hay is its limited number of tinesâ€”many pitchforks have just two or three. Because the tines are widely spaced, itâ€™s easy to slip the pitchfork right into the heart of a haystack. Itâ€™s equally easy to remove it without a bunch of hay getting stuck in the tines, which can happen with tools that have more numerous and tightly-spaced tines, and which reduces the effectiveness of the tool.

Pitchforks are also very good at removing sod from the ground, as you might do if preparing a garden or constructing a brick walkway. As with moving hay, the widely spaced nature of the tines makes it easy to insert the pitchfork into the soil, after which you can push down on the handle to lift up the ground and break the connection of the grass and sod to the soil underneath. I find it faster and cleaner than using, say, a digging shovel, and itâ€™s easier to achieve the flat, smooth results ideal for garden beds.

Pitchforks are also commonly used for handling manure on farms with livestockâ€”coupled with a wheelbarrow or a small cart or trailer, itâ€™s a great way to handle this necessary (though by no means glamorous) task. However, in these instances, youâ€™ll probably want a special manure pitchfork with more tines spaced closer together; some look like regular pitchforks but with five or six tines, while othersâ€”designed specifically for cleaning livestock stallsâ€”can have around 15 tines with very small gaps between them. This can be a superior design for mucking stalls, because the widely spaced tines of two- or three-prong pitchforks can allow too much manure to slip away.

Iâ€™ve found that pitchforks are also effective at cleaning up leavesâ€”after using a rake or leaf blower to gather them into piles, you can use a pitchfork to lift them into a trailer or wagon for disposal. However, as is the case with handling manure, pitchforks with a higher number of tines can be better-suited to this task, making it less likely that leaves will slip in between the tines and fall back to the ground.

Do you have a pitchfork on your farm? Let us know how you like to use it!