Before digging into your pockets to purchase farm fences, create a fencing plan that's both legal and effective. 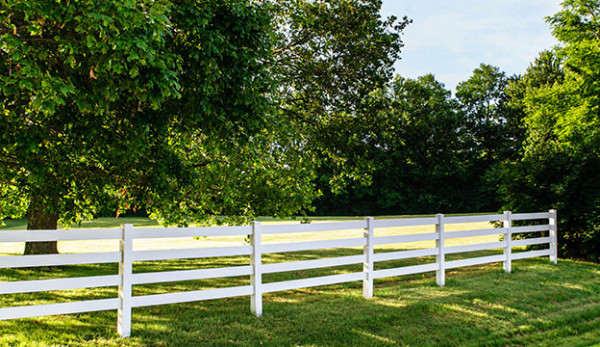 Farm fencing is a big expense, both in terms of time and money, but it’s one of the most important purchases a farmer will make, and it‚Äôs best made early in the process of setting up your farm. After all, you‚Äôve achieved your goal of moving to the country, but without the right type of fencing for your farm, you could look out the window and see your flock of sheep and their guardian llama heading down the road, your goats enjoying the newly planted fruit trees, or your pigs digging in the neighbor‚Äôs garden. Oops!

In the distant past, natural materials were the only available supplies for farm fencing. Then¬†in the late 1800s, barbed wire was invented, offering the intrepid farm fence builder an effective means of creating long-standing barriers. Today, fencing technology has grown more humane and includes a much wider range of materials, from the old standbys, such as wood, to new, high-tech materials,¬†such as¬†high-tensile polymer rail and electro-plastic twine.

Stan Potratz, owner of Premier Fence Systems, has been instrumental in introducing many modern farm-fencing products to North America.

“While attending college in England in the late 1960s, I found a used copy of Andre Voisin‚Äôs book, Grass Productivity, which outlined the principals of rotational, or intensive, grazing,‚ÄĚ he explains. “The college had an operating farm, and because of my background, I got recruited to work on it, and I began experimenting with the ideas. New materials were showing up in Britain at the time, like low-impedance energizers, step-in posts, electro-plastic wire and high-tensile wire.‚ÄĚ

When Stan returned to the family farm in the late 1970s, he wanted to run sheep. He went to local farm-supply stores but couldn‚Äôt find any of the materials he‚Äôd been using in England, so he began importing them for his own use.

“My neighbors looked kind of askance,” he says.¬†“At the time in Iowa, you raised corn and beans, maybe some hogs. But the economy of the late 1970s was good for sheep, and I was running 700 ewes using these products I‚Äôd imported. Other sheep producers became really interested in what I was doing‚ÄĒas did staff from some of the agricultural colleges.‚ÄĚ

Stan didn‚Äôt intend to start a fencing supply business, but by the early 1980s, he had a viable sideline business.

Today his accidental business has grown because, as he explains, “There has been a real increase in the availability and quality of these newer fence products in the last couple of decades, both with the imported products and the domestic ones.‚ÄĚ

Every state has laws that regulate ownership and control of livestock. In some areas where “free-range‚ÄĚ laws are still enforced, a landowner must fence out the neighbor‚Äôs animals, but in most places, it is the livestock owner‚Äôs responsibility to control his or her animals with adequate fencing.

Fence laws typically define who is responsible for constructing and maintaining a fence, who has liability when animals get out and cause damage (including when they get on the road and cause an accident), and a description of what constitutes a “legal fence.‚ÄĚ

Some local governments also have fence laws, which often prohibit the use of certain types of fence‚ÄĒfor example, barbed wire or electric fence are often illegal in towns and subdivisions. Your County Extension Agent or local animal control officer should be able to provide information on the fence law in your area.

Your Existing Fence: Fix or Replace?

If you‚Äôve inherited an old fence, you‚Äôre faced with the dilemma of fixing it up or replacing it. Some old fences still have lots of life left in them, and with just a minor amount of repairs can provide years of service. But many are more trouble than they‚Äôre worth.

To¬†decide which category your fence falls into, take a stroll. Walk the entire fence slowly and look at its condition. Are posts rotting and falling over? Push them with all your strength; do they move easily? Are wires rusted to the point that it takes little pressure to break them? If you answer yes to these questions, scrap the existing fence. On the other hand, if the posts are still stout and firm and wires aren‚Äôt severely rusted, or if there are just one or two spots that are failing, you might be able to just tighten up an existing fence.

Before you start purchasing materials, it helps to map out your fencing project. Draw your farm on grid paper showing roads, buildings, paddocks and significant natural features, such as heavy woods,¬†ponds and¬†rock outcroppings.

Having multiple paddocks (pasture subdivisions)¬†to rotate livestock through improves grass management, feed quality and herd health. The more paddocks the better, but ultimately, aim for at least eight. Paddocks can be easily subdivided using temporary electric fencing to start out, though developing permanent paddocks reduces the workload. When designing paddocks, keep in mind that a square requires less fencing material per square foot than an oblong or triangular layout, though at times, these shapes work best to meet other needs, such as access to water.

Gates are best constructed at the onset, and extra gates provide greater flexibility, but they also cost extra money. Plan gate layout for ease of movement, both for animals and equipment that might need to pass through. Man gates should be 4 feet wide, and¬†equipment gates should be¬†12 to 16 feet wide. Show property lines, paddock lines and gates on your map. Take measurements for the lines, and mark them accordingly.

Now with your design mapped out, begin pricing materials and comparing products or contractors.

While the type of post you choose depends on the type of fencing you ultimately select, there are some general guidelines:

Carol Ekarius is a Colorado-based author, freelance writer and consultant to the nonprofit and governmental sectors. Her main areas of interest include agriculture, environment and natural resources, food, and lifestyle. Contact her at http://carolekarius.com.