The best plant stock will fail in the wrong climate, so get to know hardiness zones and your specific micro-climates to achieve growing success on your property. 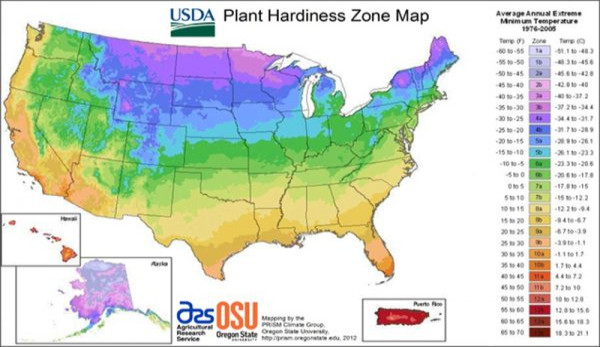 The first official hardiness zone map was released by the United States Department of Agriculture (USDA) in 1960. It has been adapted to varying degrees by other countries, including Canada and Mexico.

Hardiness zones vary from 0 to 13. The range tells us what the average winter extreme low is. This relates to plant survival and the potential edible diversity for a property or farm.

The importance of hardiness zones increases as you move up. As you go farther north in latitude or mount higher in elevation, the climates grow colder on average and will have a lower average winter extreme.

When we talk about perennial plants, we talk about those that survive the winterâ€”plants that keep growing and adding layers of new branches each year. Some may die back partially or go dormant into the roots. But they return each year from the same tissue material (not from new seed).

Many important perennials exist for home growers, homesteads and farms. These include the notorious apple, well-loved strawberry, famed grape, fragrant lavender, early rhubarb and many more.

A big part of their survival and continued growth is that the variety is grown in a climate conducive to the plantâ€™s health, vigor and ultimately survival.

Other factors that will influence perennial planting success include:

Read more: As our climate changes, so will the hardiness zones. Here’s what you need to know.

However, these all pale in comparison to whether or not a plant can survive the winter. It doesnâ€™t matter how good the soil is, or the health of the initial transplant, if the variety just cannot handle your -20 degree F winter.

Yes, healthy plants are better prepared to handle colder temperatures. But, regardless, your winter average wind temperature is the ultimate deal-breaker. It will determine what you can (and canâ€™t) grow outside in a garden, orchard or edible ecosystem.

Hardiness zones in North America range from the very coldest zone 0a in the Arctic region of Canada to Zone 13b in Puerto Rico. (Hardiness zones go from 0 to 13, but they are also sub-grouped by a and b, with a being the colder category.)

It is also important to see how the gradient of hardiness zones changes not just from south to north, but also in mountainous regions.

That’s because cities like Santa Fe are over 7,000 feet above sea level.

Within a region, you can usually define the hardiness zone as 4a or maybe 4b. Part of what makes the difference on your landscape scale is the micro-climate effect.

Micro-climates occur at different scales. Certainly, larger geographic features such as lakes, oceans and rivers (as well as mountains, valleys and flood plains) will influence your regional hardiness zone.

Indeed, this is why you find similar hardiness zones in Boston Massachusetts and Rochester New York (with lows around -5 to -10 F. It is considerably colder in Albany and central New York state (-10 to -20), even though they are all on a similar line of latitude.

This is why all areas north, south, east and west of the Great Lakes have milder climates than anywhere else around them. Drive away from the Great Lakes in any directionâ€”it gets colder and the hardiness zones drop.

Michigan, squeezed between the Great Lakes, is the last state heading West with any significant landscape in zones 6a and 6b. Then you enter the great expanse of colder zones in Wisconsin, Minnesota, Wyoming and Idaho. Some respite finally shows up around Boise, Idaho, with a return to more moderate hardiness zones and easier winter survival for many perennials.

Read more: What’s a Permabed? And what does it have to do with micro-climates?

Yet, you can better understand micro-climates by looking at your local community and property.

Consider the differences in climate on a sunny side of a ridge versus the sheltered side of a tree windbreak. There could be the difference of a half a zone between these two examples.

On my own farm,a glacial moraine ridge runs down the center. On the sunny south side of the ridge, the land absorbs warmth during the day.

But what is more, this same sunny side of the ridge is actually a gentle plateau. It eventually and quite quickly drops down to the river in my neighborâ€™s property. This means that not only is the sunny southern side of my ridge warmer from its exposure to the south and its protection from the prevailing winds, but it also has great cold air drainage.

Cold air tends to settle in low-lying areas. And since my warmer sunny plateau eventually drops down to a river, the cold air that might cause a frost on early spring blossoms or kill off my fall tomatoes is more likely to settle lower down by the river and leave my trees and vegetables safe.

On this warmer side of my ridge, in the shelter of a building I have there, I can successfully grow the most tender of perennials, which otherwise would die on my farm. For instance, pawpaw trees (considered zone 5) tree would surely die on the other side of the ridge. But I can keep them growing on the sheltered and warm side.

Trying to find a new agricultural niche in your region? Building food security as homesteader? Collecting different edible plants for the garden?

Regardless, you must understand your climate, your hardiness zone and the opportunities for micro-climates!