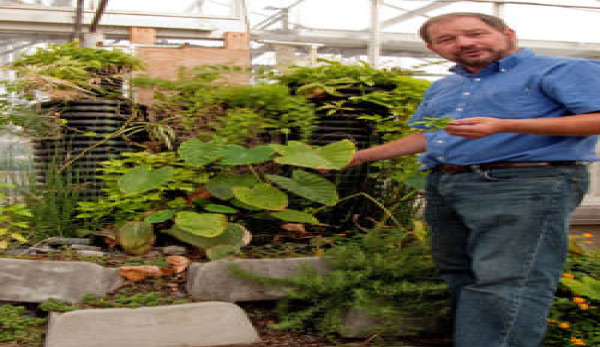 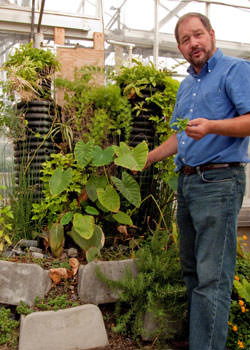 Plant roots enmeshed in layers of discarded materials inside upright pipes can purify dirty water from a washing machine, making it fit for growing vegetables and flushing toilets, according to Penn State University horticulturists.

“Our global fresh water supplies are fast depleting,” says Robert Cameron, a doctoral student in horticulture. “So it is critical that we begin to look at alternatives on how we can take wastewater and turn it into a resource.”

Cameron and Robert D. Berghage, associate professor of horticulture, use discarded materials and a combination of plant and bacterial communities to treat water from a washing machine and other wastewater.

According to Cameron, this design is superior to previous living water-treatment systems in that it requires much less space and is much more efficient at removing water contaminants.

“We have shown that with this system we can take wastewater from a washing machine and remove more than 90 percent of the pollutants within three days,” says Cameron. “The treated water had very low levels of suspended solids and no detectable levels of E. coli.”

The water-treatment system consists of two 7-foot-long plastic corrugated pipes 1 foot in diameter. The researchers placed these pipes upright 3 feet apart in a basin containing a foot of potting soil and crushed limestone.

“We planted the 3-feet-by-5-feet basin at the foot of the pipes with papyrus and horsetail reed,” Cameron says. “Just like in a wetland, the roots of these plants and associated bacteria clean the water as it flows under the basin surface and through the two columns.”

Researchers planted vegetables and ornamental plantsâ€”tomatoes, peppers,Â rosemary,Â basil and orchidsâ€”in holes drilled along the length of the pipes. They then pumped about 45 gallons of wastewater from a washing machine to the top of the two pipes.

“As the dirty water trickles down the pipes, the tight mesh created by the soil, gravel and roots filters out pollutants,” explains Cameron. “Additionally, bacterial colonies among the roots eat away the dissolved organic matter while layers of iron scraps or clay can be added to trap phosphorous.”

By periodically replacing the plants, pollutants not metabolized but trapped, can be removed from the water-treatment system, he adds.

The water-treatment system also is effective in filtering out boron. While boron is a necessaryÂ micronutrient for plants, itâ€™s toxic at high levels and can accumulate in the ground.

“Our gray water sample had boron levels of about 702 parts per million,” Cameron says. “But after about three days of treatment, water collected from the foot of the pipes had only about 58 parts per millionâ€”a reduction of about 92 percent. Dozens of other pollutants were similarly reduced in two to three days.”

Cameron indicates that the next phase of research will focus on the beneficial reuses of the treated wastewater, such as reducing a building’s need for air conditioning.