With the first day of spring behind us, it's time to start thinking about what spring crops we can get in the garden for an early harvest. 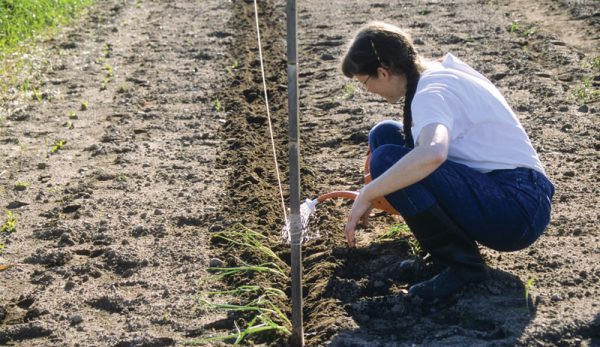 It may be the very early days of spring right at this moment, but time flies. Before you know it, your garden will be ready for action. But one challenge of planing crops in early spring is the lingering chilly temperatures. Some days it might be brilliantly warm and awesome, but the next day might be cool and cloudy. Plus, early season frosts may threaten to loiter long after the snow has melted.¬†

There‚Äôs no doubt that you‚Äôll need to hold off planting cold-sensitive crops until the danger of frost has passed (hello, indoor tomato trays!), but many vegetables can handle the weather of early spring. On the seed packets of some of these varieties, you might have seen a phrase such as ‚Äúplant as soon as the ground can be worked‚ÄĚ or something similar, to indicate that these crops can be sown very early in the year.¬†

Let‚Äôs take a closer look at that phrase, and explore some of the early-spring crops you can look forward to getting in the ground right away this year. This is gardening for the impatient!¬†

So what does ‚Äúas soon as the ground can be worked‚ÄĚ really mean? Partly, it‚Äôs a temperature indication. In very cold climates, garden soil may actually freeze solid during much of the winter (sometimes down a few inches), so obviously folks in those regions must wait until the ground thaws before considering spring planting. (Though I did once successfully plant some late-autumn garlic well into December by literally breaking through a 1/2-inch surface layer of semi-frozen soil to reach the fluffy soil below.)¬†

But there‚Äôs a lot more to the phrase than just the absence of frost. Early spring often means overly wet soil‚ÄĒthe type that can be worked into a ball with your hands. This doesn‚Äôt count as ground that can be worked. Instead, your best bet for success will come once the soil has dried sufficiently to be fluffy and crumbly.

Those two factors‚ÄĒwarm and dry soil‚ÄĒare the basics that combine to form soil that is ready for planting. But if you enjoy bringing a scientific attitude to your gardening (maybe you routinely monitor your garden‚Äôs soil pH), a simple soil thermometer can help you determine if the soil temperature is within the range that your particular seed varieties prefer.¬†

Peas are wonderfully cold-hardy and can be planted from seeds as long as the soil temperature is above about 40 degrees F and below 70 degrees, basically any time after the ground has thawed. They thrive in cool temperatures and make an excellent early spring crop. Plant them as soon as you can!

If you‚Äôd like to experiment, try sowing pea seeds in the fall and allowing them overwinter in the soil. If you time this correctly, the seeds should lay dormant in the soil (it‚Äôs OK if they freeze) until warmer weather arrives again. This can give your pea plants a head start in the spring, and it‚Äôs rather nice to take a walk in the early spring and see a couple of pea sprouts popping out of the ground‚ÄĒalmost as if you didn‚Äôt do any work for your crops!

The downside is that some of the seeds may rot if the soil is damp for a long time, and small critters (hello, mice and voles) will have more time to seize the seeds before they germinate. ¬†

In temperate regions, you may even be able to plant peas in the fall and allow them to germinate and begin developing a root system. As long as the winter isn‚Äôt terribly severe, many of the young seedlings may survive the winter and gain a head start for the next year. Obviously, cold frames and other frost prevention methods will help greatly.

This technique is more common in the U.K. but is definitely possible in certain areas of the U.S.

Read more: Trellis your plants to grow more in your garden space.

Nothing beats fresh, homegrown lettuce for salads and sandwiches, and you won‚Äôt have to wait long! Not only are many lettuce varieties quick to mature, easy to grow and adaptable to container gardening, they‚Äôre also pretty cold hardy.¬†

You can get the seeds in the ground well before your final frost date. They‚Äôll just need a soil temperature of about 40 degrees F or higher to germinate. For many of the cool-season crops, germination will occur faster with warmer soil, up to a point.

Carrots like cool weather but also a little bit of moisture, so they‚Äôre a great early-season choice. You‚Äôll want to make sure your soil is free of small rocks or similar debris that might disrupt the growth of the carrots.

Carrot seed germination is a slow process, but the seeds will sprout even in soil temperatures as low as 45 degrees. Get your carrot seeds in the ground about three weeks prior to your last average frost date.

Onions are another cold-tolerant vegetable that should be among the first crops you put in the ground in the spring. This is especially true if you plant onion ‚Äústarts‚ÄĚ or ‚Äúsets‚ÄĚ rather than seeds, as the starts are a bit more cold-resistant.

The quicker you‚Äôre able to get your onions in the ground, the faster you‚Äôll be enjoying that extra fresh crunch on your salad or hamburger.

Some varieties of potatoes require a long growing season (120 days isn‚Äôt uncommon), so it‚Äôs in your best interest to get them growing quickly. Fortunately, potatoes definitely fall into the ‚Äúas soon as the ground can be worked‚ÄĚ category. Just make sure the soil is light and loamy (not too heavy) before you start digging your 4- to 6-inch-deep potato trenches.¬†

You don‚Äôt want to try to plant seed potatoes in soil that is still soggy from snow melting and winter rains. Aim for a soil temperature of about 40 to 50 degrees F before planting.

Another root crop to plant in early spring, radishes are the speed demons of the vegetable garden, with some varieties maturing in just 20 days! Couple this with their love for cool weather and you have a quick crop you just might be eating before you even have all of your other vegetables planted.¬†

No need to start spinach seeds indoors. Instead, get them in the ground as soon as you can. Spinach grows well in cool weather and is prone to bolting if the weather turns too warm. Spinach seeds will take root as long as the soil temperature is above 45 degrees.

And the old jokes about Popeye have a bit of truth. Spinach is highly nutritious and healthy!

This is another quick-growing cool-season crop that doesn‚Äôt tolerate heat very well. Aim for a soil temperature above 45 to 50 degrees and get the seeds in the ground a couple of weeks before your last average frost date.¬†

When it comes to cold temperatures, beets are tough. Mature plants in the fall can handle temperatures down into the low 20s, and spring seeds can be planted as soon as the soil is ready and about 50 degrees.¬†

Many gardeners grow beets in succession, planting another round every couple of weeks until the heat of summer becomes too harsh for the plants to thrive.¬†

Nutrition-savvy gardeners know that kale is one of those super vegetables, a great source of calcium and folic acid as well as vitamins A and C.

Kale is a hardy vegetable and one that definitely doesn‚Äôt mind chilly temperatures. In fact, it prefers growing in cold weather and even tastes better during cool temperatures. Why not get some in the ground right away?

As you can see, there are plenty of reasons to get out in the garden and work the soil as soon as you‚Äôre able. With a little bit of cooperation from the weather, you should be enjoying your early spring crops before summer. Have fun!¬†

Vegetables aren‚Äôt your only early-spring option. There are plenty of frost-friendly flowers to brighten up your garden efforts. Depending on your region, some of these may even be planted in the fall for an extra-early spring show.

Cold-hardy as your iceberg lettuce or snow peas may be, a late-spring frost can still cause serious damage if the temperature dips down for a prolonged period during a clear, high-pressure night.

In some instances, you can plan ahead and utilize cold frames to give a layer of frost protection and even encourage your young veggies to mature more quickly than they might otherwise. But even without cold frames, it‚Äôs relatively easy to protect plants early in the year, as they‚Äôre still small and short.¬†

Plastic sheeting can work well for large areas (especially raised beds), but in a pinch you can always use sheets, blankets and towels. For individual small plants, cloches are an obvious choice, but you can also try drinking glasses or even paper/plastic cups.

Watering the garden before the evening of a frost can also help prevent the temperature near the ground from dipping down into the danger zone.¬†

The goal of all of these ideas is to simply add a layer of protection for a brief period. By the next day, it‚Äôll probably be nice and warm again!

This article originally appeared in the January/February 2022 issue of¬†Hobby Farms¬†magazine.