Planters and seeders perform the same function for different crops. Here's what you need to know to use the machines safely and at maximum efficiency. 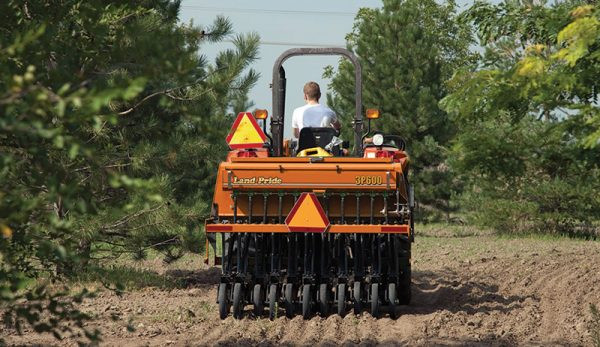 WhatŌĆÖs in a name? In the case of planters versus seeders, itŌĆÖs less about the machines (theyŌĆÖre similar in purpose and design) than the chore.

The term planter is generally used when speaking about a tractor┬Āattachment designed to plant corn and legumes. Seeders (otherwise known as drills) are used to put grains into the ground.

(To learn the basic principles and pricing of farm equipment and machinery that might be good investments for your farm, see our post called Names of Farm Equipment.)

No matter the seeds you plant and the terminology for the machine you use, you need the attachment to work at peak performance for reasons of efficiency and safety. So before you roll your attachment out to the field, take some time to perform a few basic checks.

First, check the height of your planter or seeder.

Many manufacturers recommend the toolbar sit about 22 inches from the ground. Levelness can be affected by many things, including tire differences and a change in tractor. Pump up low tires and, if necessary, adjust the toolbar so itŌĆÖs positioned slightly uphill.

(If a pencil placed on top of the planter/seeder rolls off the back, youŌĆÖve got it right.)

Next, give everything a good once-over. Tighten loose bushings. Inspect your chains and hex shafts. Grease up moving parts and examine seed tubes to ensure theyŌĆÖre not worn.

Finally, get your wheels ready.

Adjust or replace gauge wheels that fail to wipe the opening disc cleanly, and check the closing wheel adjustment. If the mark produced by pulling forward 5 feet on concrete isnŌĆÖt centered between the closing wheels, adjust.

When everything is tightened and tuned, hook your attachment to the tractor and take it for a test spin around the field.

Ideally, yes, and thatŌĆÖs by design. Planters and seeders place seeds into the soil equidistantly and at an optimum rate. This mechanizes a process that, in earlier eras, required a manual approach.

But there are still challenges to using a planter or seeder. This is especially the case when attempting alternative planting techniques, such as no-till.

No-till planting is exactly what it sounds like. Seeding is done without disrupting the soil to reduce topsoil erosion, a common problem with tilling that results in loss of soil fertility. But planting without removing grass, which locks soil in place though protection from wind and rain, prevents topsoil loss.

It all sounds simple enough, but challenges exist. Getting the seeds into unplowed ground is a major one.

Some seeders are specially designed for no-till planting. Other units can adapt a traditional planter or seeder for no-till use. But effective attachment usage is a matter of a few extra steps, such as:

Insufficient planting depth is a common reason for no-till failure, and improper down pressureŌĆöyouŌĆÖll need 500 to 600 poundsŌĆöis often the culprit. Fill unused hoppers with sand, add cast iron suitcase weights or install heavier down pressure springs to get the weight upŌĆöand the seeds down.

Living in the Past

In 1701, an agricultural pioneer from England named Jethro Tull invented a machine that could plant seeds in rows with any desired spacing. The original seed drill was horse-drawn, had three blades that cut spaced rows and funnels behind the blades that directed seeds from a seed box mounted on a the drill.