Play helps domesticated animals learn about themselves and their environment while strengthening companionships. Play is a sign of a healthy animal. 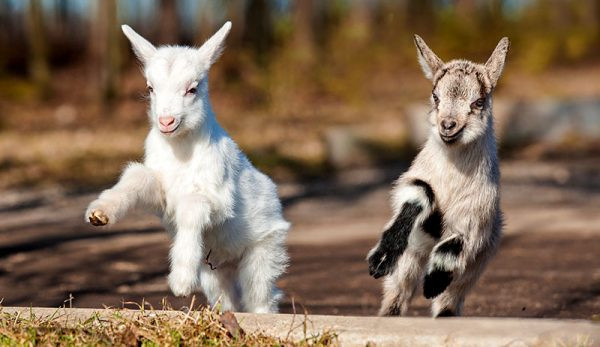 We often think of domesticated livestock and backyard farm animals in terms of the work they do for us. Even earthworms are toiling away, turning food scraps into soil. Cattle process grass into milk, chickens cycle grains into eggs. Thatās a lot of work. Compassionate homesteaders have opted out of factory farming to give our animal companions a healthier, more balanced life. What about fun? Do our farm animals need to play?

The predecessors of domesticated livestock survived in the wild in part because of their play instincts, which are especially important during their development as young ones. For many reasons, play makes animals of all kinds healthier, happier, stronger and smarter.

We can observe several types or patterns of play in our farm animals, and these serve to strengthen them in biological and sociological ways. In addition, much of animal play connects them with their environment.

The most playful farm animals might be goats. Have you ever seen a goat kid being capricious? Thatās why the goat’s subfamily is named Caprinae, from the word ācaper.ā Springtime brings out the springiness in young farm animals. Jumping, galloping, twisting in mid-air and romping about with a gymnastic bounce are some of the exuberant expressions of colts, calves and kids. Itās impossible to hold back a laugh at their goofy antics. Is it pointless? Is all this bounding about just wasting energy?

Solitary play such as spontaneous leaping, lunging, kicking and frolicking builds muscle and strengthens connective tissue. The biological benefits of going all-out with gymnastic expression include increasing stamina, agility, flexibility, strength and responsiveness, and it also hones reflexes. Skeletal muscle development, brain-body connections and self-awareness in relation to surroundings are all important for a healthy animal.

Fighting and Making Up

Playful fights are the norm for puppies and kittens as they learn boundaries with their littermates and their human companions. In the wild, hunting, stalking, charging and wrestling are essential survival techniques. However, most domestic farm animals are prey animals, not natural predators. Self-defense is a way they fight back. Those rambunctious kicks that calves throw around are one way of fending off a predator. In most domesticated farm animals, fighting serves as a means of establishing a hierarchy, or it displays abilities that will attract a mate.

Some play-fighting can escalate into real fights. Piglets are prone to this, and calves are more likely to turn a game into a fight as they mature with age. Other types of social play can be much more complex. Mothers generally teach their young the difference between acceptable and unacceptable behaviors, which is an important reason to let parents stay with their offspring during the young animals’ early development. Preening often follows a play-fight session and engenders closer companionship.

Other sociological purposes of play fighting include establishing dominance and submissiveness, testing boundaries and deepening bonds; it also aids with weaning. Young practice vying for new territory, and eventually they take those skills into the mating and parenting roles.

Wild birds such as corvids (crows, ravens, magpies) are best known for their intelligent manipulation of sticks, rocks and other found objects as playthings as well as tools. The landscape itself can be an object of play. Tossing a ball around or chasing a stick gives animals an objective while they feel the land under their hooves, claws or paws. Unintentionally, this agility and dexterity exercise also acquaints animals with the various textures and features that identify a territory as their habitat. Experiencing the changing landscape throughout all the seasons promotes learning and adaptability.

Each animal builds a unique relationship with the environment, and play is a tool in itself that helps create the mental map of hiding places, perching spots, shortcuts and lookout points. Knowing how their world feels and navigating it in different circumstances (moist and squishy in the spring, dry and clumped in the summer) helps them become more responsive and resourceful in dealing with changes.

There are many similarities to the ways that humans play, but use extreme caution when considering playing with farm animals. Take time to watch them play on their own and learn as much as you can about what their behavior means before engaging with them. For example, scratching a ram on the head can initiate head-butting, an instinctual move to dominate you as one of the flock. It could be light at first but escalate without any warning and cause serious injury.

Play is as necessary as naps for animals to be healthy. Boredom and loneliness can be detrimental to an animal. Lack of space, companions or suitable objects inhibits play and reduces well-being. Ducks, for example, need other feathered companions or they become easily stressed. Likewise, when you see animals at play, it’s an indicator of well-being. When domestic animals play, it shows that all their needs have been met and energy is available for positive emotions.