Chicken feathers come in an astonishing range of colors and patterns, which help to make each breed recognizable. (An excerpt from "The Illustrated Guide to Chickens") 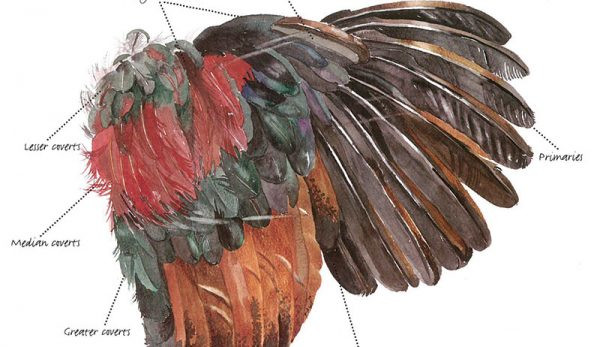 Plumage plays an important role, protecting the chicken from rain, cold and sun, and a chicken must spend a considerable part of its time maintaining it. This is done by preening. Each feather has an axis or shaft, on to either side of which vanes are fixed. Each vane has barbs on either side, which cling together but need to be â€ścombedâ€ť by the chicken, who also applies oil from a gland at the base of its tail.

A cockerel can be distinguished from a hen by the fact that some of its feathers take on a different shape. Its hackle and saddle feathers are thinner and longer than a henâ€™s, and it also develop sickles, which are the spectacular curved feathers on either side of the tail.

Some breeds have much fluffier feathers than others, and game breeds have very tight feathering that often leaves a strip of bare skin down the breast. There may be feathering on the legs, and some breeds sport beards, muffs and crests.

Every year, hens molt, generally at the beginning of fall, and replace their old feathers with new. As feathers are largely made up of protein, this takes a good deal of the hensâ€™ energy, and itâ€™s important to give them plenty of replacement protein in the form of good quality layersâ€™ ration at this time.

A hen will stop laying until her molt is complete, which could take anywhere between six and 12 weeks. If the days are growing shorter, she may not start laying again until they start to lengthen after the winter solstice.

An Illustrated Guide to Feather Markings

Barring: Two distinct colors appear in bars across the feather; they may be regular or irregular and the width can vary.

Lacing: Appears as a border of a different color right around the edge of the feather; it may be broad or narrow.

Double Lacing: Same as lacing, but this has a second loop inside.

Frizzled: Each feather is curled, causing the bird to look distinctly unkempt.

Mottled: This is being spotted in a different color in a random fashion.

Spangling: There is a distinct contrasting color at the end of the feather.

Splash: This appears as drop-shaped marks of a contrasting color in a random fashion.

Penciling: This is the tricky one as it goes more or less with the breed. Mostly it can look like a kind of barring, but it can also be fine lacing. Hamburg hens have stripes, and the dark Brahma has concentric lines around the feathers similar to lacing; both are known as penciling.

Peppered: Feathers look as if someone has ground pepper onto them, the specks being a darker color.

Cuckoo: male and female dark gray to black indistinct barring on white ground. Female can be darker than male.

Exchequer: male and female black and white randomly over body in blobs

Reprinted with permission from The Illustrated Guide to Chickens (Skyhorse Publishing)Â by Celia Lewis. Copyright 2011 text and illustrations by Celia Lewis.

Living in the English countryside, Celia Lewis is lucky enough to keep hens and guinea fowl in addition to cows and sheep (along with nearby pigs). This is where she finds her inspiration.