Poultry Profiles: Get to Know the Plymouth Rock Chicken Breed

The Plymouth Rock is a versatile heritage-poultry breed, ideal for eggs, meat, temperament, mothering and appearance. Here's all you need to know. 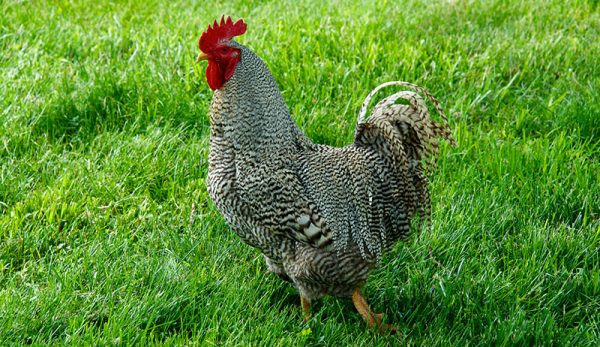 Are you contemplating expanding (or starting) your flock? Consider the Plymouth Rock. The progenitor of such poultry breeds as the Buckeye, Orpington, Delaware and California Gray, this heritage chicken was at one point the most extensively raised barnyard bird in America. With the advent of post-World War II commercial poultry farming, breeding of the Plymouth Rock chicken breed experienced an enormous decline. The breed is now in recovery status, and hobby farmers across the country are rediscovering why the Plymouth Rock is once again becoming one of America’s favorite backyard birds.

Looking for delicious, farm-fresh eggs? Whether you want to feed your family or start your own egg-selling business, the Plymouth Rock chicken has you covered. Plymouth Rock hens are fabulous producers, laying approximately 200 large brown eggs annually. Just three Plymouth Rock hens produce an average of one dozen eggs per week, enough to keep you happily scrambling, souffleing and sunny-side-upping all year long.

Safety is a major concern for those raising a family as well as chickens. Having a child chasedãor worse, attackedãby an aggressive rooster is a parent’s nightmare. The Plymouth Rock, however, is bred for docility and renowned for its tranquil, friendly temperament. Males and females of this chicken breed tame and train quite easily and are almost downright affectionate toward their human handlers. Their calm, gentle nature makes them the perfect choice for those new to poultry-keeping as well as those who plan to have their little ones help with the chicken chores.

If your poultry plan is to raise birds to fill yourãor someone else’sãfreezer, you can’t go wrong with Plymouth Rocks. As a dual-purpose bird, the Plymouth Rock chickenô excels at egg and meat production. Its deep, full breast, meaty body and ample market weight (an average of 7 to 8 pounds) make theô  Plymouth Rock a superlative table bird. In fact, in the 1920s the Plymouth Rock served as the foundation breed for the American broiler industry. Today, it still serves an active role in the meat-bird industry, not only as itself but as one half of the popular Cornish Cross broiler.

If you plan your flock to be self-propagating, it helps to have hens who happily set eggs and raise your next generations. Plymouth Rock hens have deservedly earned their reputation as excellent mothers, tirelessly brooding their clutches and faithfully caring for their offspring until the chicks are old enough to survive on their own. Nothing is more heartwarming and picturesque than a Plymouth Rock mama hen herding her babies around the barnyard, instructing the little fluffs on the ways of being a bird.

A key consideration when selecting a breed is its adaptability, not only to your region’s climate but also to the manner in which you raise your flock. If you reside in the northern half of the United States, you want a winter-hardy bird that tolerates the region’s bitter cold. The Plymouth Rock fits the bill perfectly. Developed in Massachusetts, the Plymouth Rock not only easily adapts to the cold but also prefers to remain active when the temperatures drop. The Plymouth Rock’s versatility also extends to its living environment, thriving in various settings including fully enclosed coops/runs to free-range conditions. Simply provide food, water and safe places to roost and nest, and the Plymouth Rock is happy.

“How many colors does it come in?” might be a stereotypical shopping joke, but it can definitely apply to poultry-keepers. Once we find a breed we truly love rearing, we become curious as to the number of varieties available, just to add a little color or pattern to a flock. The American Poultry Association recognized the Plymouth Rock in 1874 and currently recognizes seven varieties, each with its own Standards of Perfection. The Barred Plymouth Rock (frequently called Barred Rock) is the original Plymouth Rock, featuring regular, sharply defined, alternating bars of pale gray and charcoal; yellow shanks, toes and beak; red eyes and earlobes; and an upright, five-pointed single comb. Other varieties include White, Buff, Columbian, Blue, Silver Penciled and Partridge (pictured above)ãplenty of options for a chicken owner wishing to add color to the flock.

It doesn’t take much prompting to get a poultry-keeper to start talking about chickens. The Plymouth Rock’s origin tale, however, features soap-opera-style drama that would interest even the most indifferent listener. At an 1800s Massachusetts poultry exhibitionãreports list this event as occurring inô 1829 as well asô 1849ãa stunningly barred bird with yellow legs and beak was presented. While there was great interest, these original birds lost their identity. Nothing more is stated to explain the disappearance, and nothing more was heard about it until it reappeared at an 1869 poultry exhibition in Worcester, Massachusetts. Because of its outstanding production traits, temperament and appearance, this new breed was an instant hit. Today’s Plymouth Rocks descended from those Worcester show birds.

There is discord, however, as to who originally bred the Plymouth Rock. Many poultry enthusiasts claim credit, including D. A. Upham, who exhibited the birds at the Worcester show and alleged that he bred them by crossing Black Javas with a common, single-comb rooster. Other claimants note the use of Black Cochins, Dominiques, (IL link) and Brahmas (OK) in addition to Black Javas. In the end, we might never know exactly who is responsible for creating the Plymouth Rock or which birds served as its foundation breeds, but one thing is certain: Thousands of poultry lovers around the country are grateful to have this remarkable bird in their flocks.