Poison Ivy: Facts About How It Affects Humans & Animals

I've never had the bad skin reaction to poison ivy, but I'm a goat, so I'm not susceptible to it. Humans are, however. Here's what causes it and how to avoid it. 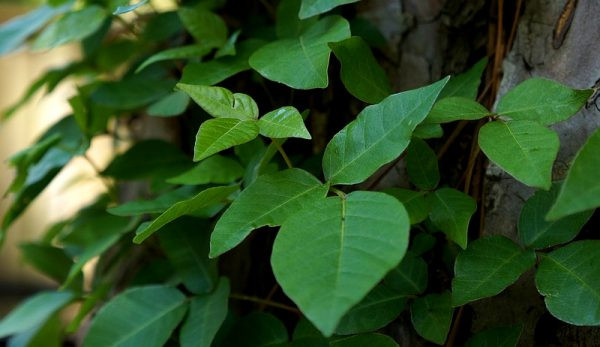 Have you ever had poison ivy? I don’t mean the plant, I mean the itchy rash and blisters. I have notâ€”but I’m a goat. Most animals don’t have the icky reaction to poison ivy, and to goats, poison ivy is just a tasty weed. However, according to the Poison Ivy, Oak and Sumac Factsheet published by the Texas Department of Insurance, approximately 90 percent of Americans are allergic to urushiol (pronounced oo-roo-shee-ohl), a chemical in the sap of poison ivy, poison oak and poison sumac plants. Ow!

Urushiol is so potent that 500 people could itch from the amount of urushiol covering the head of a pin. One-quarter ounce of urushiol could cause a rash in every person on Earth. Only one nanogram (that’s a billionth of a gram) is needed to cause a rash in one person, and the average person is exposed to 100 nanograms each time they come in contact with it. Urushiol stays active for as long as five years, even on dead plants and garments, such as jackets and hiking boots. Specimens several centuries old have caused rashes in sensitive people. Urushiol is very potent stuff!

Poison ivy grows throughout the United States, southern Canada and northern Mexico, except at high altitudes and in arid desert climates. Identifying poison ivy can be tough. Sometimes it grows like a low shrub and sometimes it vines. It even grows up fence posts, walls and trees. Poison ivy has three somewhat shiny leaves on the same stem, and they’re green during the summer months but turn red in the fall, often blending with the surrounding plants. Some people seem to be immune to poison ivy, but if that’s you, don’t be complacent. Sometimes immunity fades. It’s always best to avoid this plant. (If you want to get rid of poison ivy on your farm without using harsh chemicals, see 6 Natural Ways to Kill Poison Ivy.)

So what do you do if you look down and you’re tramping through a patch of poison ivy? Urushiol can penetrate your skin in minutes, so wash yourself down as fast as you can. Water from a stream or water bottle can help, but get home as fast as possible and clean the area with lots of rubbing alcohol. Then take a shower with soap and warm water.

If you don’t get urushiol off in time, you’ll break out in a rash in as little as four hours or as long as four days. Poison ivy rash and blisters disappear in two to three weeks without any treatment, but the condition itches intensely in the meantime. Try not to scratch! Scratching blisters open can cause infections, so soothe the itch and dry up them up using calamine or kaolin lotion, zinc oxide, baking soda paste or over-the-counter hydrocortisone products.

Be careful if your dog or goats stroll through a poison ivy patch. We can carry urushiol on our coats. If you believe this has happened, give us a warm, soapy bath and be sure not to pet us â€™til you do.