The Polish chicken breed is used mainly for exhibition. Some strains lay three to four medium-sized, white eggs per week while others are mediocre layers. 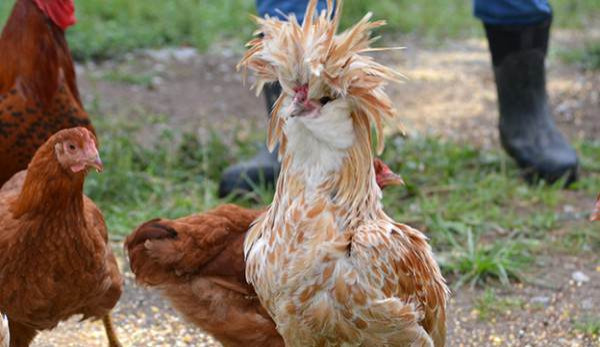 Use: The Polish chicken breed is used mainly for exhibition. Some strains lay three to four medium-sized, white eggs per week while others are mediocre layers.

History: The origin of the Polish chicken breed is obscure. It didnâ€™t originate in Poland; rather, breed historians believe Spanish immigrants who settled the rich lowlands of the southern Netherlands in the late 1500s brought the chicken breed with them from Spain. Dutch fanciers developed the Polish chicken breed, which is widely depicted in Dutch and Italian paintings from the 16th through 18th centuries. Crested Polish chickens were mentioned as purebred in the 16th century, according to the American Poultry Association, and were imported to America between 1830 and 1840. The breed was, for a time, a favorite with American farmers and chicken fanciers. The American Poultry Association accepted three Polish varieties into the American Poultry Associationâ€™s Standard of Perfection in 1874; additional varieties were accepted in 1883, 1938 and 1963.

Conformation: Although the APA prefers Polish chickens with a natural absence of a comb, itâ€™s acceptable for the breed to have a small, V-shaped comb and bountiful crest of feathers sprouting from a cone-shaped protuberance on its head; some varieties are also bearded. The breedâ€™s lavish crests rest like a pouf over its eyes, making it difficult for the chicken to see, though the APA breed standard is for the crest to rise well in front so as not to obstruct sight. The Polish chicken breed comes in both standard and bantam sizes in an array of colors, including Black-crested White, White-crested Blue, Golden, Silver, White and Buff Laced. Standard Polish cocks weigh 6 pounds and hens weigh 4Â˝ pounds. Bantam cocks weigh 30 ounces and hens weigh 26 ounces.

Special Considerations/Notes: If a Polish chickenâ€™s crest gets wet and dirty, it can hang directly in its eyes, leading to eye infections and the inability to locate food and drink. Some Polish fanciers who donâ€™t show their birds trim bangs in their crests to eliminate these problems.