My husband and I spent this past weekend ripping out our silly little pond and waterfall. We knew we would eventually remove it. In theory, it was a nice water feature, but from a design standpoint, it stuck out like a sore thumb … actually worse than a sore thumb to me. 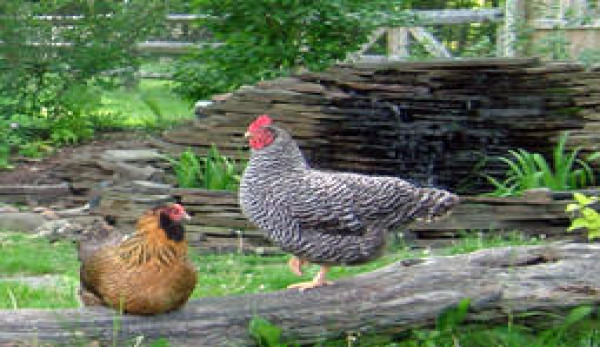 My husband and I spent this past weekend ripping out our silly little pond and waterfall. We knew we would eventually remove it. In theory, it was a nice water feature, but from a design standpoint, it stuck out like a sore thumb … actually worse than a sore thumb to me.

It just looked ridiculous—a misfit landscape feature that was just plunked there without much thought. So now that we are having a backyard renovation, we figured, what the heck, let’s get it out now while the getting is good and our landscaper can easily fill the hole with his skid steer and some of the extra soil he’ll be carting out during the grading process.

Mind you, removing said waterfall is only half done, and it’s a heck of a mucky job. It consists of about several thousand flat flagstone and shale rocks stacked on top of one another for about 4 feet up and 6 feet across. Each piece needs to be carried out and piled on the side for later use or loaded in the tractor cart, driven out the back gate and stacked in the woods.

But before we started lugging the rocks, we had to catch our two koi, Goldie and Genevieve, in a net and relocate them to a neighbor’s water feature. They lost two of theirs to a raccoon this winter and were happy for the new family additions.

Then we managed set up the pump to drain the pond rather than re-circulate it. It took about three hours of pumping the water out onto the driveway to drain it and one more hour to cut out (read: wrestle with) the liner. What I found beneath was way more disturbing than I was prepared for.

Whoever built the pond didn’t use one continuous sheet of pond liner but rather six smaller pieces barely overlapping one another (which would explain why the darn thing was always so leaky). Then underneath the liner pieces is about 5 inches of play sand, which has remained permanently wet for as long as the pond has existed. It is slick and slimy and pretty disgusting. And to make matters worse, I’m pretty sure when it dries out, it’s going to be much like concrete.

The next step in the project is to finish hauling away all the rocks (many of which will be used to build a new retaining wall and create a stepping stone path to the veggie garden) and to get out the last piece of liner that is currently wedged under a pile of gloppy river rocks someone threw into the bottom of the pond (probably the two little boys who lived in the house before us). Then we have to fill up the hole, build said retaining wall and plant a nice new little garden.

I’m hoping it will only be three or four more days of work but time will tell. Sometimes our projects have a way of getting away from us. I’m sure you know what I mean.