Pop Goes the Farm: Capitalize on America’s Love of Popcorn

Popcorn is fun and easy to grow. Here's a brief history of popcorn as well growing methods and recommended varieties. 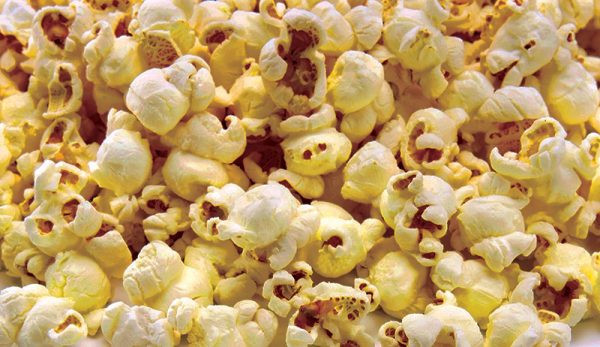 The bursting sound and wafting smell of salty, buttery, goodness can be found at stadiums, carnivals, homesteads and, most notably, movie theaters. Popcorn is as American as apple pie. But that hasn’t always been the case.

Archaeological and genetic evidence of the origin of popcorn throughout Central and South America, particularly Guatemala, Mexico and Peru, is extensive. On a recent excursion to Peru, I learned that the country has more than 55 varieties of corn. When I sampled the popcorn, each large flake’s sweet flavor and shape surprised me.

There are two main structures of popcorn: mushroom and butterfly. The 2-inch pieces I sampled are known as mushrooms for their consistent puffball form. Confectioners prefer this variety for its shelf life. In movie theaters, however, butterfly, aka snowflake, is the mainstay for its texture and mouthfeel.

To learn more about the history of what might be the oldest snack food, I contacted Dolores Piperno, senior scientist emerita of the Smithsonian Tropical Research Institute and Smithsonian National Museum of Natural History.

“The wild ancestor of corn is a wild grass called teosinte [Zea mays ssp. parviglumis],” she says. “The earliest maize discovered so far was like a popcorn, and it turns out that teosinte grains can be popped.”

Because both grains have similar types of endosperm, both react to heat the same way.

“Scientists wondered for a long time how teosinte was used as a food by the earliest cultivators of corn, since its kernels were enclosed in the fruit case,” she says.

It appears teosinte was popped in order to be eaten. It wasn’t until later in its evolution that other types of maize, such as field, flint and sweet corn, were bred.

“Geneticists compare the DNA sequences of modern varieties of corn with related wild species that can still be found growing today and that could potentially be ancestral, and the proof is hard and firm,” Piperno says. “Also, importantly, within the past decade or so, geneticists are carrying out ancient DNA studies directly on remains of crops excavated from archaeological sites. These analyses have moved forward our understanding of how corn evolved through thousands of years of agriculture from teosinte.” 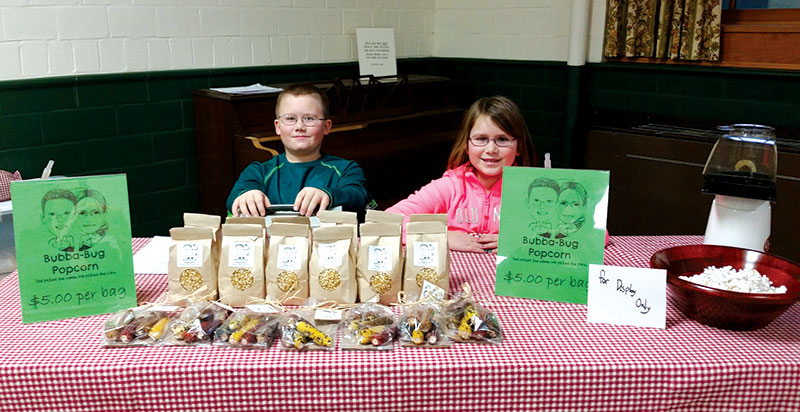 Ethan and Natalie Pratt, ages 12 and 10, respectively, own Bubba-Bug Popcorn. Five years ago, they asked their mom if they could open a lemonade stand. She told them that lemonade stands don’t work on an empty country road. So these two inspiring entrepreneurs came up with the idea of selling popcorn. They chose and planted varieties, hand-picked each ear at harvest time, shelled the corn with an old hand-cranked sheller, and packaged it up and delivered it to customers. They’ve been growing their business ever since. Here is some planting advice from these young, but seasoned farmers.

Find out more about the popcorning Pratt siblings at Illinois Farm Girl.

The popularity is like the act of popping itself: slow at first, with a few booms, followed by a firestorm of kernels exploding into delightful puffs of air and starch.

By the mid 1800s, it was a prevalent snack food because of the entertainment value of its popping process. In 1885, Charles Cretor invented the first steam-powered popcorn maker. This allowed vendors to sell the snack at outdoor sporting events, circuses and fairs, a large advantage over the potato chip, which needed to be made in small batches inside a kitchen. Street vendors took advantage of popcorn’s appealing aroma to boost sales. The only place popcorn wasn’t available? Inside movie theaters. Imagine an audience full of popcorn eaters, chomping away while watching a silent movie!

Most popcorn sold during this time was white because yellow corn wasn’t commercially grown and cost twice as much. However, popcorn vendors preferred yellow corn, which popped more, causing more volume for less seed. The yellow tint also gave the impression of a butter coating. The public started refusing the white variety at markets, requesting “movie popcorn.”

By 1930, nearly 90 million people every week went to the movies. Movie theater owners’ eyes glazed over with dollar signs, as patrons came to the theater with street popcorn in hand. The release of talkies and sound movies also persuaded owners to allow the crunchy snack into theaters.

At first, owners leased space to vendors in the foyer or on the street in front of the theater. By 1945, newer theaters contained dedicated areas for popcorn to be made and sold. At this time, more than half of the popcorn consumed in America was eaten at movie theaters.

In 1946, engineer Percy Spencer conducted experiments at Raytheon Corp. with a magnetron. After discovering that a chocolate bar melted nearby, he experimented with other foods. When corn kernels were close, they popped, and the creation of microwave popcorn led to the invention of the microwave. The first commercial microwave measured 6 feet tall, weighed 750 pounds and cost $5,000 at the time (nearly $70,000 in 2017 currency). In the 1970s and ’80s, counter-sized microwaves became widely available.

Today, white popcorn accounts for 10 percent of commercially grown popcorn, with yellow being the most popular. Try these varieties to add a pop of color to your homestead.

This ancient white popcorn produces two to three, 4- to 6-inch-long ears per stalk. It was first found in a pottery container dated to be 600 to 1,000 years old in the Burro Mountains of Grant County, New Mexico.

This flint/popcorn may be the oldest corn variety grown in North America. Carbon dating shows that it could be 4,000 years old. Long, slim ears are filled with shining-amber to dark-brown kernels. It also has great drought and heat tolerance.

This variety produces a beautiful blend of brightly colored long ears, 5 to 7 inches long; they are wonderful as fall decorations as well as popping.

Dark reddish-black ears of corn are quite attractive for fall decorations or popping into delicious popcorn. This variety is easy to grow and does well in almost all growing climates.

This variety of popcorn produces translucent multicolored kernels that shine like glass. The 3- to 8-inch ears are decorative but also edible and tasty. Sturdy plants reach 9 feet tall and throw numerous side-shoots where the season is long enough.

These 4- to 5-foot plants yield as many as four multicolored ears each. The ears are as long as 5 inches and include shiny kernels in red, blue, purple, yellow and white. Ears are produced curiously low on the plants.

These cute, 2- to 5-inch ears are independently indigo or mauve to rose pink. Plants can reach 6 to 7 feet and yield as many as four ears per stalk. When popped, the kernels have a nutty flavor.

This is a popular, cute variety whose little ears of corn look just like big strawberries. The 4-foot plants produce two to four ears each.

This traditional Native American corn makes a stunning ornamental display and can be dried and popped for a tasty snack. Tall, sturdy plants create a natural trellis for climbing beans.

Other Seeds That Pop & Puff

While popcorn is certainly king, there’s a whole world of popped grains out there. Other grains you can try popping include:

Ginger Grubb and her husband Bill began growing popcorn soon after they got married in 1972. They live on a heritage farm in south-central Iowa that has been in his family since 1874. “My father asked if he bought some good tasty seed he had found, would Bill plant it for him,” Ginger says. “We planted a couple of rows alongside the field corn, and we picked it by hand in the fall. The neighbors liked it so well that we planted a few more rows and then a couple of acres. In 2010, a friend of mine and I went into business selling popcorn to a few grocery stores. We were planting eight to 10 acres of popcorn.”

Once you have selected a variety that is suited to your area, sow the seeds directly into the ground. Several short rows, similar to growing sweet corn, will ensure good pollination. Don’t plant sweet corn in the same area as popcorn as they will hybridize. Water, fertilize and weed regularly.

“The key to having popcorn pop is the amount of water in the hull,” says Wendy Boersema Rappel, a spokesperson for the Popcorn Board. “Processors dry popcorn to about 131⁄2 percent moisture.”

Allow the cobs to dry in the field as long as possible. When picked, the kernels should be hard and the husks completely dry. Place the ears in mesh bags, and hang in a warm, dry, well-ventilated area. Once a week, try popping a few kernels. If the test kernels pop well and taste good, harvest the rest of the kernels. If the popcorn is tough or the popped kernels are jagged, they are too wet and need to dry longer.

“To get a good crop, we check the moisture levels in the fall before harvesting and pick when it is 141⁄2 percent or close to that,” Grubb says. “If it is too dry or too wet, then it doesn’t pop at all well.”

“Storage is important to keeping that moisture in, so keep popcorn in a sealed container, away from extreme heat sources,” Rappel says.

When stored properly, popcorn will retain its popping quality for several years. Make sure the area is rodent-proof. If stored popcorn doesn’t pop, it might be too dry. Add 1 tablespoon of water to a quart of popcorn. Shake until the popcorn has absorbed the water, and attempt a few trial runs.

While Rappel doesn’t have a favorite variety, she likes to keep it simple using a stove top with oil and a touch of superfine popcorn salt.

“When I make a treat, my popcorn usually contains melted peanut butter and chocolate,” she says. “Popcorn has been around for thousands of years. Its staying power has a lot to do with its great taste, but also the fact that it’s a bit magical.”

Kenny Coogan, CPBT-KA, has a Bachelor of Science in animal behavior and is a certified bird trainer. He is a pet and garden columnist and the author of the children’s book A Tenrec Named Trey (2013).