Photo by Rick Gush I love the orange poppies from my home state of California, but the red poppies of Italy are striking and exotic to me. One of the reasons I really like living in Italy is that so much of ordinary, everyday existence is exotic to me. For example, I get a big […] 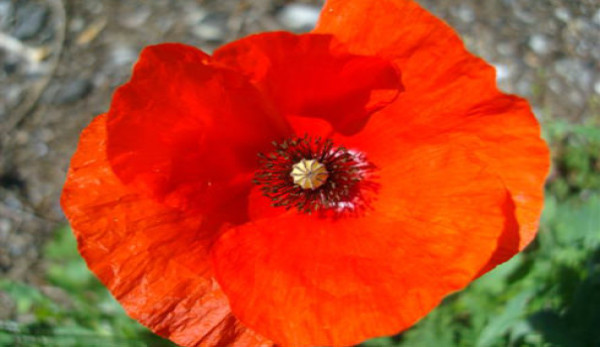 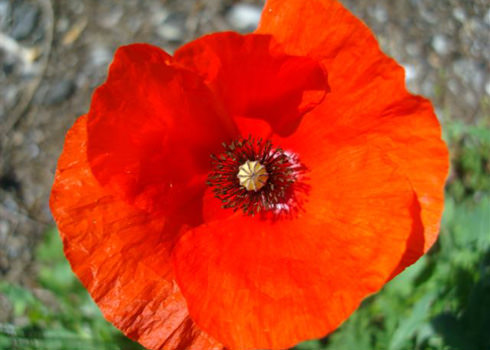 I love the orange poppies from my home state of California, but the red poppies of Italy are striking and exotic to me.

One of the reasons I really like living in Italy is that so much of ordinary, everyday existence is exotic to me. For example, I get a big kick out of having so manyÂ red poppies flowering around here now. Iâ€™m fairly used to poppies blooming near me in the spring, except that the poppies in California were the orange Eschscholzia californica, and here in Italy they are the red Papaver rhoeas. So basically, I get excited just because one of the common wildflowers in my world is a different color. I am obviously a profound person.

I took the train yesterday to Milan and back, which ends up being two nice two-and-a-half-hour trips, during which Iâ€™m free to snooze, read the paper and gaze out the window. We travel through a nice mix of coastline, mountains, foothills and flat plain, and I get to see a wide range of agricultural activities. Yesterday, the red poppies were at the peak of their season, and they were everywhere.

Poppies like the uncultivated areas, so there are a lot of them along the train tracks. The Italians arenâ€™t big on keeping things neat and tidy, so many of the train-station areas resemble the worst areas of Detroit. Ironically, the worse the train-yard, the more poppies there will be. So for a few days each year, the ugliest stationsâ€”blanketed with thousands of wildly blooming red poppiesâ€”are actually the prettiest.

The fields alongside the tracks are also dotted with poppies. In a dozen or so spots along the train journey, I saw huge rectangular fields covered entirely in red blooms. Iâ€™d guesstimate that the largest of the poppy-covered fields might have been 10 acres or so. Thatâ€™s a lot of red! Iâ€™m not sure what the farmers have done or not done to have so many poppies growing among their crop, but it was obvious that some cultural practice was involved.

My own poppy patterns in the orto this year have changed, and the reasons are probably similar. I didnâ€™t plant any seed, so everything this year is volunteer.

In the most intensely cultivated areas, there are almost no poppies. The most vigorous plants seem to be along the pathways and steps. I strongly suspect that both cultivation and watering are not beneficial to poppy growth. I donâ€™t think poppies are particularly aggressive either.

This year, on the big slope on the south end of the gardenâ€”where last year I had carefully tended the main planting of poppies and enjoyed a fairly spectacular show of bloomsâ€”there are almost no poppies growing among the thick grass and other weeds. I was hoping the poppies would colonize that area, but I donâ€™t think thatâ€™s going to happen.