Get To Know Porcupines: More Than Painful Pests

Porcupines live a long time, climb trees, help forest ecosystems -- and can float on water. They're not predators, but their quills are dangerous. 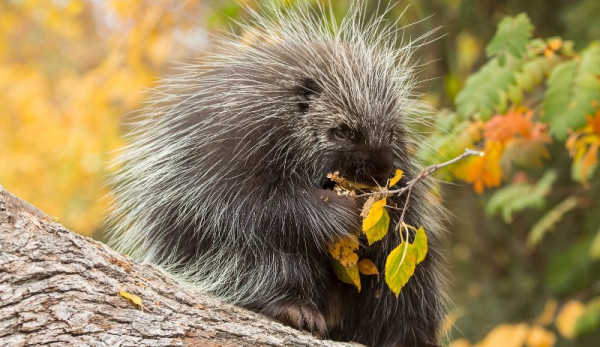 One dark, misty night on a Maine peninsula, I encountered a feared creature, known for causing screams of terror and pain in backyards, woodlots and playgrounds. Cloaked in the veil of fog and darkness, a low shrubby shape moved closer, then closer … then close enough that I realized it was a massively spined, near-sighted animal that hadn’t a clue it was about to walk across my foot! My reactionâ€”running as fast as I could to get away from the unaware porcupineâ€”kept both of us safe. After I regained my composure, I was fascinated with the mysterious little animal, and I cautiously watched it from a safe distance. Although I could not see well in the foggy, dim light, I could tell the porcupine was nibbling on vegetation. Mostly grasses and clovers made up its summer nighttime snack, and it seemed blissfully unaware of my presence a few feet away.

North American porcupines (Erethizon dorsatum, which means “irritable back”) are quiet, reclusive, nocturnal creatures that do very little to provoke a fight. Why donâ€™t we see porcupines before we have an unfortunate encounter with them? Where are they hiding during the day? Can we coexist peacefully with such prickly wild animals in our gardens and around our farms?

Despite the porcupineâ€™s low profile and slow, hunched amble, it is quite the climber. Sharp, curved claws equip porcupines’ broad, flat feet for scaling trees. The stout tail not only holds their defense mechanisms but also serves as a supportive appendage as they climb up and down trunks. They have excellent senses of smell and hearingâ€”all the better for this woodland creature to communicate with a wide range of sounds. You might hear them chatter, squeal, cough, grunt or whine. Porcupines make all these sounds and more when they get together to court during the late fall and winter. They also affectionately rub noses to get to know their potential mates and aggressively fight off competitors. One porcupette, a baby porcupine, is born each year in the spring and can live as long as 15 years.

They live long in part because of their prickly reputation in the wild world. However, there are natural porcupine predators such as bobcat, lynx, great-horned owl, fisher, wolverine and mountain lion. People hunt porcupines as well. Their meat has been a traditional staple for many indigenous North Americans, and the quills an important material for basketry and decorative crafts.

Perhaps the most common cause of porcupine fatalities, after cars, is falling out of trees. Not a graceful way to die, but with all the tree trimming they do, itâ€™s bound to happen. Reaching out too far for tender leaves and buds can send them tumbling to the ground. But nature has got the porcupineâ€™s back, in a sense. If an impaled quill is left to work itself out, no infection will occur. An antibiotic oil coats the quills, likely an adaptation that serves as a safety net for self-inflicted wounds.

Porcupettes are born ready to rock and roll. Their eyes are open, they have developed teeth, and within an hour after birth, their soft hairs stiffen into quills. The porcupineâ€™s hair is adapted into the barbed quills on roughly half of the animalâ€™s body. The belly, face, and inner legs are soft and furry. Those are the places a threatened porcupine will protect, balling up with nose between legs and turning to present the armored backside. Before resorting to contact, the porcupine might give a warning: a musky odor or a clattering of their teeth. Next comes a display of as many as 30,000 erected quills. The final move is a quick lash of the tail, aiming for the face of the victim. Quills donâ€™t shoot out, but they are easily released.

Porcupine roadkill is a frequent sight in the western states where Iâ€™ve lived. Once, I was traveling with a naturalist who stopped at the sight of a porcupine dead on the side of the road. With needle-nose pliers, she pulled a few quills from the carcass and offered me one. I examined it carefully. The quill changes in hue along its length as the structure changes from a light, hollow, spongy tube to a dense, sharp, finely barbed tip. I marveled at the design of the cute, waddling animal and the variety of functions of its infamous adaptation, the quill. Not only do the quills help the porcupine climb and keep predators away, the sponginess traps air and makes a 30-pound porcupine buoyant in water. While they might seem bizarre and contentious, this porcupine was going about its natural walk in life until it was killed by the dominant predator, a motor vehicle. To keep a quill from the fallen little warrior felt like a dishonor, so I declined to hold onto it.

At about two weeks of age, a porcupette begins foraging on spring greens. Wildflowers, clover, shrubs, vegetable crops, tender twigs, seeds, fruits and nuts are the spring and summer diet. As the seasons change and the young rodentâ€™s teeth grow, tougher food supplies fill the herbivorous diet. Pine needles, woody stems of shrubs, and the bark of trees such as hemlock, beech, aspen, oak, willow and spruce become their food. The porcupineâ€™s incisors keep growing, so they have to gnaw on wood to whittle them down. This could be a problem if the tree-to-porcupine ratio is out of balance. Like any environmental stressor, too much intrusion on a tree makes it susceptible to other problems; drought, bark beetles, infections and other risks can be exacerbated by porcupines, but itâ€™s a combination of many factors that results in massive tree losses.

Porcupines arenâ€™t as problematic as some other wild animals, and in most cases provide a natural tree pruning service that keeps a forest stand healthier. Unlike beaver or rabbits, porcupines can ascend tree trunks and nibble on branches. Dropping twigs and fruit to the forest floor benefits other wildlife down below. The thinning of higher branches allows sunlight to penetrate the earth below and give the understory rays of light, increasing the diversity of plant life in the forest.

If you want other wild animals to keep their distance from your property, a porcupine might be a good ally to have around. Wise wildlife know that the barbed quills are the weapons that keep on working, drilling into flesh about an inch a day. If a quill punctures a vital organ, the victim could die a slow and painful death.

If you have a dog outside, it is more likely to find a porcupine than you are. When I worked as a veterinarian’s assistant, I helped with a few of these cases. Usually, the veterinarian sedated and then clipped quills on the inside of a dogâ€™s lips. I also have heart-wrenching childhood memories of our familyâ€™s beloved labrador mix crying with a bloody, barbed snout. A study of nearly 300 cases of dogs with porcupine quills concluded that getting immediate medical attention, within the first 24 hours, is key to avoiding complications. Donâ€™t try to pull the quills out yourself or you could make matters much worse.

If you have porcupines, you probably have good porcupine habitat. Porcupines in the wild are more likely to live in rocky, inaccessible areas, which provide seclusion for their dens. They arenâ€™t very social, and as you might imagine, would rather not share a den with another porcupine. They have a biological need for salt and seek it out. Natural salt deposits attract them, and if they are desperate they might go for salty wood, seasoned by human perspiration. Porcupines have been known to chew on tool handles and canoe paddles. As noted above, porcupines will eat lots of good fruit and veggies, especially if it is easy to reach. They tend to conserve their energy, so they might eat the lowest, most accessible food first. This could result in girdling of young trees, but for the most part, porcupines do relatively little damage.