It feels a lot like the dyed Easter Egg hunts I loved as a kid, and staged for our daughter when she was little. 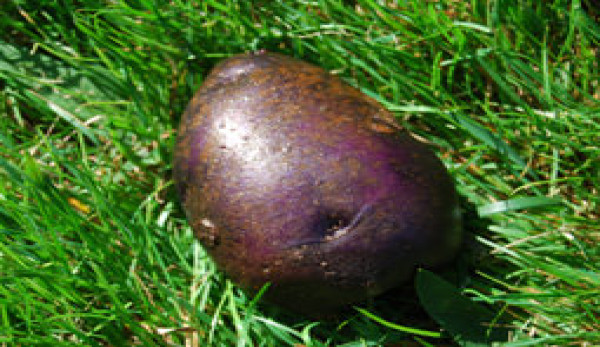 It feels a lot like the dyed Easter Egg hunts I loved as a kid, and staged for our daughter when she was little.¬†

The building anticipation as you seek something cunningly hidden ‚Äď something special and pretty ‚Äď followed by the delicious thrill of finding each brightly-hued egg, and the satisfaction of adding it to the growing pile in your basket.

This must be what it feels like to be a pirate who finds buried treasure, too.

I‚Äôm talking about digging potatoes, something I can‚Äôt wait to do this afternoon.¬† But not just any old potatoes ‚Äď purple potatoes.¬†

Several years ago, my eyes opened to the wonderfully (and genetically) diverse world of heirloom plants.¬† Essentially, these are open-pollinated plant cultivars with long histories, many of them endangered because they fell out

of favor as the popularity of commercial hybrid cultivars boomed.¬†

I‚Äôve always been a fan of potatoes, but now love them even more as I continue to discover different heirloom varieties.¬† The first year of my heirloom conversion, I grew a fantastic dusky purple potato with creamy-white flesh called the Purple Viking.¬†

The next season, I planted Viking seed potatoes I‚Äôd saved, and added super-productive All Blues, which shimmered a gorgeous deep purple on the outside after washing, and once cut open, were a startling purple-blue through and through.¬†

Today, I‚Äôll be searching for All Blue potatoes, as well as this year‚Äôs new variety:¬† slender French Fingerlings with red skin, creamy-yellow flesh, and a buttery texture when cooked.

Preparation
Preheat oven to 450 degrees.¬† Cut potatoes into small wedges and put in large shallow baking dish.¬† Stir together the remaining ingredients in a small bowl and add to the potatoes.¬† Toss to coat.¬†

Bake at the top of the oven, uncovered, for 1 hour until the potatoes are crisp outside and soft inside.¬† Stir several times during cooking to rearrange potatoes, and add a little more water if needed.
¬†
Gotta go dig,¬†