Potatoes aren't known for being very profitable, but with the right approach you can take advantage of the many varieties and possibilities. 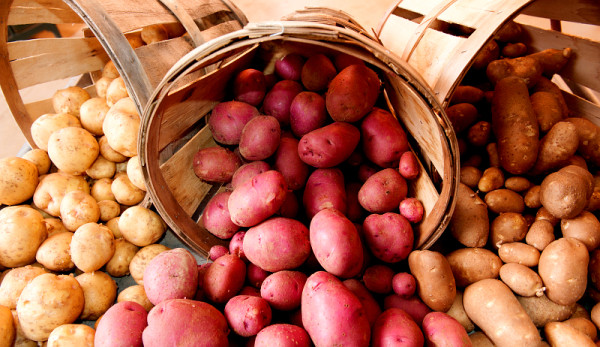 One of my favorite crops to grow can also be one of the traditionally least profitable cropsâ€”potatoes. I love potatoes. There is such a wide variety of shapes, sizes and colors that I can be found every winter drooling over the Heirloom potatoes in seed catalogs on any given day. I love planting them. I love digging them. And I love all things potato in the kitchen. But I have learned that you must be smart about your approach to potatoes, otherwise they can be a lot of work, take up a lot of space and not make you very much money.

The good news is that you can have all of your fun potatoes and sell them, too, because potatoes can be marketed in a variety of different ways. So let’s look at some of the ways you can move those spuds so you wonâ€™t feel as reluctant to grow some of the enjoyable ones.

New potatoes are the first, young, non-cured potatoes you dig. These can be small or large, but they are traditionally (at least in the U.S.) smallâ€”with a diameter between the size of a nickel and a half-dollar. (Thereâ€™s no rule to this, but we have found that people do like small new potatoes.) Be very gentle with new potatoes as you wash them, as they are easy to bruise or scratch. For marketing, fill quart or pint containers, set them on your market table and watch them fly. In retail settings, consider selling new potatoes in small clamshells at a premium but make sure to mark them as â€śNew Potatoes,â€ť as it carries a certain allure among foodies.

Marble potatoes are generally around the same size as the new potatoes but are cured and generally made of the starchier potatoes such as russets. A lot of restaurants like these to be relatively consistent in size for roasting, so think in the golf ball range. Like the new potatoes, the best way to sell them is to have them piled into quart containers on your market table as opposed to bulk. You can generally charge a premium for the packaged potatoes, and people tend towards prepackaged goods in general.

3. Sell Them In Sacks

As evidenced by the above two options, packaging is important in sales. We often find that having our cured potatoes in some kind of container is a great way to get customers to pick them up and purchase them even if they may not have come to the market specifically for potatoes. This can be difficult with large potatoes, as they donâ€™t often fit neatly into berry baskets or clamshells. But there are smaller burlap sacks available online, and when bought in bulk, they might be economical. Make sure your price reflects the true cost, but customers might appreciate the novelty of getting to buy a small sack o’ potatoes.

A simple way to sell potatoes is in bulk, by the pound where customers choose how much they want and you weigh it. A disadvantage is that that requires work on the part of the customer, and not everyone will feel compelled to go through the effort. The advantage is that piles of potatoes make your table look bountiful, which itself can have a positive effect on sales.

Chances are, unless you are an experienced potato grower with a lot of acreage and the right equipment, you cannot compete with the big growers in terms of potato prices. Restaurants buy sacks of Yukon gold potatoes for near pennies, and there is no reason for you to try to compete with that. Instead, consider growing fingerling or heirloom potatoes and marketing those to the chefs as specialty or seasonal items. These crops are generally more finicky and lower yielding, so large growers donâ€™t bother. However, chefs still look for them, so you have reason to fill that demand so long as it makes you some money in the process.

Potatoes are a great prepared food item, but what about selling just as a farmer at a stand without a stove or food handlers license? One idea Iâ€™ve had is frozen french fries. This sounds a little silly, but frozen french fries are actually really good. It has to do with how freezing affects the starches, but if you had access to a commercial kitchen, in theory you could produce and sell frozen french fries from a cooler at a significant markup to the cost of that many potatoes. This can also work with any fried potato, such as hash browns or potato hash. Another option is fresh potato gnocchiâ€”a popular doughy pasta that is fairly easy to make. Really, if you are an ambitious farmer and cook with the means to produce a lot of food within your local laws, potatoes have a lot of potential.