Do not get on your hens’ bad side. Step wrong around your poultry and they’ll let loose a string of chicken cursing that’ll make you blush! 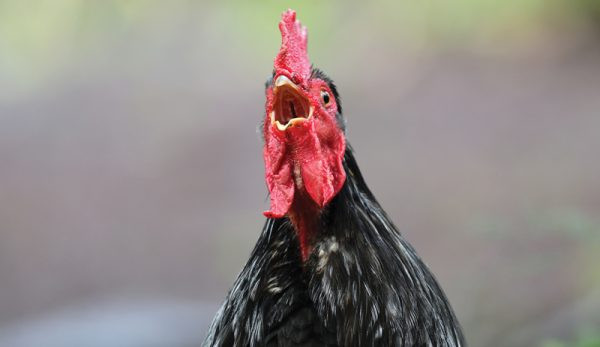 The first time my wife Elaine and I experienced a chicken cursing at us was when we had only been raising birds for a few months.

We had ordered straight-run, industrial Rhode Island Reds from the local feed-supply store. As matters advanced, we came to discover that we were now the not-so-proud owners of six cockerels and two pullets: Peggy and Little Spotty.

Five of the males found their ways into various entrées. But those meals (tasty as they were) didn’t solve our problem of possessing a paucity of pullets.

So we purchased four young females.

As I was on my knees and releasing the new members from a box into the run, I was astonished to see Peggy come running toward me, look straight into my eyes, and discharge a torrential tirade of diatribes.

For those of you who have not heard a chicken spout profanity, their expletives are best described as loud, long, harsh whines proclaiming that you, dear human, have perpetuated grievous wrongs against them.

Furthermore, as the whines increase in volume and intensity, it’s past time for this poor judgment of yours to be remedied.

After Peggy finished berating me, she turned and ran to Elaine and expressed the same sentiments. The third and last act of her performance was directed toward the quartet of newcomers, whom she berated verbally with her vocal cords and physically with her wildly whipping wings and blistering beak.

Over the years, we’ve now experienced chicken cursing—at us and each other—numerous times because of various injustices. Here are some of the more common times when your chickens are likely to start spouting venom.

Urban chickens can bring some cluck (and eggs) to your city backyard.

When We’re Late to Let Them Out

The sun rising and setting controls the length of a chicken’s day. When the sun rises, their owners had jolly well have the coop door open and the ramp down or someone will have to pay for this iniquity.

For example, we have two adjacent runs of heritage Rhode Island Reds. Each flock can tell through their windows and/or sounds of the other group when the other assemblage has been let out and they haven’t.

Just recently, I had let out the flock we call the “young birds”—consisting of mostly 1-year-olds—and was preparing to release the “old birds,” our 3-year-old and older chooks. As I was doing so, I noticed that the latter’s waterer was scummy and needed to be scrubbed before filling.

When I left their run to clean their waterer without releasing them, our older Reds spotted me through their window. And they exploded with a round of chicken cursing.

Their vituperations—even when I was out of sight—didn’t cease until I returned with said waterer and opened their door.

When We Give Treats to One Run, But Not the Other

As bad as the profanity can be in that situation, it pales in comparison to what can happen when the bone of contention is treats.

We often give our birds healthy tidbits such as fruits and vegetables. But by far their favorite dessert-type food is any kind of dough-based item such as bread crusts. I often remove the upper crests from sliced bread, tear them into tiny bits and toss them into both runs.

The other day I was in a hurry to check the eggs in the young birds’ run—the older hens were currently molting and weren’t laying—and tossed the crust slivers to them without saving any for the older girls.

You would have thought the chicken apocalypse had just struck their run as the obscenities exploded from their little beaks. It was so bad that I had to go inside and bring them a whole piece of brown bread.

I begged their forgiveness.

When No Run Receives a Treat

The only thing worse than not giving one run treats is not giving either flock something special. Then the curse words rain down in torrents.

I admit this is mostly our fault as we try to bring both flocks something several times daily.

The math skills of chickens are not all that accomplished (shall I say). And our birds have no concept of the fact that you may have given them treats five consecutive visits, but it’s OK if you don’t on the sixth time.

Their perception is that if humans appear, treats should appear. It’s that simple.

And if choice menu items don’t arrive with the Homo sapiens, then it’s time for the birds to utter broadsides chastising us for our cruelty.

Check out these 5 recipes for homemade chicken treats.

When the Nesting Box Has Been Occupied for too Long

Chickens don’t save their worst swear words just for their owners. They’re also outstanding
at lecturing their flock mates about their unjust ways.

The most likely cause of a dispute between hens is over the nesting box.

It’s common knowledge among chicken-raisers that practically every henhouse has a nesting box that is preferred by every female. And, by golly, when it’s a hen’s time to lay, she wants that box. The one next to it will definitely not be satisfactory.

When Elaine and I first started raising chickens, we would often hear chicken cursing break out inside the bird’s abode. We would come rushing outside fearing some existential threat—black snakes, raccoons, opossums—had entered into their home.

We would arrive, open the back window and merely see one chicken cursing at her compatriot about her inability to lay a timely egg.

The concept of patience is unknown to chickens.

When Birds Want Outside

Chickens relish the opportunity to be let out of their runs and forage in our yards. And two annual events at our place will make our birds start swearing worse than usual to be released.

Every July, the blackberry vines produce their pleasingly tart fruit. And every August, the cicada hatch causes these insects to alight on the blackberry and other shrubs ringing the run.

We once witnessed our birds scarfing down so many cicadas that we were sincerely worried their little stomachs would explode.

This is the one time when I truly respect chicken profanity and feel it’s justified. I mean, they’re eyeballing ripe fruit and squirming protein.

“Why in the name of all that is holy,” they seem to say, “haven’t you humans let us partake of this bounty?”

The phrase “cursing like a sailor” has existed for hundreds of years and is part of our culture. With all due respect to our cursing navy servicemen and women, they could take lessons from a chicken concerning use of four-letter words.

This article originally appeared in the May/June 2020 issue of Chickens magazine.

Bruce Ingram has been a freelance writer and photographer for more than 30 years. He has written more than 2,000 magazine articles and also five books on smallmouth river fishing. He and his wife write a weekly blog about the outdoors as well as their chickens.