Poultry can get injured, and wound care is important in case a chicken gets hurt. Here are some basic pointers for chicken wound care. 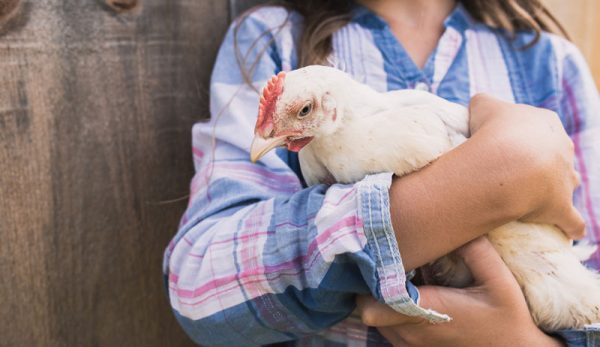 Just like all of our pets, chickens get injured. Whether it‚Äôs a dog bite, drama with a flock mate or a run-in with sharp fencing, your chicken can acquire a wound. However, a chicken is just different enough‚Äîas a bird as opposed to mammal‚Äîto make wound management a little trickier.

That being said, if you‚Äôve done some basic first aid on yourself, your kids, dogs, cats, horses, llamas, etc., you can also treat a wound on a backyard chicken. While chickens aren‚Äôt dogs, cats or even children, in general, more similarities exist than differences.

Example: If something is bleeding, you need to stop it from bleeding.¬Ý

First: Know When to Call a Vet

First of all, know your limitations. If something is bleeding excessively or you‚Äôre dealing with broken bones, puncture wounds from dogs and cats or similar emergency-type situations, your bird needs a veterinarian.¬Ý

Most veterinary schools in the U.S. offer limited, if any, training in chickens. We‚Äôre working on addressing that supply issue due to the increased demand for veterinary services for backyard poultry.

Make sure when you do use first aid on the wound that you take notice of the rest of the chicken. For example, if there is a laceration from a dog bite, don‚Äôt ignore the rest of the bird. Examine the entire bird feeling for deformities, fractures and additional injuries that might be less obvious.

Other things to take notice of include:¬Ý

Sometimes, I think Murphy must have been a veterinarian, who owned a fixer-upper house and an old car he not so affectionately called ‚ÄúLemon.‚Äù

First things first: If you have a chicken that is bleeding, remove it from the flock. Chickens are naturally attracted to blood, and they‚Äôll peck at the bleeding chicken, often making the wound worse (and it‚Äôs not pretty!).

By having a small ‚Äúsick pen,‚Äù you can house the bird temporarily until the wound heals. (Chickens don‚Äôt like to live by themselves, so long-term housing by themselves isn‚Äôt good either.)

As far as wound management, clean and flush the wound to remove dirt. Use a bathtub sprayer and/or have a 12- or 20-cc syringe can help with the flushing.

First, flush with lukewarm water, and then wash and flush with either dilute soap or very dilute betadine. (The betadine makes the water turn brown, and we‚Äôre looking for a faint brown color.) Betadine in high concentrations can be caustic to the skin of chickens.¬Ý

As far as dressings on top of the wound, you have two general choices: dressing with a bandage or no dressing and bandage. A lot of your decision on this really comes down to personal preference. You can typically get the same results either way.¬Ý

With respect to dressing, you can either use silver sulfadiazine (SSD) or manuka honey, which are both considered bacteriostatic (i.e., they prevent the growth of additional bacteria). If the injury is near the eyes, don‚Äôt use SSD because it can be harmful to the eyes.

If you use the SSD or manuka honey, put a bandage on it because both are sticky and will attract dirt.¬Ý

For a bandage, use a nonadhesive bandage and change daily, if possible. For nonadhesive bandages, I prefer Tegaderm, which you can purchase over the counter at a local pharmacy. You can put some loosely wrapped vet wrap on after the Tegaderm.¬Ý

Alternatively, clean the wound two to three times a day, and keep the wound area as clean and dry as possible. The issue I have with bandages and dressings in general is that for some birds you end up messing with them so much they often stop laying because they‚Äôre being overly stressed. From my perspective, unless it‚Äôs absolutely necessary, don‚Äôt use ointments and bandages.¬Ý

If the chicken irritates the wound, you can find equivalent e-collars online. The chicken with the e-collar isn‚Äôt usually too happy wearing one, but such is life sometimes.

When our backyard chickens are injured, our paternal instincts take over. We want to do everything possible to get them healthy as soon as possible. Unfortunately, many people tend to go overboard beyond what has been described and start to use antibiotics inappropriately.¬Ý

If the wound looks infected or if you‚Äôre dealing with a puncture wound, antibiotics may be necessary. In general, most antibiotic therapy will be selected based on culture and sensitivity of an isolate taken from the wound site. In some cases, veterinarians have an informed guess about what type of antibiotics work best.

You can use a topical ointment-based antibiotic such as Bacitracin. However, ointments as previously discussed can attract dirt.

Per the VFD, owners must now have a relationship with their veterinarian to get a prescription for antibiotics deemed medically important.¬Ý

In a hen, when any drug is administered, its ovary, follicles and oviduct are exposed to the drug. Hence, there is potential for drug residues to be present in those tissues that play an integral role in table-egg production. More specifically, the yolk and egg white can serve as ‚Äústorage sites‚Äù for drug residues within the egg.¬Ý

This is why it‚Äôs important to only use drugs and withdrawal times that are approved by the FDA. When drugs are used in an extra-label manner, the Food Animal Residue Avoidance and Depletion Program can provide an estimated withdrawal interval.¬Ý

The FDA has currently approved eight drugs for over-the-counter purchase for use in laying hens (active ingredients: amprolium, bacitracin, erythromycin, hygromycin B, nystatin, tylosin, nitarsone and proparacaine hydrochloride). If used appropriately, these approved medication formulations can be administered without any withdrawal time (i.e., the time period required to not consume or sell their eggs and meat after the antibiotic has been withdrawn).¬Ý

Due to the recent revision of the VFD, all of the previously listed drugs‚Äîexcept for bacitracin and amprolium, which is an anticoccidial drug and hence isn‚Äôt an antibiotic and therefore not considered medically important for human health‚Äîaren‚Äôt currently available over the counter.

If you think your chicken has an infection, you‚Äôll now need to have an established veterinarian-client-patient relationship in order to get a prescription to the previously-mentioned antibiotics.

In summary, basic first aid of poultry isn‚Äôt too complicated, and you can certainly do it. However, be preventative and astute so you can catch small issues before they become big deals.

As stated in the column, we want to mitigate the chance of things that lead to needing first aid in the first place. The famous line from Robert Frost‚Äôs ‚ÄúMending Wall‚Äù poem notes that ‚Äúgood fences make good neighbors.‚Äù This could be paraphrased to the less eloquent but hyper-relevant ‚Äúchickens that have good fences are more likely to have healthy and happy lives.‚Äù¬Ý

In other words, good fencing will help you avoid the drama associated with predators. With respect to fencing, chicken wire just doesn‚Äôt cut it. Unfortunately, chicken wire is far too weak and the spacing of the gaps is way too wide.

Instead, hardware cloth should be used and buried at least 4 to 5 inches underground (rodents are good diggers) with gravel placed at the fence line (5-inches wide and 5-inches deep), because rodents don‚Äôt like digging through gravel.¬Ý

This article originally appeared in the September/October 2022 issue of Chickens magazine.

Maurice Pitesky is a faculty member at University of California School of Veterinary Medicine-Cooperative Extension with an appointment in poultry health and food safety epidemiology. Dr. Pitesky earned his B.S. in biology from UCLA, and his DVM and MPVM from UC Davis. Pitesky is also boarded in Preventative Veterinary Medicine (DACVPM). Pitesky‚Äôs research interests are focused in mapping of avian diseases, food safety epidemiology and in gaining a better understanding of small scale poultry production with respect to environmental sustainability, poultry health and food safety.

12 Chicken Ornaments To Decorate Your Poul-Tree¬Ý