Does the female praying mantis bite off its mate's head? Are some of them pink? What do they eat? 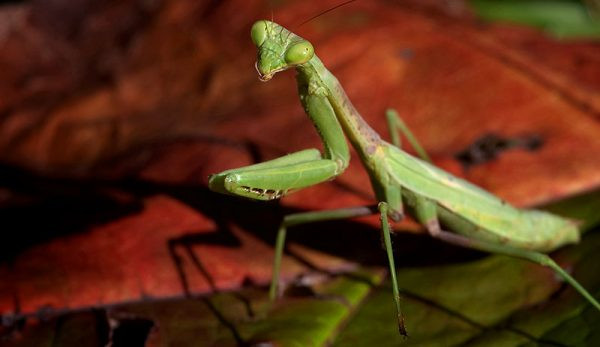 One summer, my husband broke a kneecap and our lawn mower in the same week. Though the events were not related, it meant our nearly 3/4 of an acre lawn went without mowing for most of the summer. When we finally got a new mower and the knee had healed, we had lots of overgrown lawn to tackle. When we got to mowing, one thing became very clear: what seemed like a dormant, sad lawn, was in fact, a thriving ecosystem and haven for the insects of our neighborhood. The prominent figure among the blooming brush was the elusive praying mantis.

Animated sticks of varying shades of brown and green hopped out of the way as the mower moved slowly past; we found them adjusting to their new surroundings for the rest of the afternoon and into the next day. We felt a pang of sympathy for destroying the space they had come to call home, so we left a patch near an unused part of the yard just for them and the other summer critters. This mysterious and otherworldly experience got us wondering about the praying mantis. We wanted to know more. So here are answers to seven questions commonly asked about the praying mantis.

1. Can a Praying Mantis Bite?

Yes! But the bite from a praying mantis is rare, and it usually occurs only when the insect is provoked. Bites are not venomous and cause little harm to humansâ€”so there’s very little to worry about.

This is a good question to answer before we go much further. Most people say “praying mantids” when speaking of more than one mantis. However, the true answer is that it varies based on species. “Praying mantises” and “praying mantes” are each correct plural forms. “Praying mantid” refers to the entire group of these insects.

3. How Many Species of Praying Mantises Exist?

All mantids are adept carnivores, efficient killers of other insects with an impressive neck length and head rotation that lets them capture a wide range of other bugs. They can kill pray nearly three times their size, including snakes and tiny turtles. They have an impressive bite thanks to their strong mandibles, while their green or brown coloring and long, slender figure help them blend in seamlessly to surrounding foliage. Mantids are considered one of the gardener’s best insect friends.

5. Do Females Really Bite Off the Heads of Males During Courtship?

This is true for some species of mantids. However it’s worth noting this occurs in only about one-third of all mantids, so it’s not as common as some people believe.

In North America, these otherworldly insects are not on the endangered species list, but they are critically low in population because of habitat destruction,all around the world.

7. Are There Really Pink Praying Mantises?

Yes! The species we are most familiar with in North America are either lightly spotted brown (to camouflage near the ground), or bright green (to camouflage in spring and summer vegetation). However, a species called the Flower Mantis can range in varying shades of white and pink to disguise itself among flowers.

Knowing what I now know about mantids, I think we’ll keep a nice big patch of wild flowers and tall grass each year … preferably near the garden.