Praying Mantises in the Garden

In May, I purchased a praying-mantis egg case from a local nursery and put it out into the garden. A few weeks later, the eggs hatched, and initially, several hundred baby praying mantises were clinging to my plants. 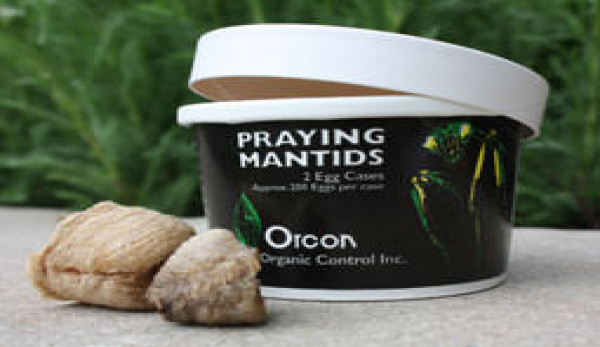 In May, I purchased a praying-mantis egg case from a local nursery and put it out into the garden. A few weeks later, the eggs hatched, and initially, several hundred baby praying mantises were clinging to my plants. Now that it’s August, there are far fewer of them, but I still manage to see one mantis nearly every day.

The mantises nearly fully grown now, and the one I spotted today even had fully functional wings, rather than developing wing pads. Each praying mantis is about 3 inches longâ€”hard to believe they were once small enough to comfortably sit on my thumbnail.

Each praying mantis species has an elongated thorax and a triangular head that is capable of rotating 180 degrees in each direction. They have two large, compound eyes and three small, simple eyes in a triangle between the antennae.

Praying mantises are consideredÂ beneficial insects in the garden because they are ambush predators. They will, however, eat a bumblebee or a ladybug as quickly as they’ll eat a squash bug or anotherÂ pest. They spend nearly all their time waiting to snatch their prey. And they nab their prey so quickly that the action is almost missed by the human eye.

Most praying mantis species produce only one generation per year, with eggs laid in masses encased in a protective layer of dry foam and secured to twigs or stems.

The most common introduced species in the U.S. is the European mantis. These insects can be distinguished from other praying-mantis species by a circular bullâ€™s-eye mark on the inside of their forelegs, plus their egg cases are elongated. Chinese mantises, the ones I introduced to my garden, are slightly larger than European mantises, and females produce a globular egg case in autumn. The third-largest population of introduced praying-mantis species is the narrow-winged mantis, which is most often found in the southern U.S.