Protect Your Livestock From Predators With Old-School Methods

Keep your cattle, pigs, goats, sheep and chickens safe from threats by various predators with these tried-and-tested techniques. 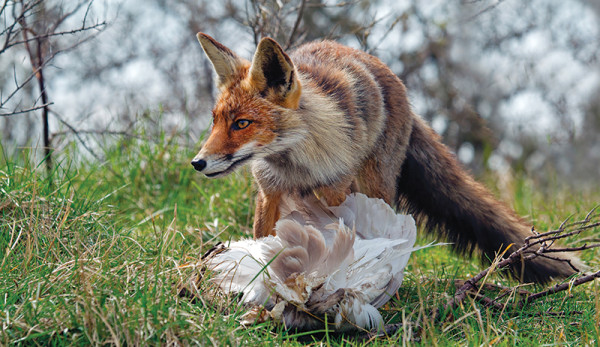 A few summers ago, a family of red foxes laid siege to my family‚Äôs farm. More to the point, these predators discovered our flock of laying hens. Daily, we lost at least one bird to the animals‚Äô jaws.

The experience was devastating; my wife and I would run outside at hearing a rooster‚Äôs alarm, stare helplessly at our agitated flock, and then spot the feather trail leading to the adjoining woods. We loved our chickens and ached for the losses, but there was an additional layer of grief to the carnage: We‚Äôre market farmers, and eggs are our most profitable offering. Every hen the foxes dragged to their den depleted the eggs we could sell. It didn‚Äôt take our customers long to notice we were running low, and they dispatched ‚ÄúMr. Chicken‚Äù to talk with us.

‚ÄúI had that problem some time ago,‚Äù said Mr. Chicken, a man about my age with a dubious claim to the self-appointed title. ‚ÄúWanna know what I did?‚Äù I did. ‚ÄúI paid a guy to come out and install the highest-powered electric fence they make.‚Äù

Mr. Chicken stated that a fox touching this fence stood a not-so-decent chance of survival. He conceded that some chickens met their fate to voltage, too, but he counted those acceptable losses.

While I‚Äôm sure Mr. Chicken‚Äôs fence kept his pastures clear of foxes, I wasn‚Äôt sure that was the route for this underfunded father of three young children. While we do have movable electrified fencing around our pig pastures, I was more interested in looking to the old‚Äîand less expensive‚Äîways of adding layers of protection the rest of our farm. I wondered how livestock farmers of yore protected their flocks and herds from predatory animals. After some research and general asking around, I assembled the following (certainly not comprehensive) list of a few old-school predator control techniques.

Our ultimate defense against unwelcome foxes was a dog named Blue, an Australian shepherd we‚Äôd raised from a puppy and whose guardian instincts manifested as fierce dedication to our flock of free-range chickens. He quickly developed a sense for predator presence and dispatched of the threat with fierce barking and determined pursuit. The foxes soon moved on, their free lunch spoiled by a family pet.

While Blue sleeps inside on a dog bed after the hens are locked up for the night, most livestock guardian dogs are raised with their assigned animals, with which they imprint at an early age. The most commonly seen LGD is the Great Pyrenees, typically used to protect goats and sheep against coyotes, wolves and mountain lions in the U.S. and other predatory animals across the globe. Other common LGD breeds include the Maremma, Kangal and Akbash. Australian shepherds are not typical LGDs‚Äîthey‚Äôre herding animals by nature‚Äîso Blue‚Äôs herd-saving guardian instincts were a lucky happenstance for our little farm.

Dogs aren‚Äôt the only livestock guardians, either. Standard-size donkeys and llamas are often fenced with sheep and goats to defend against wild dogs and coyotes, as both are naturally aggressive toward canine threats and can be trained as protectors. And don‚Äôt forget feline friends: Rats eat young chicks and eggs, and barn cats are the best defense against rodents.

In our first year, our farm flock was targeted by a red-tailed hawk. After a few regrettable losses, I consulted the owner of a large, organic farm that operates in our region, and he shared with me his secret to deterring hawk attacks: fishing line. ‚ÄúI honestly don‚Äôt know why it works,‚Äù he says, ‚Äúbut it does.‚Äù

After trying fishing line, I agree: It works. The technique is simple: Create fishing-line spokes from the coop to stakes surrounding your chicken area. If your chicken yard is fenced, you‚Äôre halfway there; if not, simple posts will suffice. Attach one end of the line to your coop and the other to a post; repeat, using another line, for each post until the area is covered by a web. Hawks, with their keen eyesight, see the lines and won‚Äôt drop into the area below, protecting chickens from aerial attacks.

We‚Äôre quick to rail against industrial farming for the evils it visits upon the world, but mention should be given to what‚Äôs lost when monocultures reign supreme. Chief among these losses is the functionality of diversified farmsteads; there are reasons farmers of yore raised more than just one crop or creature and why most folks saw fit to raise a pig or two.

As a hog farmer, I can provide a laundry list of reasons to raise an animal once referred to as the ‚Äúmortgage lifter‚Äù‚Äîand bacon is, of course, at the top. But one minor benefit of a porcine presence is the pig‚Äôs deterring influence on predators. Here‚Äôs the logic: Pigs stink. And pigs are close relatives to wild boars, aggressive creatures woodland predators have learned to avoid. So having some stinky pigs on the farm sends an olfactory warning to predators that your acreage is less than prime for hunting. Pasturing pigs around a farm‚Äôs perimeter gives predators even more motivation to steer clear.

While chickens, sheep and goats are the livestock animals most in need of protection, cattle also face threats from predators such as coyotes, mountain lions, dogs and bears. Predators that aren‚Äôt put off by a cow‚Äôs size will encounter a quick-to-flee beast that makes for easy picking.

But cows weren‚Äôt always so docile, says animal expert Temple Grandin, who claims that reteaching cattle dormant defense techniques is not only possible but the key to reducing loss. She believes that ranchers mimicking a predator can trigger a herd‚Äôs ‚Äúbunching‚Äù instinct‚Äîas wolves prefer running prey to an animal that stands its ground, a herd that gathers tight in the presence of a predator can be an effective deterrent. Grandin outlined a low-stress method for triggering this instinct in a 2015 issue of BEEF magazine, where she also advised that weak animals be removed from the herd. In the same article, Grandin advised to leave predatory breeds not affecting herd damage alone, arguing that killing indiscriminately invites replacement animals that may not pose an active threat‚Äîan attitude once common before the advent of firearms.

One of the most effective predator deterrents for a chicken flock is‚Äîa chicken! Roosters are especially helpful in free-range flocks, where male birds act as guardians and defenders of the ladies. While a good rooster can‚Äîand will‚Äîfend off smaller predators, the bird‚Äôs best defense is as guardian, scanning the ground and sky for trouble and sounding a loud alarm when trouble arrives on the scene.

When provided in adequate numbers‚Äîthe general rule is one rooster for every 10 to 12 hens‚Äîroosters guard against common daytime predators such as foxes and hawks by issuing a loud crow that sends hens running for cover and alerts farmers of clear and present danger. A rooster will also adeptly locate forage for his harem of hens, over which he‚Äôll stand guard while they dine. Some chanticleers, however, can become indiscriminately aggressive, posing harm to children or pets with their long, sharp talons; those birds are best suited for stew service.

Modern farmers don‚Äôt need to dump their electric fencing for pig perimeters and¬Ýsplit-rail fences in order to see value in alternative methods of protecting livestock. Farming is a fluid endeavor that invites both hacks and time-tested solutions, and sometimes the fix for a problem at hand is found beyond the farm-store shelf. Humans have raised animals for a long time; however we keep them safe today is the right way to farm.

This story originally appeared in the July/August issue of¬ÝHobby Farms¬Ýmagazine.