In the second installment of a three-part series, we examine calving and a common post-calving problem in cattle known as milk fever. 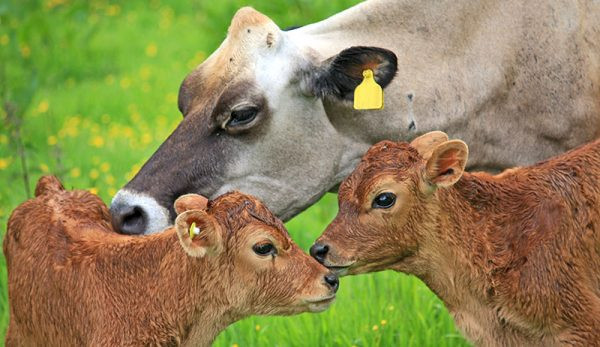 Last month we examined some trials and tribulations of pregnancy in sheep and goats. This month we look at cattle.

A cow’s gestation length is roughly nine months, like a human’s. Cows during pregnancy typically carry a single calf, but twins are not uncommon, though not preferred, as the calves tend to be smaller. Triplets are rare and typically do not survive, whereas quadruplets are almost impossible, except for a rare case in Texas in 2015.

When a cow during pregnancy nears calving she typically acts somewhat agitated and might separate herself from the rest of the herd. The calving process may take a few hoursāin this species, you shouldn’t expect things to happen quickly, which is much different from horses, as we’ll learn next month. Heifers in particular might take several hours to calve. The key for monitoring a calving is to check on the cow or heifer periodically to make sure she’s making progress. If not, then its time to make sure things are OK.

The typical position for a calf to present through the birth canal is two front feet and a snout. Given this, there are a few general categories that can result in a difficult calving, also called a dystocia:

If you are comfortable checking, make sure your arms and hands are clean and well lubricated and that the heifer or cow is safe and secure. Although some farmers are reluctant to check themselves, if you are clean and careful, there’s no harm and that’s how you learn. When in doubt, however, call your veterinarian.

One condition that commonly occurs to cows, particularly dairy cows, shortly after calving is something called milk fever, also known as parturient paresis. It does not, as the name suggests, have any infectious or āfeverā qualities about it but is instead a metabolic condition.

When a cow begins to produce milk, large amounts of her own calcium are lost in the production process. Calcium is needed at a certain level in the body at all times, as it is required for the proper conduction of nerve impulses and for contraction of muscle cells. As a cowās blood calcium levels become quickly depleted via heavy lactation, her metabolism can’t compensate.

As a result of this rapid calcium depletion, the affected cow begins to show a set of clinical signs that are so common you can almost diagnose milk fever over the phoneāand in fact many experienced dairy farmers will diagnose this condition themselves and know how to treat it successfully. A cow suffering from milk fever will at first act wobbly and have trouble walking. Fine muscle tremors might show themselves. More dramatically, she may fall and have trouble getting back up. This is usually the farmerās first sign that something is wrong. After a few more hours, the cow will be unable to rise.

Upon further inspection at this stage, a cow with milk fever will usually have cold ears, as her circulation becomes affected. Additionally, she will normally be fairly quiet in demeanor.

All cases of milk fever are emergencies. This is because, after the cow is down, in a few more hours, she will become comatose. At this stage, the cow usually doesnāt survive. Luckily, most farmers are astute observers and check their cows regularly; therefore most cases of milk fever do not make it to this terminal stage. So, how do we treat milk fever? Calcium, of course.

Administering IV calcium is the way to cure milk fever and definitely one of the most immediately rewarding. Usually after one 500 mL bottle of IV calcium, the cow is standing and possibly making her way shakily to the feed bunk. Many times, especially if sheās a large cow, a second bottle will be given under the skin for a slower release of calcium over the next few hours. Baring other complications, most cows need treatmentĀ only once.

One thing to note: Calcium itself is toxic to the heartāgive it too quickly and youāll give the poor thing a heart attack. I can guarantee the first handful of milk fevers I treated, I administered the calcium so slowly I believe the farmers started to wonder what was the holdup. Eventually you get a feel for the correct speed at which to administer treatment.

Somewhat counterintuitively, the best way to prevent milk fever is to provide a diet before lactation starts (called the dry period) that is relatively low in calcium. This forces the cowās body to ramp up her own bone resorption of calcium, which conditions her body to quickly replace calcium loss in the milk. Many dairies can greatly reduce their cases of milk fever through proper nutrition.