Prepping for a Natural Disaster

Audrey Pavia Keeping farm animals in the city can be a real hoot. Follow freelance writer Audrey Pavia’s adventures in Southern California with a yard full of urban livestock, including horses, chickens, a Corgi and an urban barn cat. She somehow manages all these silly critters by herself while working full-time. And you thought “The Simple Life” […]

Audrey Pavia
Keeping farm animals in the city can be a real hoot. Follow freelance writer Audrey Pavia’s adventures in Southern California with a yard full of urban livestock, including horses, chickens, a Corgi and an urban barn cat. She somehow manages all these silly critters by herself while working full-time. And you thought “The Simple Life” was out there? City Stock – Prepping for a Natural Disaster – Urban Farm Online 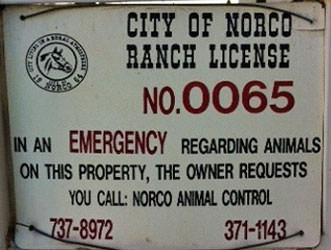 In case of emergencies, my urban farm is registered with the city.

Hurricane Sandy shook me up. The storm‚Äôs fury was unleashed nearly 3,000 miles from me, but as a former New York City resident, the photos of the devastation made a big impact.

I don‚Äôt have to worry about hurricanes in Southern California, but I do have to think about earthquakes. Seismologists tell us “The Big One‚ÄĚ (earthquake) will hit Los Angeles someday. Even though I‚Äôve been hearing this since I was a kid, I can‚Äôt help but think it‚Äôs probably true.

So what will I do with my animals if a huge tremor knocks out power and water service for days or even weeks at a time? Sandy made me realize I need a plan.

Evacuation is unlikely in the event of earthquake. We‚Äôll just have to hunker down and wait for services to be restored. That means having enough water for three horses ‚ÄĒ who drink several gallons a day ‚ÄĒ six cats, three dogs, two rabbits and seven chickens. Oh, and three humans: me and my two roommates.

Bottled water will do for the birds and smaller mammals, but it would take a whole lot of bottles to keep the horses hydrated for a week. This means I need to go out and buy a couple of 50-gallon plastic barrels and keep them filled with water.

Food is the other issue. My roommates and I have enough stuff in the pantry to last a month, but we also have a tendency to let our pet‚Äôs food get down to nothing before we go out and buy more. Probably not a good idea. Even though we live in an urban environment and the nearest PetSmart is only 2 miles away, you never know how things will be in the aftermath of a very destructive earthquake.

increased awareness of the need to have a disaster prep plan also made me realize it‚Äôs a good idea to take a pet first-aid course. I‚Äôd learn to not only give CPR to cats and dogs, but also how to mend broken bones, stop bleeding, deal with shock and more. My friend Arden teaches pet first aid, and I‚Äôm going to sign up for a class this week (petfirstaid4u.com).

I‚Äôve already have some measures in place: My ranchette is registered with the city so that, in the event of an emergency, animal control has authorization to enter the property and rescue the animals. The cats and dogs are also fitted with microchips, tags or both.

I hope I never have to put any of this stuff to use, but it sure does give me peace of mind knowing I‚Äôm prepared should disaster strike my urban farm.