Pretty Up Your Plate With A Mix Of Edible Flowers

Young buds and full blooms can add floral notes to salads, desserts and refreshing teas. Here are some edible flowers to add to your plate this year. 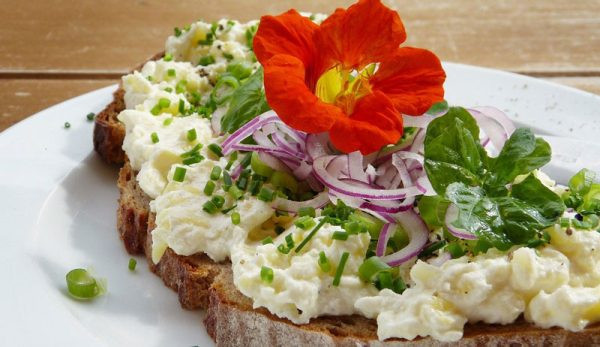 We may grow ornamental flowers for their fragrance, their beauty or their ability to attract beneficial insects. But as for eating the blossoms we grow? Well, technically we already do consume certain edible flowers.

â€śBroccoli and cauliflower are just buds of flowers, so what’s the difference between eating buds and [eating flowers] once they open?â€ť Brad Biren asks. Educated at Cornell University’s College of Agriculture and Life Sciences, Biren has worked as a landscape architect and botanist.

Over the years, he’s also become a self-described flower eater. â€śI grow them and love to eat them, because it makes me feel like I am eating summertime itself,â€ť he says.

Spicy nasturtiums and versatile daylilies aside, roses are one of Biren’s go-to recommendations for the uninitiated. â€śThey’re a great beginner [edible] flower plant, because the petals are not fibrous and they kind of taste like you are eating perfume,â€ť he says.

â€śIt’s like a lettuce that almost dissolves in your mouth.â€ť

When harvesting rose petals, be sure to separate them from the rose hips. â€śThe rose hipâ€”in that little globe at the bottom [of the bud]â€”can break your teeth,â€ť Biren warns.

Ideally, you should pick roses to eat before their blooms fully open. Also, more fragrant rose species will pack a bigger culinary punch. Add rose petals to salads, candy them for dessert, or use them to make rose water or a simple rose syrup.

Read more: Want to sell nasturtiums but unsure how? Check out these tips for pricing and marketing edible flowers.

While plenty of flowers are edible, some varieties taste better than others. In her work, The Edible Flower Garden, Author Rosalind Creasy recalls, â€śI collected a number of modern lists of edible flowers and cautiously began my taste testing. Some were absolutely horrible!â€ť

She continues, â€śFor example, some marigolds have a slightly lemony taste, others are tasteless, but the taste of most falls somewhere between skunk and quinine.â€ť

(Her early encounters with edible carnation petals were equally unpleasant.)

Nevertheless, both marigolds and dianthus (carnations) are among Biren’s favorite edibles. â€śDianthus and marigold should be consumed [similarly],â€ť he says. â€śMuch like popping the cap off of a mushroom stalk, you break the petals off of the fibrous base of the flower that houses the seeds.â€ť (That fibrous base section is where very bitter or astringent flavors can hide.)

Sunflowers are also edible, but stick to the ray flowersâ€”the colorful petals arranged around the flowers’ central discs. â€śSunflowers are not one single flower but rather an entire flower stalk [made up] of thousands of individual flowers spun around themselves,â€ť Biren explains.

â€śThe flowers in the central disc, which make seeds, are not typically pleasant to eat. The petalous flowers on the outside are ray flowers and they can be plucked and consumed.â€ť

Borage flowers are Biren’s go-to for something light and refreshing. â€śThey are the most beautiful azure flowers,â€ť he says. â€śYou put them in water with a couple of slices of cucumber peel, and it is heavenly.â€ť

Whatever edible flowers you choose to grow, you should think carefully about your containers and pest management practices. â€śIf you’re going to use a wooden, raised bed, make sure it doesn’t contain the preservative chromated copper arsenic,â€ť Biren says.

â€śThe other thing is not using galvanized steel for the [raised bed] brackets. Galvanized metal is a heavy metal that can harm people.â€ť

He adds, â€śEven though plants do an excellent job of fixingâ€”rendering the heavy metals inertâ€”part of that is being taken up into their cells. So, let’s leave that in their cells and not eat those plants.â€ť

Ideally, you should forgo pesticides, too. â€śThe number one thing people do for integrated pest management for edible flowers is grow them in a contained system like a greenhouse,â€ť he says. â€śAnd, so, those little packets you might see at the grocery storeâ€”those are all grown inside of greenhouses where they can control what animals are not there.â€ť

Read more: Daylilies are common in the garden, as well as edible and sweeet.

Depending on when you harvest, you could end up with more than just pretty blossoms. Flowers that remain open outside for longer than a day or two could be contaminated by pathogens from birds and other animals. If you’re able, harvest flowers at the bud stage and then bring them indoors.

This may reduce your potential exposure to pathogens.

Picking short-lived flowers is another good option. â€śPansies and violets … open up every morning, so, really how much contamination can they get in an hour or two outside?â€ť Biren says.

â€śSo, harvest them [right away.] Put them on a slightly moistened wet paper towel, lock it in a gallon-sized bag, and put it in the refrigerator. They’ll last about two days. Or you can always freeze them.â€ť