Are your hogs cooped up in the barn over winter? Keep your herd healthy by livening up their surroundings with some simple 'pig-richment.' 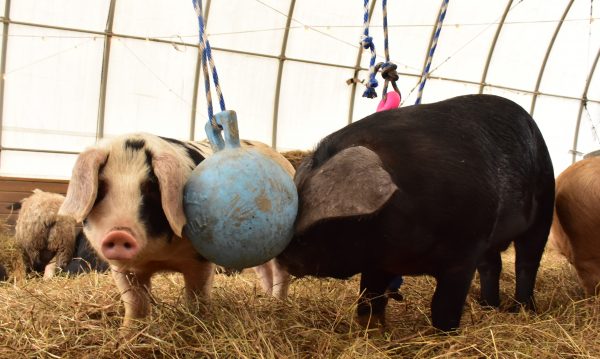 By January, most pigs have been moved closer—to the farmer and to each other. To protect pastures after growing season ends, many farmers pull pigs from the fields and group them into hoop barn housing with deep bedding, barn stalls or sacrifice areas on deep piles of wood chips. Every year it’s a transition that brings boredom—for the pigs and humans both.

Pigs have evolved to play.

They root, they chew, they climb and wrestle—and not just for food. Pigs are naturally busy and curious. The move from a world of plentiful natural stimuli in the fields and woods (roots, sticks, rocks) into the confines of a barn can lead to restlessness. It can also lead to health issues in the herd.

Anxiety, boredom and even depression are real and can manifest in vices such as tail-biting, fighting, aggression and destruction of gates, equipment and farmer sanity. Bored pigs are noisy and unsettled, thus more susceptible to stress, disease and poor weight gains.

Environmental enrichment for pigs, henceforth known as pig-richment, is not crazy, and it’s not new. Lengthy studies, albeit mostly in the UK, are accessible online with various deep dives into the best materials to use, how to present them and how to know if they are working.

For the beginner in the craft of barn carnival ringmaster, simple materials such as straw, untreated wood, mulch or natural rope added to a pig’s surroundings can go a long way to help meet needs of chewing and exploration.

This year we ‘leveled up’ on our farm and have begun presenting actual toys to our hogs—for maximum enjoyment of both the farmer and the animal.

Feed sacks, strips of fabric, cardboard, logs, old hoses, spent Christmas trees … pigs can transform just about anything into a toy. But there are commercially available options for those ready to splurge on their herd.

You’ll find that most pig enrichment toys sold in online stores have one thing in common: They are suspended to the height of a pig’s head.

Study after study, as well as practical experience, confirms that once a toy has become soiled with dung, pigs lose interest and your purchase is rendered ineffective. Old bowling balls thrown into a stall pen are best saved for play in an open field or pasture—unless you hire a full-time bowling ball cleaner.

Pig-richment is more popular across the pond, and shipping for these pig-specific toys can be cost prohibitive. Chew toys for large dogs suspended from natural rope can withstand chewing and tugging and provide hours of entertainment. Jolly Balls made for horses are also great time-killers for the farmer wishing to decrease productivity by getting caught up in a thrilling game of barn tetherball between two playful hogs.

Just like kids, pigs can lose interest in their enrichment toys after a week or two. So we rotate materials and chew options every few weeks, letting our pigs be the guide. If we walk into the barn and no one is playing with the toy, the fun has probably run its course.

Is there anything that makes a bad pig toy? Yes, there are limits.

Treated wood is a no-no, and so is any material that, when inevitably torn up and mixed with bedding, will damage equipment as the bedpack is removed in the spring. So no burlap or wire or metal. And make sure all the staples in the cardboard have been removed to avoid injuring your pigs.

Get in the Game

For those on a budget, you can become a human pig toy to provide winter enrichment.

A 1988 study from Temple Grandin coined the term “assertive mingling” to describe a simple practice of wandering the barn, approaching pigs and petting them—with or without their consent—for ten minutes once a week.

This small gesture drastically reduced excitability scores compared to pigs that were never handled. In the study, the pigs that were also provided suspended hoses to chew on in the last five weeks of finishing registered lowest on the stress test at harvest time.

Pigs efficiently stimulated by their environment are happier, fatter, easier to handle and, ultimately, make pork of a higher quality than those raised in barren environments.

So buy toys for your pigs. Play with your pigs. And if anyone gives you grief, tell them pig-richment is science.