Hand-pick these metallic pests off your grapes, berries and corn to prevent them from ruining your crop. 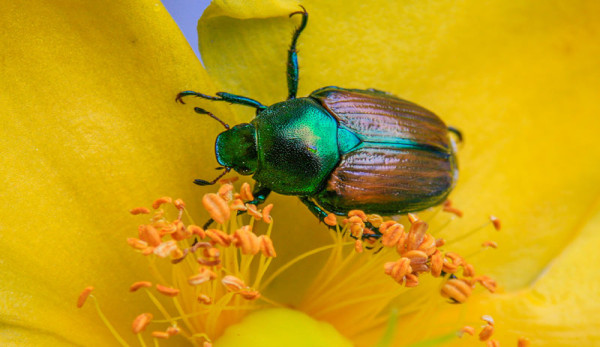 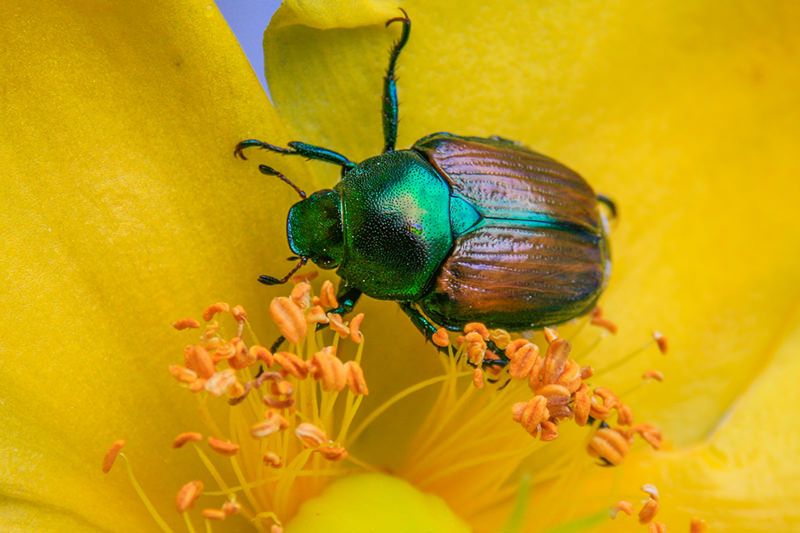 This summer the Japanese beetles were hard at work here on the East Coast. Sure, everyone knows about the damage that these invasive beetles and larva can do to your roses, your lawn, and other ornamental plants, but they can do some extreme damage to your vegetable garden, as well.

Adult Japanese beetles are roughly oval-shaped and reach about 1/2 inch long or slightly smaller. Their appearance is quite distinctive, making them pretty easy to identify. They feature a metallic green head with shiny copper to brown wing covers.

Damage In The Garden

Around the garden, adult beetles will feed on a range of plants including blueberries, grapes, corn, soybean, rhubarb, and both raspberries and blackberries. The beetles target the foliage on the plants and will quickly skeletonize the leaves. Japanese beetles also are known to attack the silk on corn crops, preventing pollination and causing production problems. A large population of these invasive beetles in your garden can lead to pretty severe damage if theyâ€™re left unchecked.

So what can you do to slow or eliminate these annoying and destructive beetles? Organic sprays are relatively ineffective on these robust pests. The best organic solution unfortunately may be removing them by hand. Try hand-picking Japanese beetles early in the morning and throwing them into a bucket of soapy water. The cooler morning temperatures may help to slow down the beetles, making them easier to grab.

Avoid the classic Japanese beetle pheromone traps regularly sold at big-box stores. Studies have shown that the traps will certainly collect hundreds or thousands of adult beetles, but the trap will also draw many more beetles onto your property, attacking the very plants youâ€™ve sought to protect. The best use of a Japanese beetle trap may be as a present for an unsuspecting neighbor down the street in a slightly devious attempt to draw some of these beetles away from your yard.

If you do insist on using a trap, make sure it is far away from your plantings and consider adding a large white plastic bucket of soapy water beneath to catch additional beetles drawn to the lure. There are also some promising introduced biological controls, including several fly and wasp species that may be able to put a damper on Japanese beetle populations in areas with the right climatic conditions.