Prevent Meningeal Worms in Your Herd

Small ruminants can contract meningeal worms from white-tailed deer on your farm. Learn about the risk and how you can keep your animals safe. 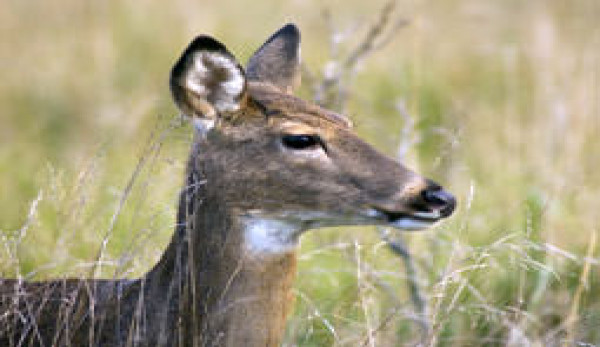 A herd of white-tailed deer running through your field is a lovely picture, but for those who keep small ruminants, deer are not a welcome sight. The white-tailed deer is the host for an internal parasite called the meningeal worm (Paralaphostrongylus tenius), also called the brain worm or deer worm. The deer tolerate the parasite fairly well because itâ€™s the deerâ€™s natural parasite, but in an unnatural host, including goats, llamas, alpacas or sheep, the meningeal worm can do a great deal of damage and can even cause fatalities. (Note: Cows are not known to have problems with meningeal worms.)

â€śProblems occur if goats graze in areas where deer bed down or routinely graze. The intermediate hosts of the parasite are [terrestrial] snails and slugs. Deer ingest these as they graze,â€ť she says. â€ś[Goats, llamas, alpacas and sheep] like to eat fallen leaves. Since snails hide under leaves, itâ€™s easy for the animal to ingest them.â€ť

If the snail or slug carries the infective stage of the meningeal worm larvae, it can move through the deerâ€™s gut and into the central nervous system where they mature and produce eggs. The eggs are then excreted by the animal, and the meningeal wormâ€™s life cycle starts over.Â

In unnatural hosts, after 10 to 14 days of ingestion, the larvae migrate straight to the brain and spinal cord. They donâ€™t mature into adults; instead, they move through the central nervous system, causing swelling, which damages the tissue and creates neurologic symptoms. If the larvae are in the animalâ€™s spinal cord, symptoms include a limp or weakness on one or more of its legs or partial or complete paralysis. If the larvae are in the brain, symptoms include blindness, head tilt and circling.Â

Most parasitic infestations can be diagnosed through a fecal test; however, because the meningeal worm in the ruminant doesnâ€™t produce eggs or larvae, fecal tests arenâ€™t useful. A necropsy exam is the only way to diagnose meningeal worms. Because there are many other issues that mimic meningeal-worm infection, such as caprine arthritis encephalitis (CAE), scrapie, rabies or copper deficiency, sometimes testing the cerebrospinal fluid of a live animal helps to diagnose meningeal worm infection in the brain.Â

Treatment for meningeal worms usually includes large and repeated doses of dewormer (such as ivermectin, levamisole, albendazole, thiabendazole and fenbendazole) accompanied by steroids. However, once the animalâ€™s nervous tissues have been damaged, thereâ€™s nothing that can be done to repair them.Â

Parasite managementÂ is important with all parasite control, but doubly so with meningeal worms because theyâ€™re so difficult to detect and cure. As most farmers know,Â keeping deer away from aÂ garden or livestock is nearly impossible. Therefore, try to keep ruminants out of pastures where thereâ€™s heavy deer traffic, or fence the livestock out of ponds and woodlands. Remove animals from pasture when itâ€™s wet and cool (a time when snails and slugs thrive), especially if the pasture does not drain well. A goodÂ deworming program designed by your veterinarian can also help. Itâ€™s important to understand that indiscriminate use of dewormers can lead to parasite resistance.Â

About the Author: Sharon Biggs Waller is an award-winning writer and author of Advanced English Riding (BowTie Press, 2007). She lives on a 10-acre hobby farm in northwestern Indiana with her husband, Mark, 75 chickens, two Lamancha goats, two horses, and an assortment of dogs and cats.

How To Build & Use Your Own Plant Press