Prevent Swarming In Your Spring Hive

With a little care and attention, you can prevent a spring swarm, keeping your hive strong and in tact. 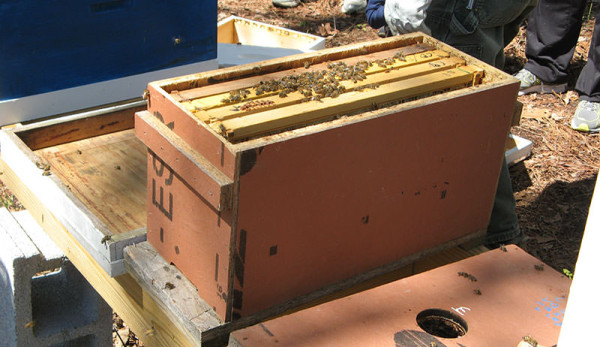 It’s that time of year again. Â Spring has been teasing us for weeks, winter makes a brief encore (in the form of a rather dramatic blizzard), and then, seemingly without warning, the sun pushes its way out from behind rain clouds and it’s reliably warm. Every day. In my neck of the woods in western North Carolina, the daffodils come up first. But soon, in quick succession, we have an abundance of dandelions, purple dead nettle and an array of fruit blossoms, all for the bees to feast on. The race to fill the supers has started!

With the floral smorgasbord comes the queen cells. The bees are as eager to get started on the season as the peopleâ€”probably more so!â€”and if conditions permit, they are busting out of their hives within a matter of weeks. Spring is a precarious time for honeybees, though; warm temperatures have them active, leaving the hive often and using up winter stores quickly, but there’s not always much in bloom for them to replace it with just yet.

This is where you come in, trusty beekeeper: Check your hives weekly in the spring. In the first early spring inspection, you might find you need to move supers around to put the brood nest back on the bottom (the queen likes to move upwards in her laying pattern) and to perform a quick check for queen cells. If your bees still have plenty of honey, great, but don’t think they’re out of the woods yet. At the next week’s inspection, you may not even open the hive but do a quick heft test (lifting the hive to get a sense of its weight) to determine how much honey they still have. If it’s light, plan to feed them if necessary.

During the third week’s inspection, you’ll probably want to get back into the hive again. If flowers are blooming and temperatures are consistently warm, be on the lookout for queen cells. These long, peanut-shaped cells are the beginnings of swarm preparation. In those cells, workers will raise new queens for when the swarm takes the old queen to start a new colony. Most beekeepers don’t like to let their bees swarmâ€”not only do you lose very valuable livestock, but there’s no guarantee that those bees will survive where they decide to live. This is especially true for urban beekeepers.

Successive swarming, where a colony casts off swarm after swarm after swarm in the same year, significantly weakens the hive. This point brings us to the next two important spring tasks: giving the bees more space and making a split, both in the interest of deterring swarming.

If you do see queen cells, you’ll have to decide how you want to approach the situation, asÂ it means the wheels are already turning towards swarming. How you do depends on where you live, your style of beekeeping, how strong your colony is, and what your intentions are moving forward. This is where good research and solid intuition used together really pay off. Your options include but aren’t limited to:

Even as a natural beekeeper, I’d strongly encourage you to keep your bees and not allow them to swarm if at all possible. While swarming is the sign of a truly strong and healthy hive, those bees will be more likely to survive and thrive in your apiary rather than out in the world, where they may be removed, sprayed or destroyed.

Spring is one of my favorite times of year, and while the flowers and sunshine usher hope and rejuvenation for all of us, we must take our roles as beekeepers seriously and make time to tend to them. Feed them if they run out of honey stores. Conduct regular inspections until the honey flow gets rolling and to stay on top of swarming actions. The best way to thwart swarming is by giving your colonies more space before the season takes off. And, of course, make your splits: Whether you sell them for profit or expand your apiary, everyone wins!