Frying peppers are the oft-forgotten pepper—outshone by bell peppers and hot peppers—but deserve gardeners' and hobby farmers’ attention, too. 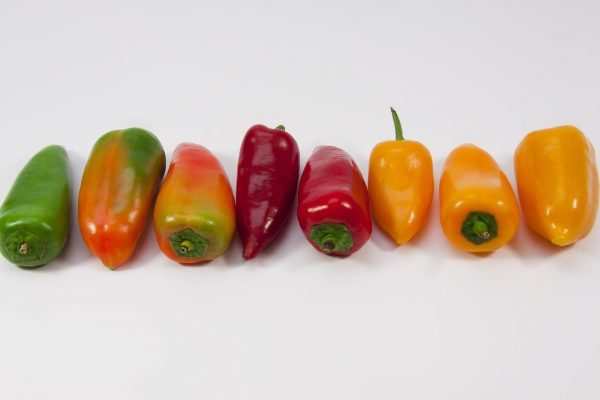 I first ate a grilled sweet frying pepper in 2013—well into my 30s—and it wasn’t by choice. The grill guru at the cookout that day put one on my plate alongside a farm-raised beef brat and slabs of grilled zucchini and onions. I didn’t want to be rude and object to such a despicable thing as a pepper on my plate, so I tried a bite.

I ate that whole frying pepper and two more afterward. I had no idea peppers could taste like this.

To me, bell peppers taste watery, bland, maybe even bitter, but rarely are they sweet. Frying peppers have thinner skins than bell peppers, a truly sweet taste and none of the bitterness.

I’ve even heard their taste likened to a pear.

Frying peppers come in all colors: red, orange, yellow, green and purple. These are longer and thinner than bell peppers, almost looking like beefy hot peppers. When packing CSA shares, we’d have to bag and label sweet peppers and hot peppers separately so shareholders wouldn’t get a spicy surprise.

I have a favorite variety, though I’ve come around to appreciating others in recent years. Carmens were my first sweet frying pepper love—deep red and prolific producers—and remain my No. 1.

Look for other Corno di Toros types or any of the Marconi types. Heirloom peppers are worth some attention, as well, such as the Italian Jimmy Nardello and Baker Creek Heirloom Seeds’ Ajvarski, a frying pepper from North Macedonia.

Check out these 4 tips for overwintering your pepper plants.

How to Grow Them

Being a pepper, frying peppers grow just like bell peppers or hot peppers. They do best when started indoors and transplanted after the threat of frost.

You can even try overwintering peppers from year to year—though hot peppers may be more well-suited to this experiment.

We think of peppers as hot-weather plants, but extreme heat and sun are no good. The pepper plants might like partial shade or a spot in the garden alongside some taller plants that can offer partial shade to their fruits.

Check your soil test and be sure there’s a good amount of phosphorus. As a fruiting plant, frying peppers need this. They want nitrogen, too. Michigan State University has excellent in-depth info about when and how to add nutrients to your pepper patch.

Frying peppers also need regular watering to get established and for good fruit development. For water retention and to reduce weed pressure, mulch them with straw upon transplanting or after their first cultivation. Or plant them into plastic or paper mulch.

Many varieties of sweet peppers are large-fruit producers, which can weigh down the plant. You don’t want your plants flopping over and fruits coming in contact with the ground, so be prepared to stake your sweet pepper plants. You can also treat them like tomatoes with cages, a trellis or a Florida weave.

As nightshades, frying peppers are susceptible to flea beetles, though less so than eggplants. Give them a head-start with row cover, and remove the row cover when they start forming blossoms and the plants are a bit stronger.

Learn about the best peppers to grow in patio pots.

How to Eat Frying Peppers

Grilled is still my favorite way to eat sweet frying peppers, though they can find a place in many dishes.

For breakfast, I love fried sweet peppers with balsamic vinegar alongside a fried egg. As a snack, raw frying peppers are perfect for hummus dipping.

Sweet red frying peppers are the ones to use for making roasted red peppers. They’re easy to chop and freeze for use all year long, too.

The use of frying peppers (instead of bell peppers) are the only way I’ll eat my mom’s sausage, peppers and onions. I replace bell peppers with them in recipes whenever possible.

In next year’s garden, save a pepper spot or two for frying peppers and see for yourself. Fire up the grill for your first harvest, and you may find that you’ll need a bigger patch the next year.

These Herbal Bath & Body Products Bring The Garden To The Tub