This herb, with tastes of cilantro, is little known in the U.S., but papalo deserves a place in more culinary herb gardens. 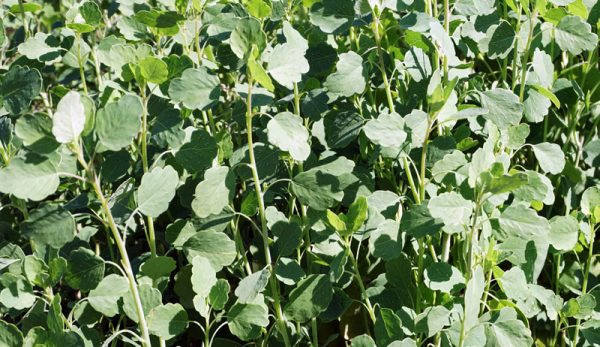 Before I was a farmer, I was a traveler. Visiting new places introduced me to new-to-me flavors. More than that, it reinforced for me the idea that flavors exist beyond my imagining. Papalo (Porophyllum ruderale) is one of these flavors.

I didnâ€™t find it on the road. Rather I started learning about this Latin American herb thanks to others that Iâ€™d come across.

Think cilantro meets lime with a little pungency and, some say, mint. This is papalo, or papaloquelite in Spanish. Itâ€™s ubiquitous in Mexican cuisine. It grows so well in hot weatherâ€”unlike cilantro, which likes to bolt at the first sign of heatâ€”that it makes an easy summertime cilantro replacement.

You might also find papalo under the names yerba porous and poreleaf, so called for the pores visible on its wide, flat leaves.

Learn the secret to getting the best cilantro crop ever.

How to Grow Papalo

Papalo is easy to grow once you get it started. Starting it is the trick.

The first year I grew papalo, I followed the seed-packet instructions, which explain germination is less than 50 percent. I really wanted to give this herb a fair try, so I seeded a tray with eight seeds, hoping two would germinate.

With beginnerâ€™s luck, seven of the eight germinated! I had a forest of papalo that year.

The second year, just one of the eight seeds germinated, which gave me a more reasonable amount of the herb to use on my own but not enough to sell. I still think itâ€™s best to err on the side of too much papalo and continue to over-seed with the hope that I can have all I want plus more to share.

Because the germination rate is spotty, itâ€™s best to start seeds in trays and then plant into the garden, lest you have big holes to fill in your crop rows. Transplant papalo seedlings about 2 feet apart after the chance of frost has passed. It is a tropical plant and loves hot, humid weather.

Keep it watered but not overly so. Mine didnâ€™t exactly thrive during a few weeks without rain in the summer, but it didnâ€™t wilt, either.

How to Harvest Papalo

The plant will grow as tall as you. Keep harvesting at branching points, 6 inches or so from the tips, to cut back the plant and prevent it from getting leggy, as you would basil. Smaller leaves are less pungent than larger leaves.

Papalo will continue to produce all summer and will eventually produce seed pods as daylight shortens and nights get cool. These pods are lovely and will resow in the deep south.

One plant produces many seed pods, so consider how wise it is to allow self-sowing in your garden.

Try papalo as a substitute in this recipe for honey cilantro dressing!

How to Use Papalo

Like I said, papalo is similar to cilantro, so I use it as a cilantro substitute in the following ways:

Donâ€™t cook this herb. Rather, add it at the end of cooking or use it in raw dishes. Itâ€™s a bit stronger than cilantro, so start off easy and add more to taste.

I loved the papalo pesto that I made and froze. It was a delight to pull the summertime flavor out of the freezer to toss with sweet potatoes in mid-winter.

Like cilantro, it doesnâ€™t retain its flavor when dried, so fresh or frozen while suspended in oil are the ways to keep papalo around longer.

This prolific herb will add a new taste, and possibly a new favorite, to your summer garden.