Promiscuity Could Save Hives from Collapse

Scandal alert! A new study finds that queen Honey bees share information about their mating status that could be vital to hive survival. 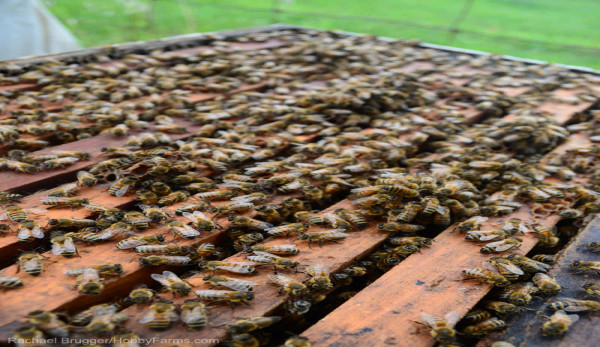 Queen bees convey honest signals to worker bees about their reproductive status and quality, according to an international team of researchers, who say their findings might help to explain why Honey-bee populations are declining.

“We usually think of animals’ chemical signals (called pheromones) as communication systems that convey only very simple sorts of information,” said Christina Grozinger, professor of entomology and director of the Center for Pollinator Research at Penn State University. “However, this study demonstrates thatÂ queen Honey bees are conveying a lot of nuanced information through their pheromones.

“In addition, until now, no one knew if queen bees were manipulating workers into serving them or if they were providing valuable, honest information to workers. We have found that the information queens are conveying constitutes an honest message about their reproductive status and quality. The queens are ‘telling’ the workers that they are queens, whether or not they are mated, and how well-mated they are. In other words, whether or not they have mated with a lot of males.”

Why do worker bees care if their queen is well-mated? According to postdoctoral fellow Elina NiĂ±o,Â  previous research has shown that colonies headed by more promiscuous queensÂ  (i.e., those who mate with many males) are moreÂ genetically diverse and, therefore, healthier, more productive and less likely to collapse.

“Beekeepers have been very worried about their queens since they seem to not be lasting as longâ€”a few weeks or months instead of one or two years,” NiĂ±o says. “We know that workers will replace their queens when they are not performing well. So if worker bees are able to detect poorly mated queens and take steps to remove them, that could be an explanation for the rapid rates of queen loss and turnover that beekeepers have been reporting.”

The researchers, who represent Penn State, North Carolina State University and Tel Aviv University, describe how they assigned queen bees to a variety of treatment groups. They report their findings in the Nov. 13, 2013, issue of PLOS ONE.

The researchers then dissected the queen bees, removing two glands that are known to produce pheromonesâ€”the mandibular gland and the Dufour’s gland. Next, the team extracted the glands’ secretions and analyzed their chemical compositions using gas chromatography-mass spectrometry. Finally, the researchers presented the gland extracts to worker bees and observed the extent to which they were attracted to different extracts.

“These results suggest that queens are signaling detailed and honest information about their mating state and reproductive quality to workers, and workers are capable of adjusting their behavior accordingly,” NiĂ±o says. “When workers replace failing queens, it is particularly damaging to beekeepers since it can take up to three weeks for the new queen to begin laying eggs and another three weeks for the new workers to emerge as adults. This reduces the workforce and therefore reducesÂ honey production and even pollination efficiency.”

The team also found that the mandibular gland and the Dufour’s gland differ in their functions.

“The Dufour’s gland seems to inform workers that queens have mated, while the mandibular gland seems to indicate the queen’s mating quality,” NiĂ±o says. “This also means that these glands are likely being regulated via different neurophysiological pathways.”

According to Grozinger, in addition to signaling queen-bee reproductive status and quality, queen-bee pheromones regulate how fast workers mature and transition from taking care of developing larvae to foraging outside the hive.

“It is possible that changing the quality of the pheromone could disrupt this and other processes, which could have large-scale effects on colony organization and survival,” she says.

Through funding from the USDA, the researchers are beginning to examine the effects of viruses, pesticides and poor nutrition on queen pheromone quality to see if the queen also is providing workers with information about her health.

“The more we know about what affects the queen’s health the better chance we will have of creating high-quality queens and disease-resistant stocks of Honey bees,” NiĂ±o says.