The sticky substance that aggravates beekeepers benefits collective and individual honeybee health. Researchers have triggered bees to forage for more resin to produce propolis, and so can you. 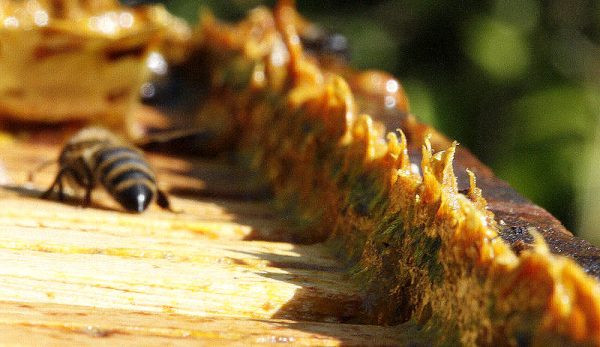 Propolis is the resinous goo that honeybees use to seal up cracks and holes inside their hives. It can give beekeepers fits. During hive inspections on hot days, for instance, the taffy-like propolis clings stubbornly to tools, clothing and hands. And, in winter, the specialized â€śbee glueâ€ť becomes oddly brittle and rock-hard. Of course, propolis doesn’t persist within hives to inconvenience beekeepers. In fact, the sticky stuff serves several important purposes for the colony as a whole and for individual honeybee health including immunity boosts and guarding against certain parasites. Researchers have developed a way you can encourage bees to forage more often for resin used in creating propolis.

From beekeepers’ time-tested observations, we already know a lot about how honeybees use propolis. For starters, it’s a kind of embalming agent. Recounting one beekeeper’s experience, The Hive and Honey Bee Author L.L. Langstroth noted, â€śA snail without a shell having entered one of his hives, the bees, as soon as they observed it, stung it to death; after which, being unable to dislodge it, they covered it all over with an impervious coat of propolis.â€ť

Honeybees encase intruding mice, wax moths, beetlesâ€”virtually any foreign object too large to removeâ€”with propolis. They also use propolis to reinforce weak spots in the hive and eliminate unwanted points of entry. For their part, feral bees often coat the walls of their cavity nests with propolis to form what researchers have dubbed a â€śprotective envelope.â€ť

So, what makes propolis protective and what exactly is it, anyway? In recent years, entomologists have uncovered some compelling new details. Bee colonies with higher levels of propolis might be a pain to work, but their pathogen loads appear to be reduced, and the larval food that nurse bees make has increased antimicrobial activity. After painting hive interiors with propolis extract, researchers reported less chalkbrood and less American foulbrood than in control colonies without the extra propolis treatment.

Honeybees collect resin (like the one pictures above has done) from treesâ€”pine, birch, beech and elm are particularly good sourcesâ€”as well as from the young leaves of vegetative plants. Incidentally, resin collection isn’t exactly easy. Depending on the weather, it can take between 15 minutes to an hour for a forager to fill up. First, she uses her mandibles to pull off and chew up the resin. Then she packs this material little by little into her pollen baskets. Once full, she returns to the hive, where it can take workers another 15 minutes to free her from the sticky load. Still, all that effort is worthwhile.

With the known benefits of propolis for honeybee colony healthâ€”not to mention other benefits still to be discoveredâ€”some beekeepers are trying to encourage their bees to use more propolis, and research published in The Journal of Economic Entomology in 2018 suggests that stimulating bees to spread more propolis throughout managed colonies is relatively easy. The study’s authors write, â€śThere is a reason to think that resin collecting is at least partially under genetic control; resin-foraging specialists are more sensitive than pollen foragers to tactile information, specifically a gap between two plates or a rough sandpaper surface, and they respond to these stimuli by collecting more resin.â€ť

With that in mind, could deliberately introducing rough or uneven surfaces in a hive trigger resin-foraging behavior? And, if so, what kinds of tactile sensations would be most stimulating for resin foragers?

To find out, the researchers compared honeybee responses to three complex wall textures as well as one smooth-walled control. For one texture type, they stapled plastic propolis trap material to some hive interiors. To create a second texture, they made shallow, parallel cut marks into other hive interiors. And for a third experimental texture, they roughed up interior hive walls with a mechanized, wire brush.

They found that, while all three texturized interior walls spurred more propolis use than did the smooth-walled control hives, the propolis trap material and the wire-brushed treatments showed more consistent benefits over time. That means beehive manufacturersâ€”and hobbyists building their own hivesâ€”might do well to use rough lumber. If your current equipment is baby-smooth inside? You might want to rough it up with very coarse sandpaper or a wire brush. (Oh, and learn to love rather than loathe all of that extra propolis.)