Adding liquid ballast to your tractor tires can significantly improve performance, but it's hard to know which ballast offers the best overall solution. 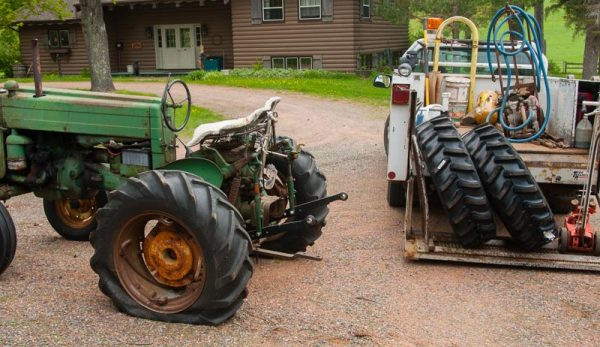 Adding liquid ballast to your tractor tires can significantly improve performance in so many respects.

You will increase traction and lower your tractorâ€™s center of gravity (a plus for negotiating sloping terrain). Also, youâ€™ll also be able to counterbalance the weight of heavy implements, improving performance and safety.

But with so many types of liquid ballast to choose from, itâ€™s hard to know which offers the best solution for your specific needs. Letâ€™s explore the pros and cons of five common liquid ballasts:

Pros: Adding water is certainly the simplest way to gain tire ballast. Itâ€™s inexpensive, readily available and safe to use.

Cons: At 8 pounds per gallon, water isnâ€™t as heavy as other options. It also freezes at a relatively warm temperature (32 degrees F), which introduces the risk of expanding ice separating the tire from the wheel rim. As a result, water isnâ€™t suitable ballast in areas with cold winter weather. The last thing you need is frozen tractor tires when youâ€™re ready to plow the driveway or snowblow you fields.

Read more:Â Here are 5 ways to counterbalance your tractor.

Pros: Calcium chloride has historically been a go-to choice for several reasons. When mixed with water, the solution can withstand temperatures down to -50Â°F or -60Â°F. Itâ€™s also inexpensive and weighs about 40 percent more than straight water.

Cons: Calcium chloride is famously corrosive and can cause significant damage to wheel rims. Inner tubes can help alleviate the issue, but calcium chloride can also be hazardous to handle, making it a less desirable choice than in the past.

Pros: An increasingly popular option, beet juice is heavier than water (weighing about 11 pounds per gallon) and resists freezing down to -35 degrees F. Even better, itâ€™s not corrosive or toxic, avoiding the major cons associated with other liquid tire ballasts.

Cons: Really the only disadvantage to beet juice is the price. Itâ€™s a more expensive solution.

Pros: A relatively inexpensive solution, windshield washer fluid freezes at a much lower temperature than waterâ€”typically -20 degrees F or less, depending on the formula.